Walking home down Belmont last night, I noticed a rather nutty bike parked outside a bar. Quick sketch with a copic marker and a pale gray brush-tip pen caught the gist of it fairly well. A classic example of kids' bikes adapted for adults...with style being a bigger consideration that safety, of course. 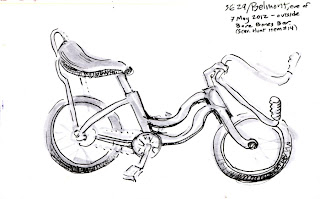 Wandering further down the street, there was quite a party going on at the park--at which I sketched this bike that was crazier by far: 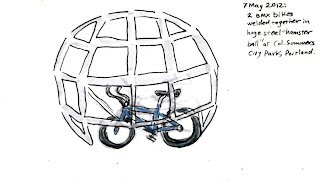 OK, it was actually two blue BMX bikes welded together side-by-side; I've simplified it for the sake of clarity in this sketch. The bikes were attached to a giant welded steel dome that I can only describe as a sort of hamster-cage. I suspect that when the riders slam on the brakes, they may well end up doing a full summersault with the cage rolling them in a flip before they come to a landing. (You'll be happy to know that there were two bike helmets hanging from the hamster-ball structure, by the way.)

I had intended to look for a stretched out cargo bike, one of those that hauls a whole heap of children on the front or back, for this element of the scavenger hunt--but these two raised their hands so charmingly, I just couldn't resist!
Posted by Katura at 10:28 AM