It was a big group, with sketchers stretched for a block in either direction, on both sides of the street.  I'd gotten there late and found an unoccupied curb and sat down to do my own sketch. 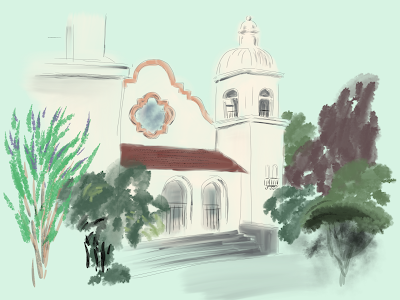 And then, another sketcher just down the curb a bit. 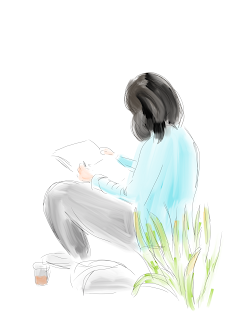 Here's a photo of many, but not all of the sketchers who came out to sketch in Laurelhurst today. We had several new sketchers today, too. I hope everyone comes back again! Most of us sketched the church, but you'll have to wait for someone else to post a good photo of the resulting sketches.

Sketchcrawl in the neighborhood

Gregg was coming down from Seattle for the weekend, so Vicky organized a special sketchcrawl for him, in my neighborhood.

Most people headed towards Trinity Cathedral.  But I'd done the red doors (or at least one of them) recently and headed the other way, to William Temple House.  And, seeing how Oliver lived only next door, I stopped by to see if he was receiving visitors.  And he was.  In fact, he climbed up into my lap and took a nap.  And so, instead of sketching William Temple House, I sketched Oliver.
  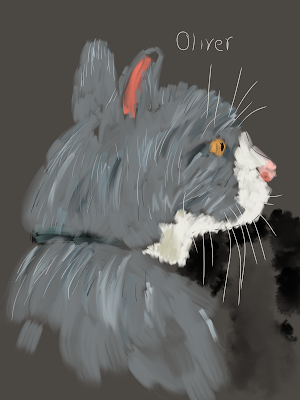 I got done with that before he showed any sign of getting up, so I picked the second most interesting thing I could see - the entrance to the apartment building across the street.
  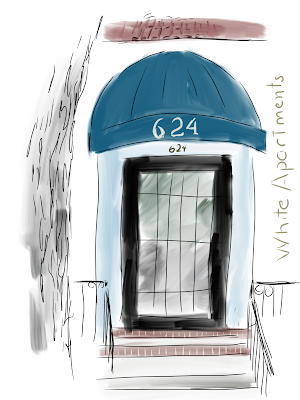 Halfway through that a black cat tried to sneak into Oliver's territory, and he had to get off my lap to evict him.  And then Kalina and John and John's dog, Trevor, showed up, looking for sketchers.  For Gregg in particular.  We chatted for a bit and I scratched the dog's ears, and then they went off towards Trinity.  And Oliver, who had been lurking nearby, came out and gave me a right what-for for having paid attention to a mere dog.  And climbed back up into my lap.

When I was done with the second sketch, and had shifted the cat, I wandered over to Trinity myself, and had time to do a quick sketch of the northeast corner of the cathedral. 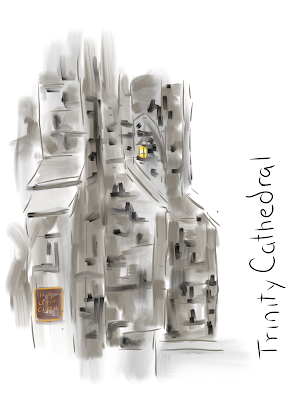 Exciting announcements about the 10x10 Urban Sketching Workshops in Portland

We are at a midpoint with out 2018 edition of 10x10 Workshops–with 5 more workshops still happening through November. There are still a few spots open in each one. For more information and to register: http://www.portlandsketcher.com/p/workshops.html

This coming Saturday, August 10th I am teaching “All the World's a Stage: Finding your Perfect Story” where I will be showing students how to draw human figure and how to approach a large public setting as a theatre stage where people act as if actors in a play, how to find those stories and convey them using drawings.

Then on September 8 Andrea Matthews takes sketchers to the popular PSU Farmer’s Market to explore how textures, lines and color could be used to approach such a vibrant setting full of colorful produce, flowers, foliage, and people busy shopping.

On September 29th I am back teaching “Humbled but not Overwhelmed: Keeping your Sketcher’s Cool in Large Complicated Spaces” which will give students the tools to break down and simplify large complicated spaces in order to capture soaring cathedrals, train stations, stately museums while visiting foreign lands or sketching in their home town.

On October 13th during the “Drama Queen or a Great Manipulator: Making Sketches that Intrigue and Grab Attention” I will reveal a number of magic techniques and sketching secrets that are sure to lead to sketches that turn heads and force second takes. This workshop will take place in the gorgeous Lan Su Chinese Garden.

Then, the drumbeat please…. because for the closing workshop of the season we are bringing the amazing Pete Scully to Portland to teach “All Together Now and with Perspective: Fitting all Bits and Pieces into a Grid” (November 10). If you are not familiar Pete is a highly revered urban sketcher, teacher and author who is a master at capturing complicated interiors with fantastic detail and precision. Pete Scully has authored several books on sketching and if you haven’t seen his work his blog is one place to start: https://petescully.com/

Happy Sketching!
Posted by Rita Sabler, USk Education Director at 10:14 AM No comments: 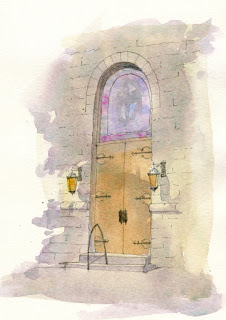 The corner of SW Park and Jefferson seems to be a hub of activity--from tour buses, people on rental scooters and bikes, and all kinds of eccentric characters passing by! In the midst of the hubbub, the shadows played peacefully on the doors of St James Lutheran Church. 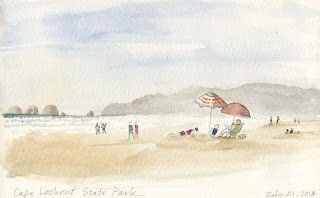 When it's hot in Portland, often it is cool at the beach.  We spent some misty, even chilly, days there recently and loved every minute of it.
Posted by Janene at 9:15 PM No comments: