It's been quite a while since I've been able to join you on a Saturday. I've so enjoyed seeing the posts of your work, though. Thought I would share a couple of things I've been doing, even though I haven't been with you all.

These are two of the historic houses in Oregon City, Dr. John McLoughlin's house on the bottom, and the Dr. Forbes Barclay house above. Both are managed by the Park Service now, as part of the Fort Vancouver interpretive site, and are open for tours: 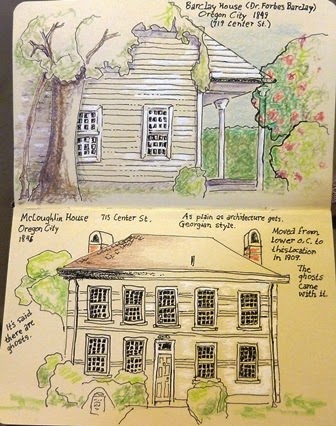 These are Micron pen and colored pencil, with some white Signo pigment ink.

Being on a toot for historical houses, I stopped outside the Ermatinger House one afternoon. I was short on time and didn't have a sketchbook with me, but did have a Micron, so did these loose ones on a piece of manila envelope. Ermatinger is undergoing restoration, and is presently up in the air awaiting installation of a new foundation. 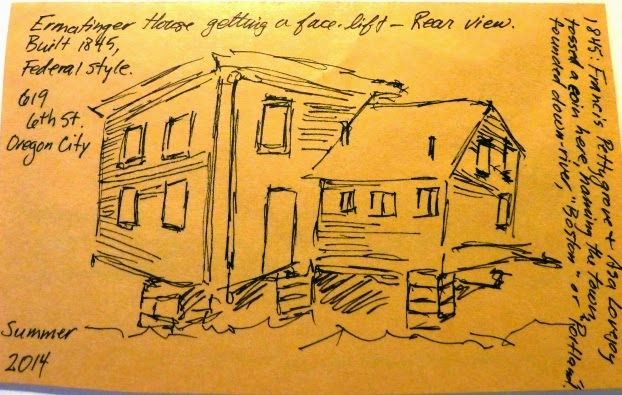 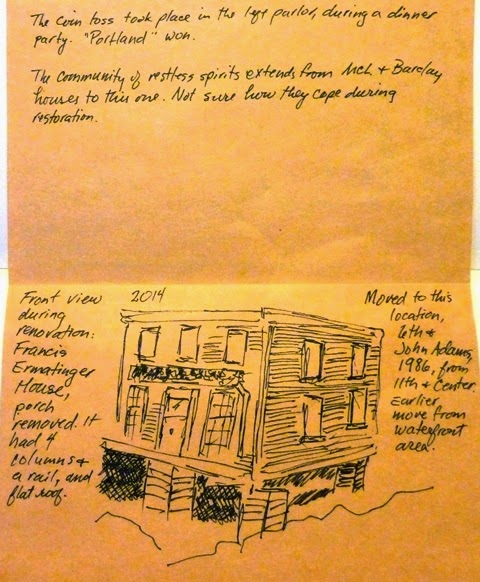 At its original location near the waterfront in Oregon City, this is the house where, in 1845, Asa Lovejoy and Francis Pettygrove tossed the fabled coin that decided the name of Portland, Oregon. Several moves over the generations have left the house unstable, hence its current surgeries. When it's put back together, I imagine it will have its flat-roofed front porch, columns and railings restored.

Sketching at the 'Fields' in NW Portland

Am trying to get out as much as possible to sketch and squash down those feelings of envy viewing the posts from Paraty (usk symposium in Brazil)....Vicky and I met at the Fields in the Pearl for a morning of sketchng.
It is a great spot with all of the construction going on and those ubiquitous cranes in the air...love it!


Not sure what Vicky meant about comparing the scenes since we all know that no two sketchers ever do the same scene alike! And that is the fun of it.


The next day I was in Portland again. Checked out the setting up at the Art in the Pearl and did a couple of sketches around there.


There are a couple more sketches from these two days on my blog.
http://www.reason2draw.blogspot.com

Going Back to the Fields

Last week, I sketched again at the Fields park in NW Portland, starting with paint. I didn't finish it, so I returned today to finish the painting and to add the ink. I think I was sitting in a spot that was nearly the same as last week, but the weather, the sun, the cranes, the sky and my perception had all changed in a week. It felt kind of like solving a puzzle to try to finish what I was seeing last week. I ended up taking lots of liberties and changing some things  significantly. I hadn't realized how hard it was to return to the scene. 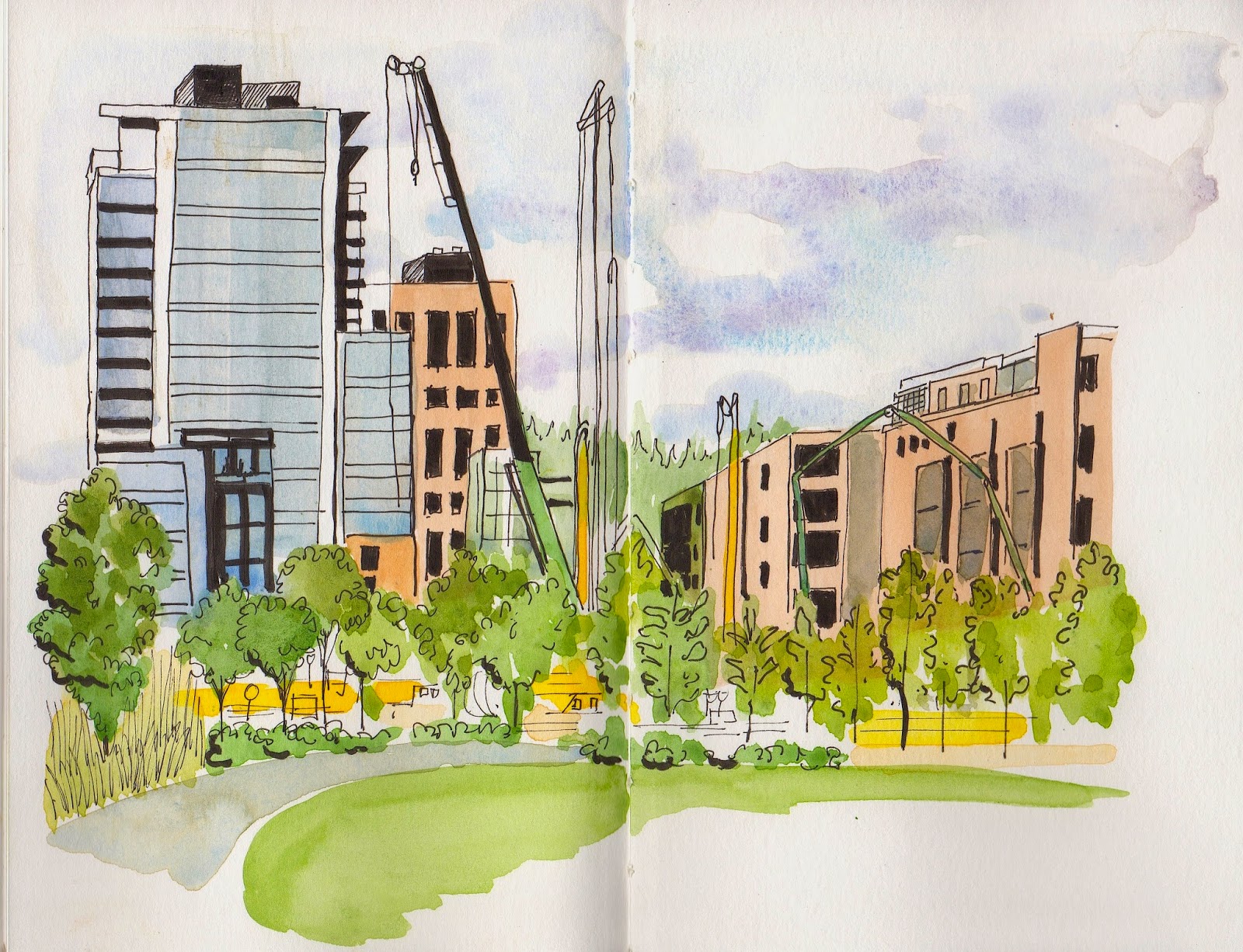 When Deb posts her sketches from today, you are likely to notice that many things are different from what you see here. Don't look too closely!
Posted by Vicky at 3:32 PM 2 comments:

Email ThisBlogThis!Share to TwitterShare to FacebookShare to Pinterest
Labels: The Fields, Vicky Porter

Portland 23 Year Ago - THE END

This last group of sketches completes the 360 degree panorama.  I want to thank everyone for their comments, they were encouraging.  Some of you suggested doing the series again, I would like to repeat the exercise 23 years later, it's on my list of things to do in retirement.  The challenge will be getting access to the Irvington Street Loft's roof deck once again, let me know if you have any ideas on how to do this.  I want to especially thank Vicky for her lessons on how to post sketches.
Posted by Gregg at 5:22 PM 1 comment:

Email ThisBlogThis!Share to TwitterShare to FacebookShare to Pinterest
Labels: Gregg Stewart
I posted these on my Facebook page, but since many of you did not see these, here they are...sample pages from the week my wife and I took our two youngest grandchildren to the beach (Neskowin) earlier in the month.  It's been said that we should choose subjects that inspire us, so in this case, I certainly did!  Done on a Moleskine 9X12 WC sketchbook. 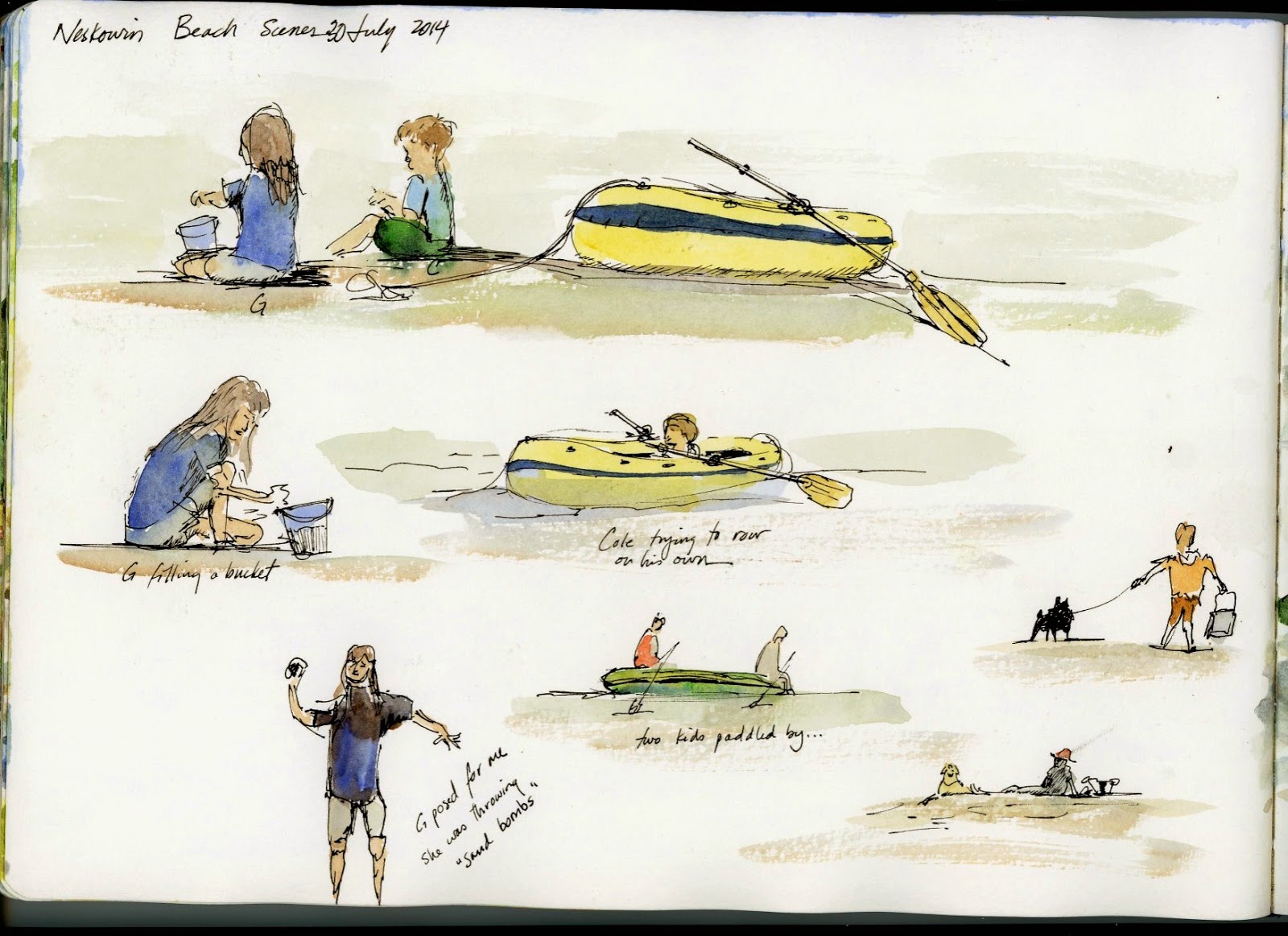 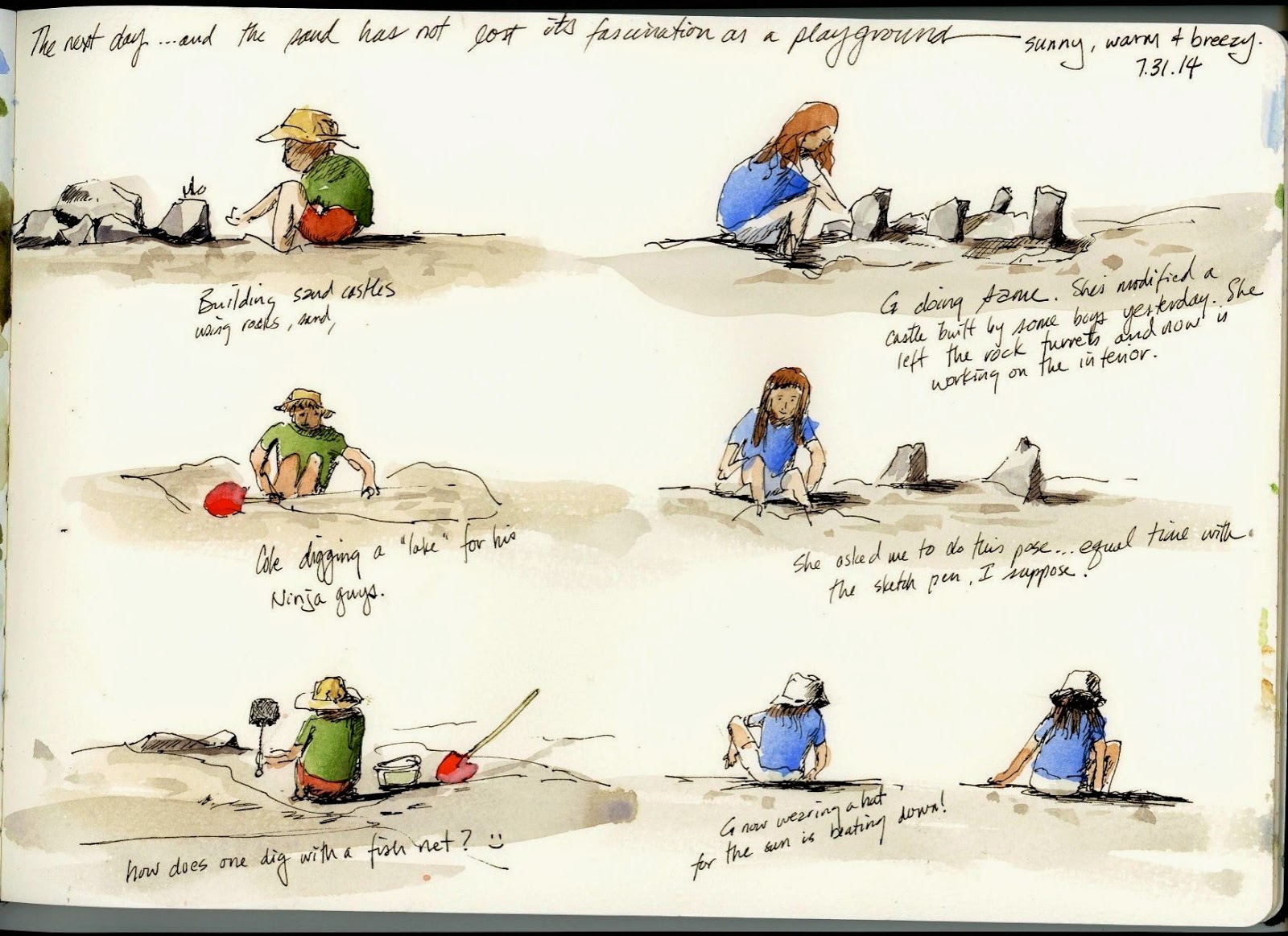 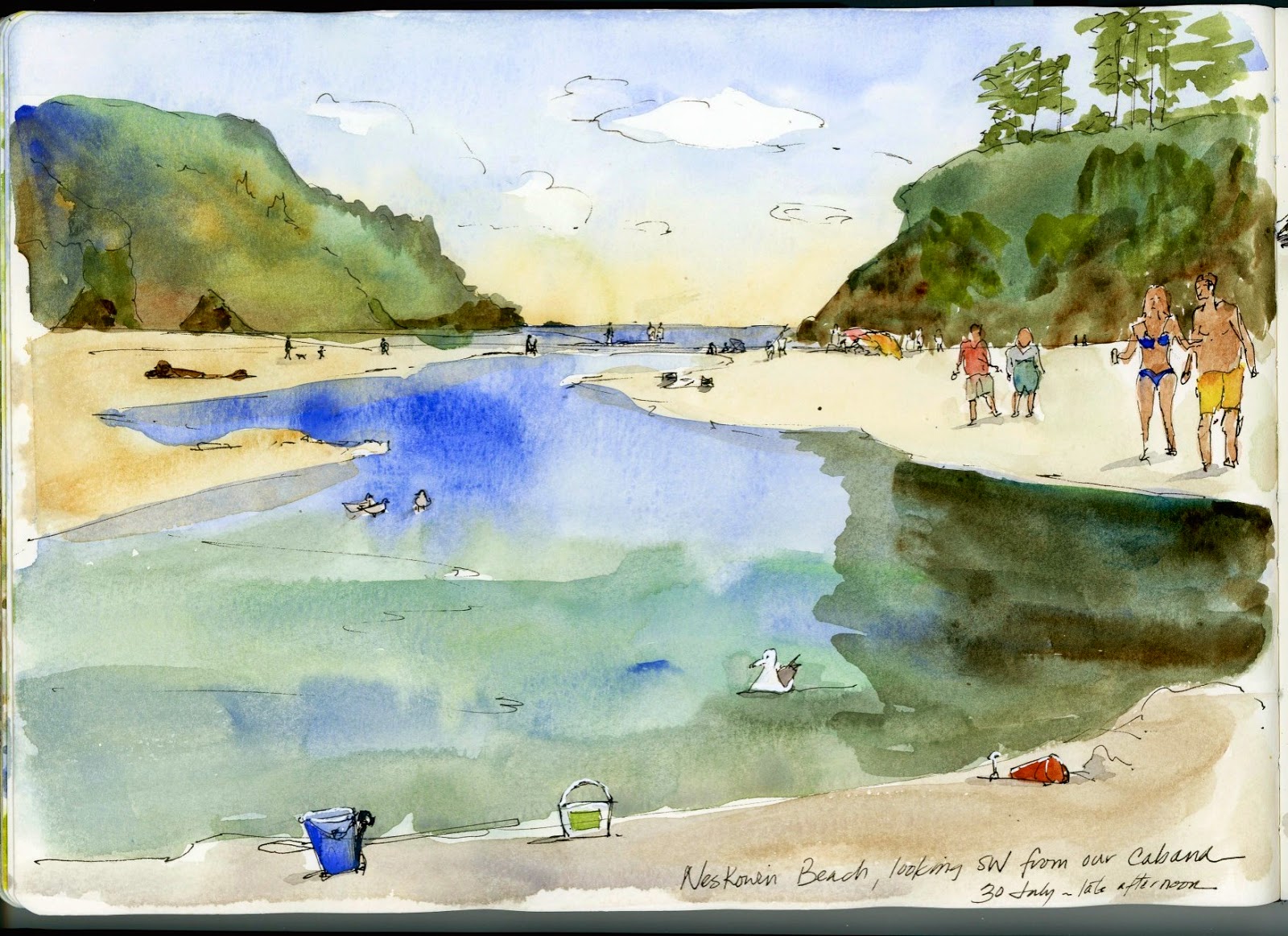 Email ThisBlogThis!Share to TwitterShare to FacebookShare to Pinterest
Sketchy Friends
this is a heads up ( may have posted this twice due to operator ignorance) that Aaron Bros now have all their sketchbooks on sale for 40% off.  They carry Stillman & Birn and Strathmore Visual Journals.  The Strathmore have 140 lb wc paper.  The S&B have a very heavy weight paper that I've tested and is lovely to work with.
I just stocked up with both.  I recommend the S&B Beta Series (white) or the Delta (ivory paper).  I don't recommend the light paper for wc, but would be just fine for ink pen, pencil, or the lightest wash.
Have not tested the Strathmore Visual Journal yet, but it comes recommended by several sources.
Posted by Mike Porter at 4:29 PM No comments:

I had a lot of fun sketching in Cathedral Park this month. When we passed around sketchbooks, I realized that I had fussed over my drawings and they didn't have much vitality  (except for the last one that I was rushing to do in the last ten minutes before lunch). 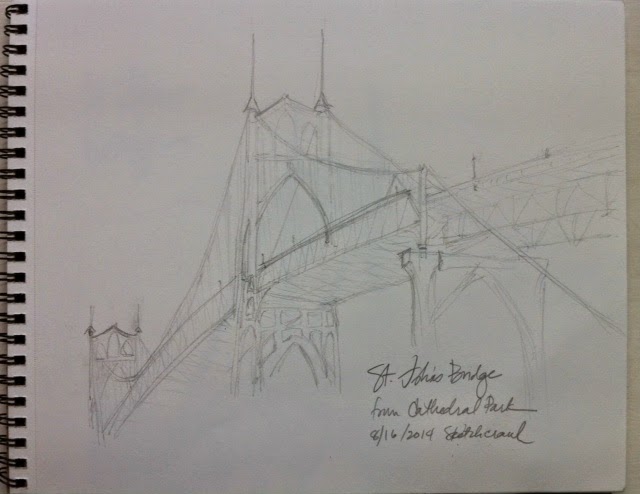 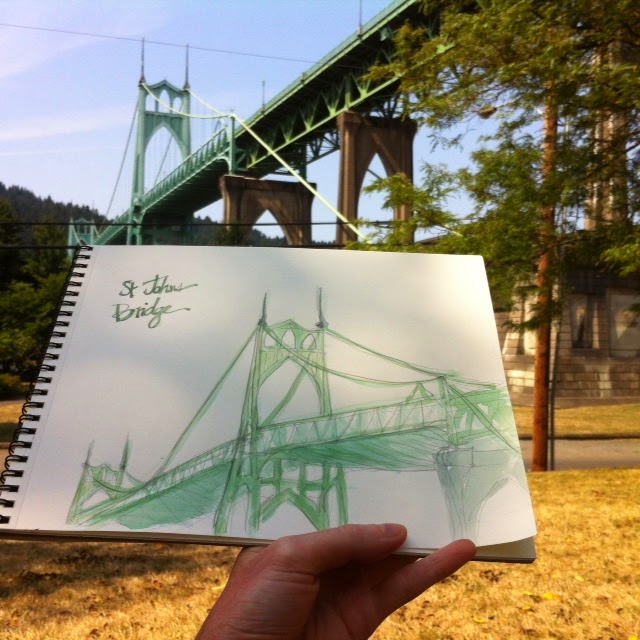 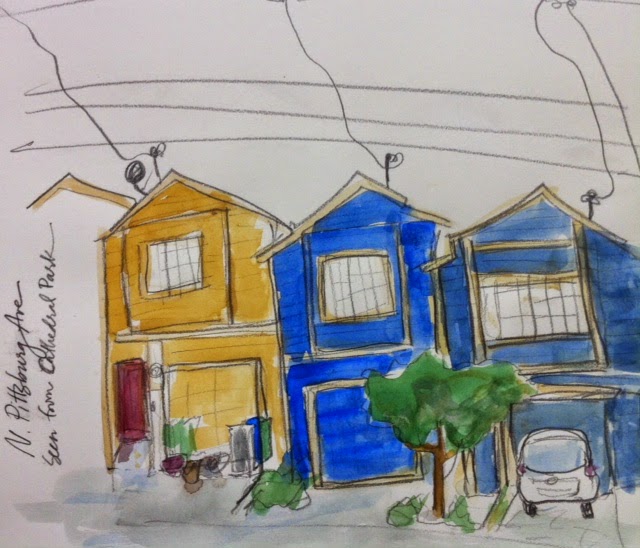 So, when I was hiking in Jefferson Park Wilderness this week,  I tried especially to be loose and not try to get all the details right. I was really happy with the way these turned out, and before sketching with all of you, I never would have attempted either of these views. Thank you for all the inspiration! 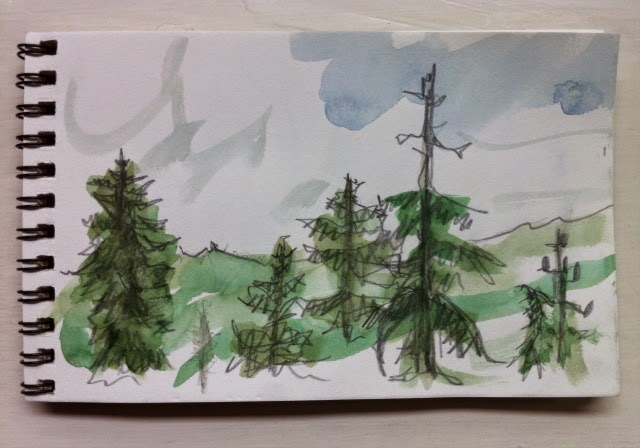 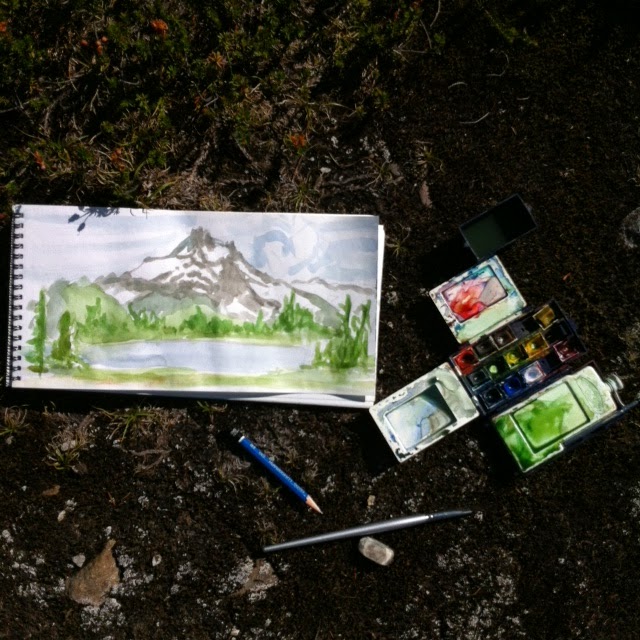 I have a few more sketches from the Mt Jefferson trip on my blog.
Posted by Meadow at 1:55 PM 1 comment: 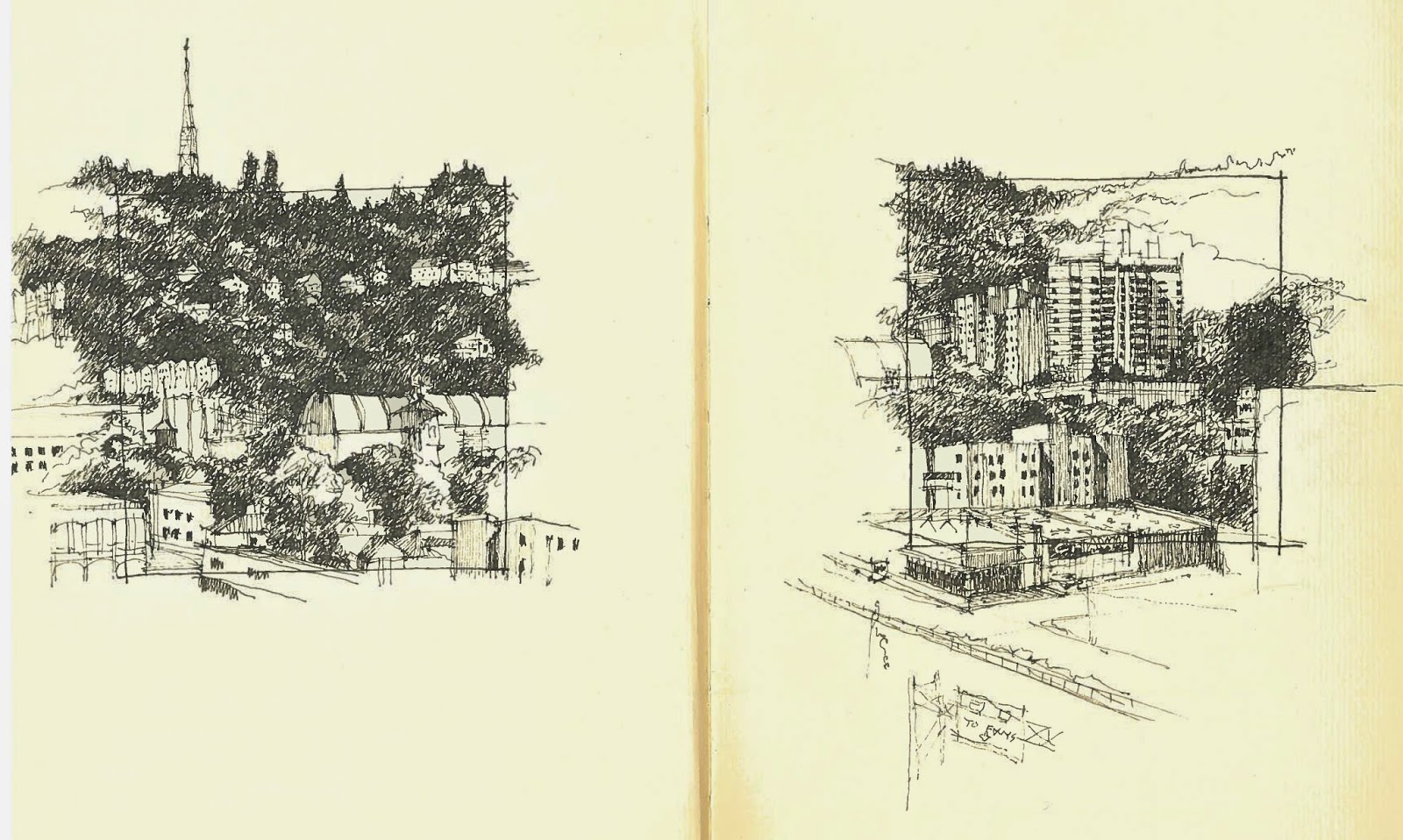 Here are six more sketches from the series looking south to south west.
Posted by Gregg at 8:09 AM 1 comment:

When I moved to Portland in 1991 I lived in the Pearl District at the Irvington Street Lofts.  Being new in the city, in the evenings I sketched to fill my free time.  That first summer I did a series of 34 sketches from the roof deck of the Irvington Street Lofts creating a 360 panorama.  In 1991 the Pearl was still very much an industrial neighborhood.  The Portland Bolt Company occupied the building were 24 Hour Fitness is located now.  As you walked by you could watch the workmen pour molten steel into the molds.  The block where REI is located was a galvanizing plant with the air filled with dust and chemicals.  The series begins looking south east towards the US Bank Building (the pink skyscraper) and continues clockwise.  I think the sketches record a unique time in Portland's history.  Over the next several days I will post the rest of the sketches, I hope you enjoy this look at Portland 23 years ago.
Posted by Gregg at 12:17 PM 1 comment:

I missed the last time the urban sketchers visited the St Johns Bridge and was very determined not to do so again. This bridge is one of the prides of Portland with its graceful arches and because you can actually access it from below you can also see the wonderful structure...again with those beautiful arches.

My intention this time out was to select a view and do that same view in several sketches. I hoped to learn something in each one. I can't say that I consider this as successful though....it seemed that I repeated the same problems of proportion in each one.
As with other Portland bridges I discovered that the structure is complicated, sometimes confusing and very challenging! 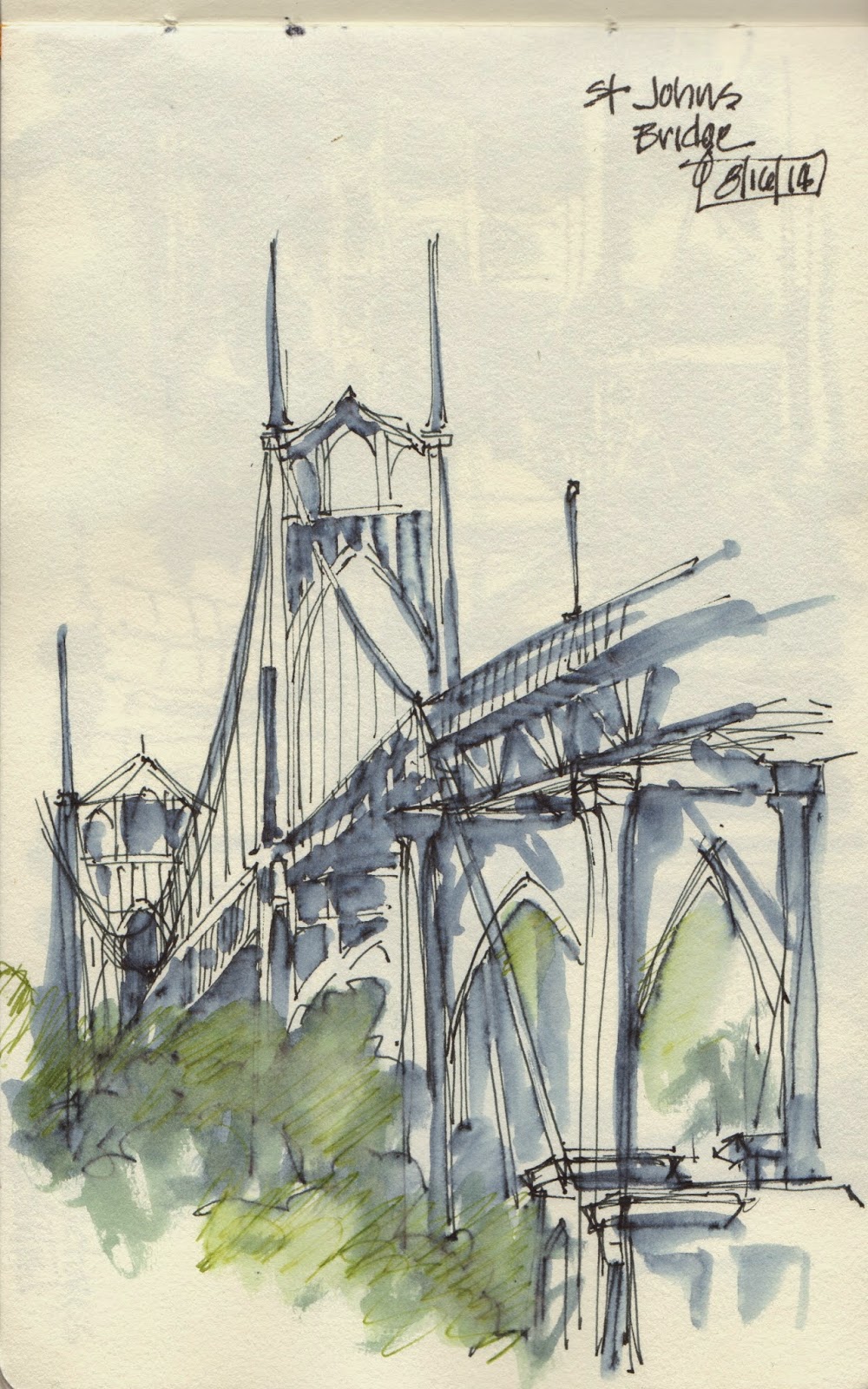 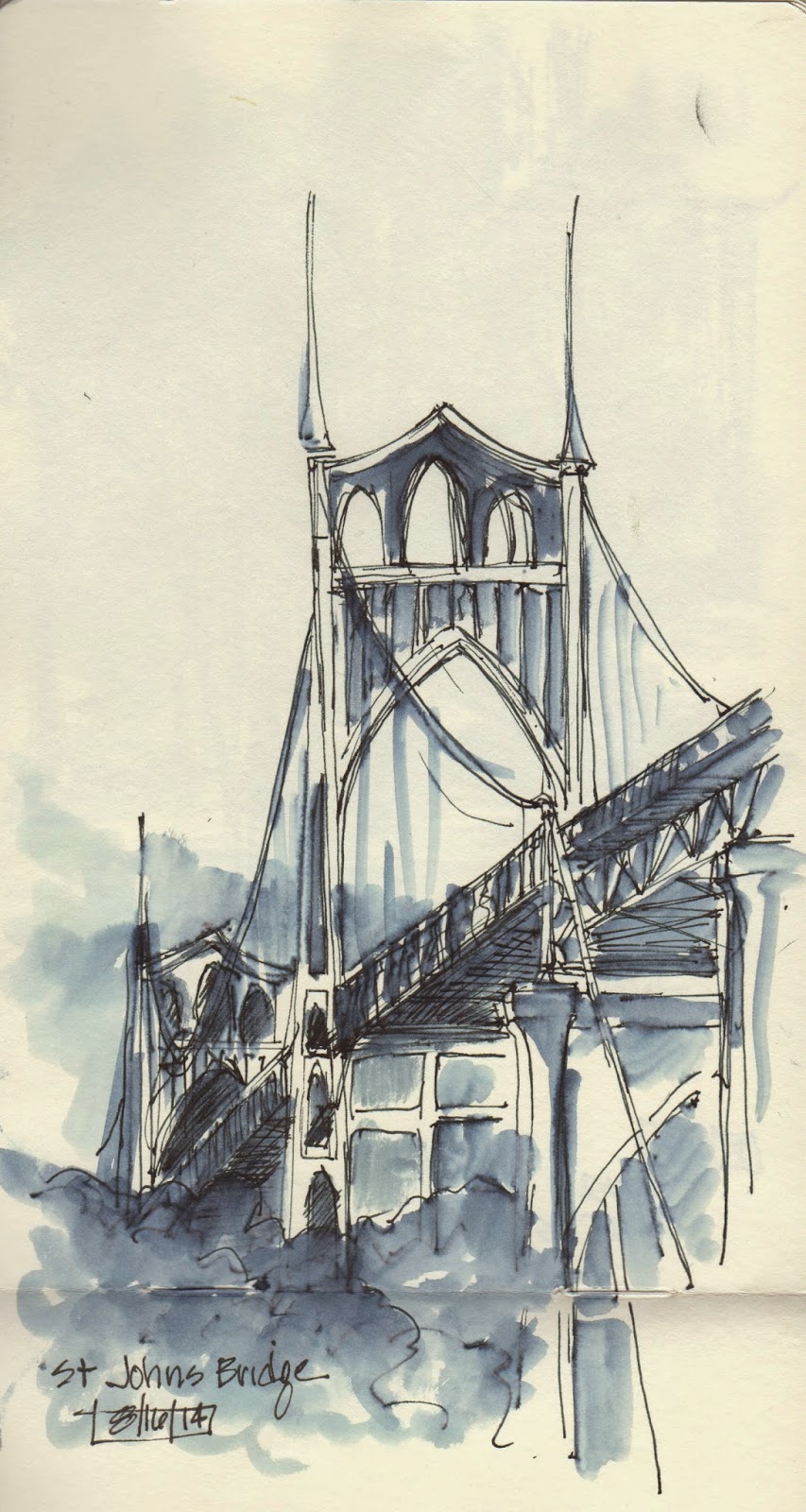 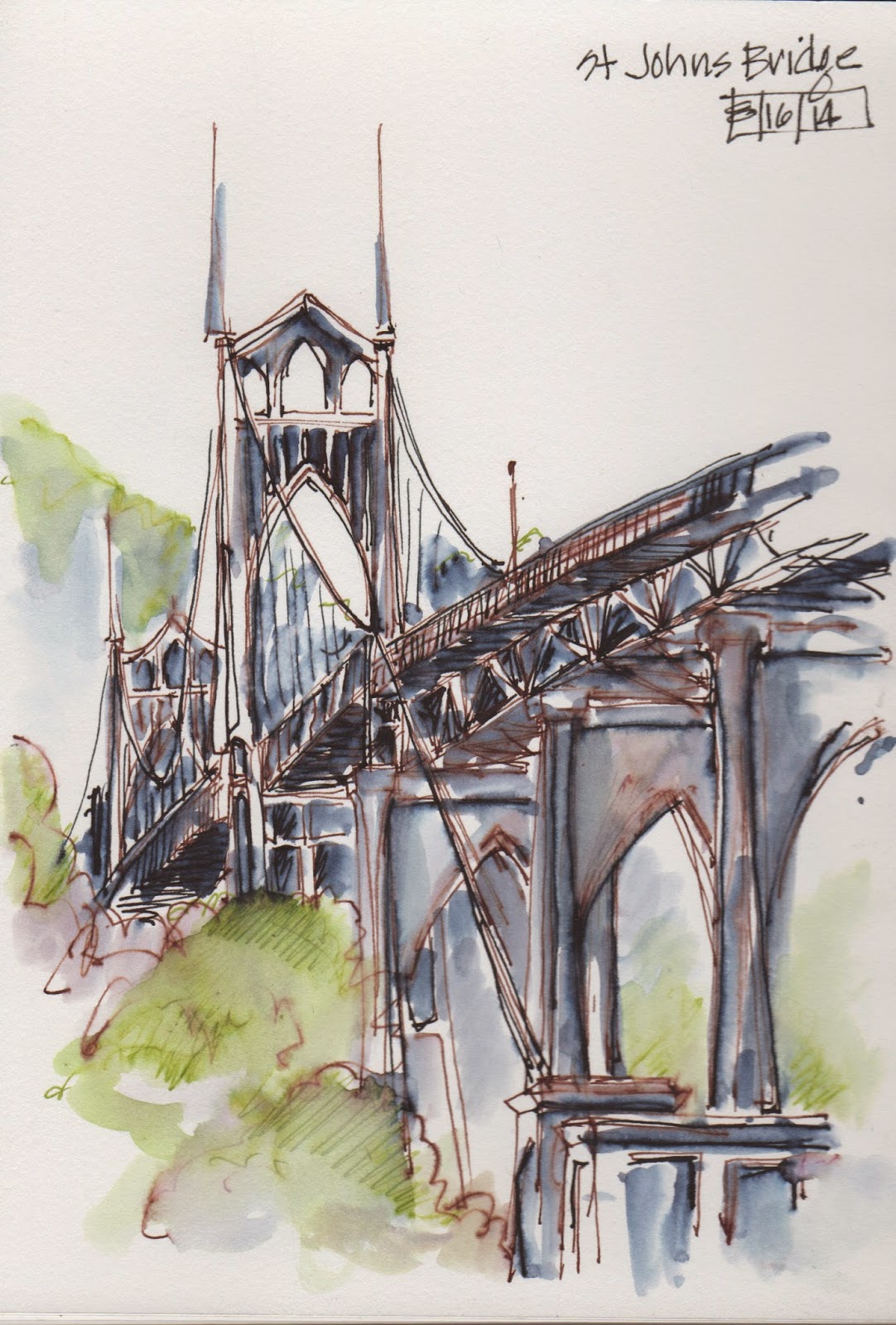 After these above sketches I thought I would concentrate on a little smaller area because truthfully at this time, I was pretty overwhelmed.....! 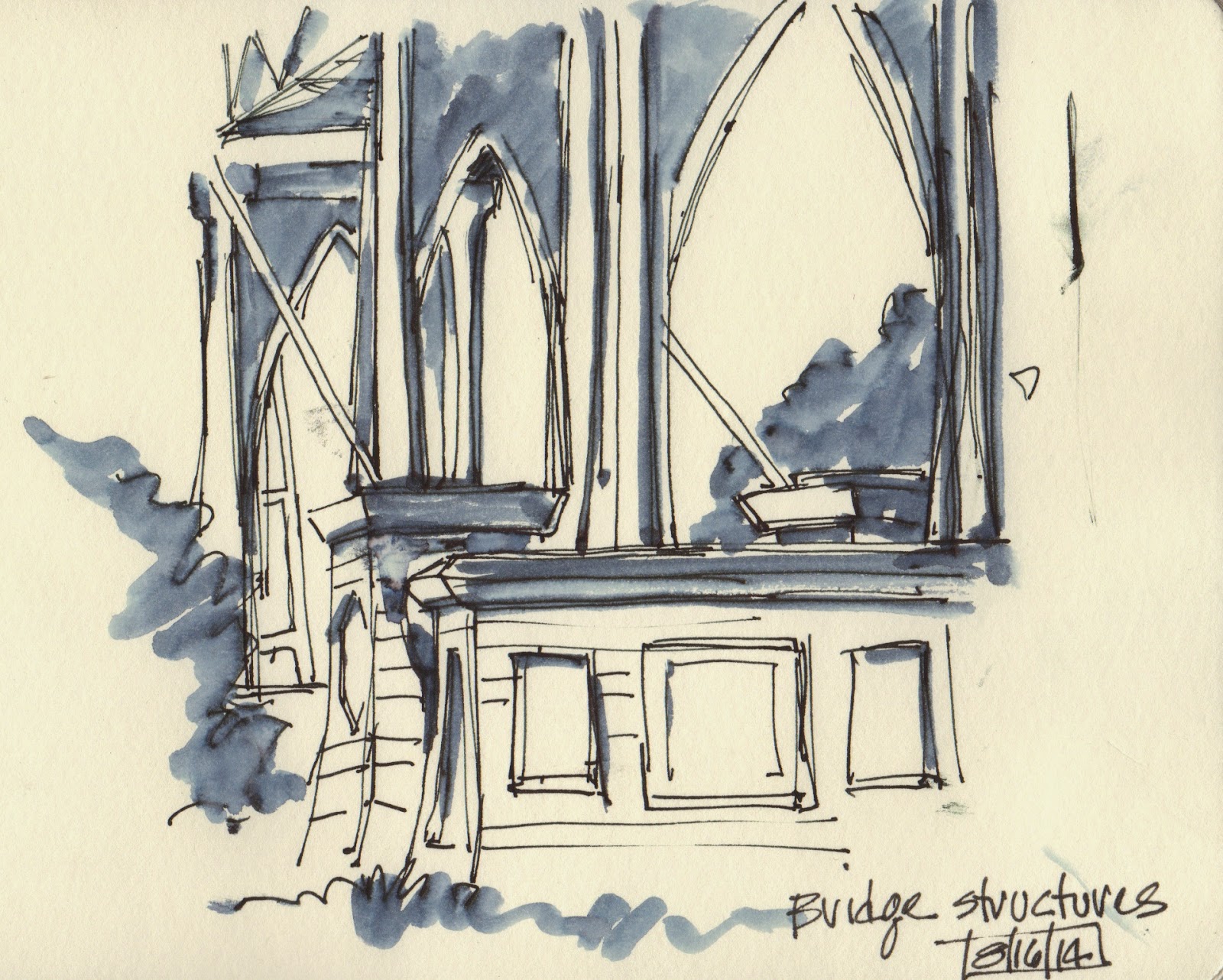 It's me again, this time doing something different with some inspiration from other Urban Sketchers:  I used tips from Inma Serrano's workshop at the Barcelona symposium. She had us draw buildings by starting with paint first. I thought about Inma's gorgeous monster buildings and  didn't care if mine were accurate or not. Instead, I tried to get the feel of the scene. I took Gail Wong's suggestion of using a bigger brush  (in this case a flat one) for a looser look.  After painting, I added the ink and some of the details. 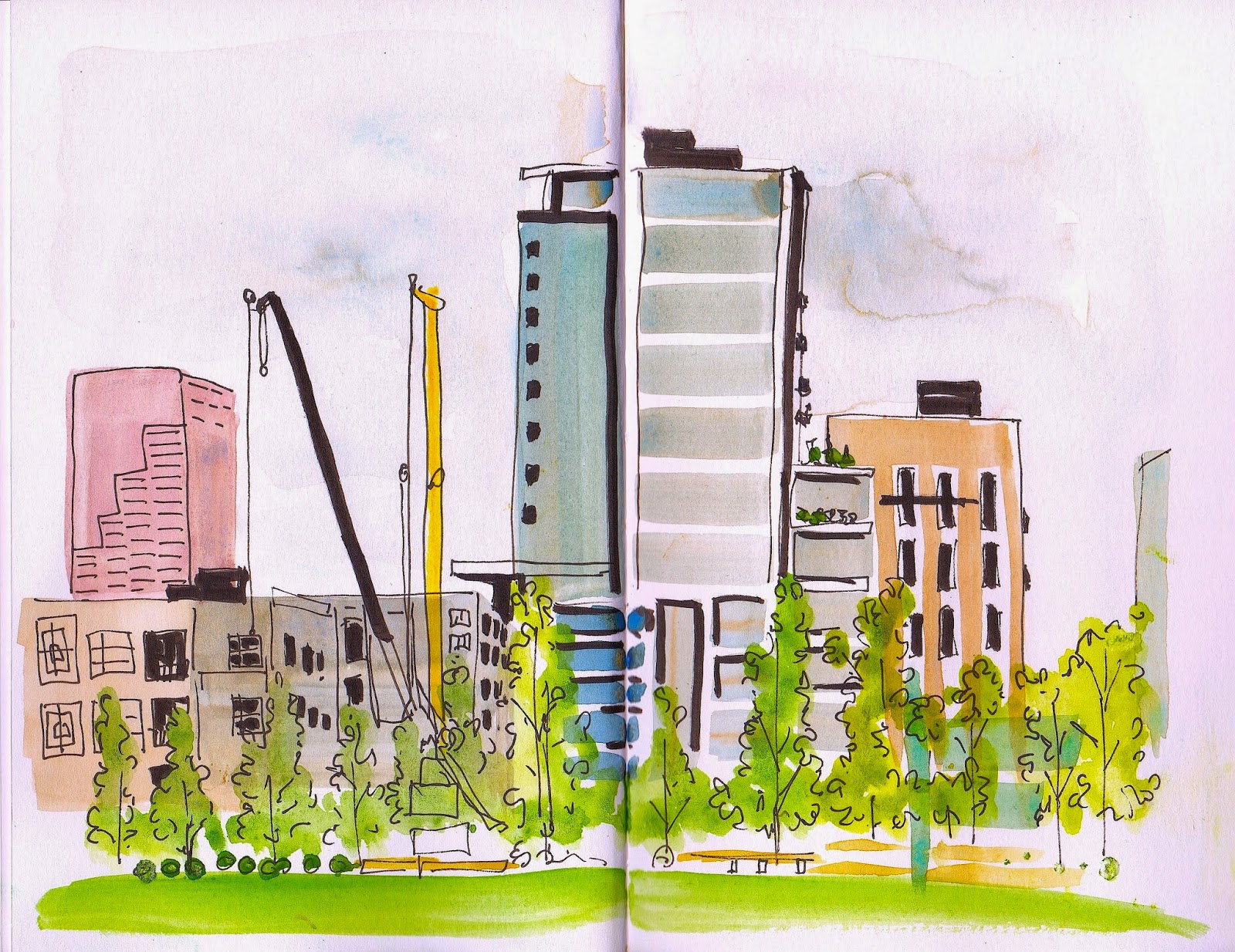 It was a lot of fun sketching like this. I wasn't concerned with how many windows there were or how precise the balconies looked---or anything else. I wasn't really thinking very much at all, just  adding paint and then lines. It was very refreshing and I think I'll try some more of these. They may help me get over my summer slump:)

Portlanders, if you're in the mood for drawing construction, I'd suggest you head for The Fields. There are at least three blocks filled with cranes, drills,  rebar and more. You may want to take ear plugs. Happy sketching!

I thought I'd post a couple of recent sketches from downtown Portland.

These were done from the patio of the Oregon Historical Society. The top one shows the Tom Hardy sculpture, 'Flying Together' and the next shows a north view, looking toward the side of the First Congregational Church. The crane in the background is near Directors Square. It seems almost everywhere I look downtown I see that crane. 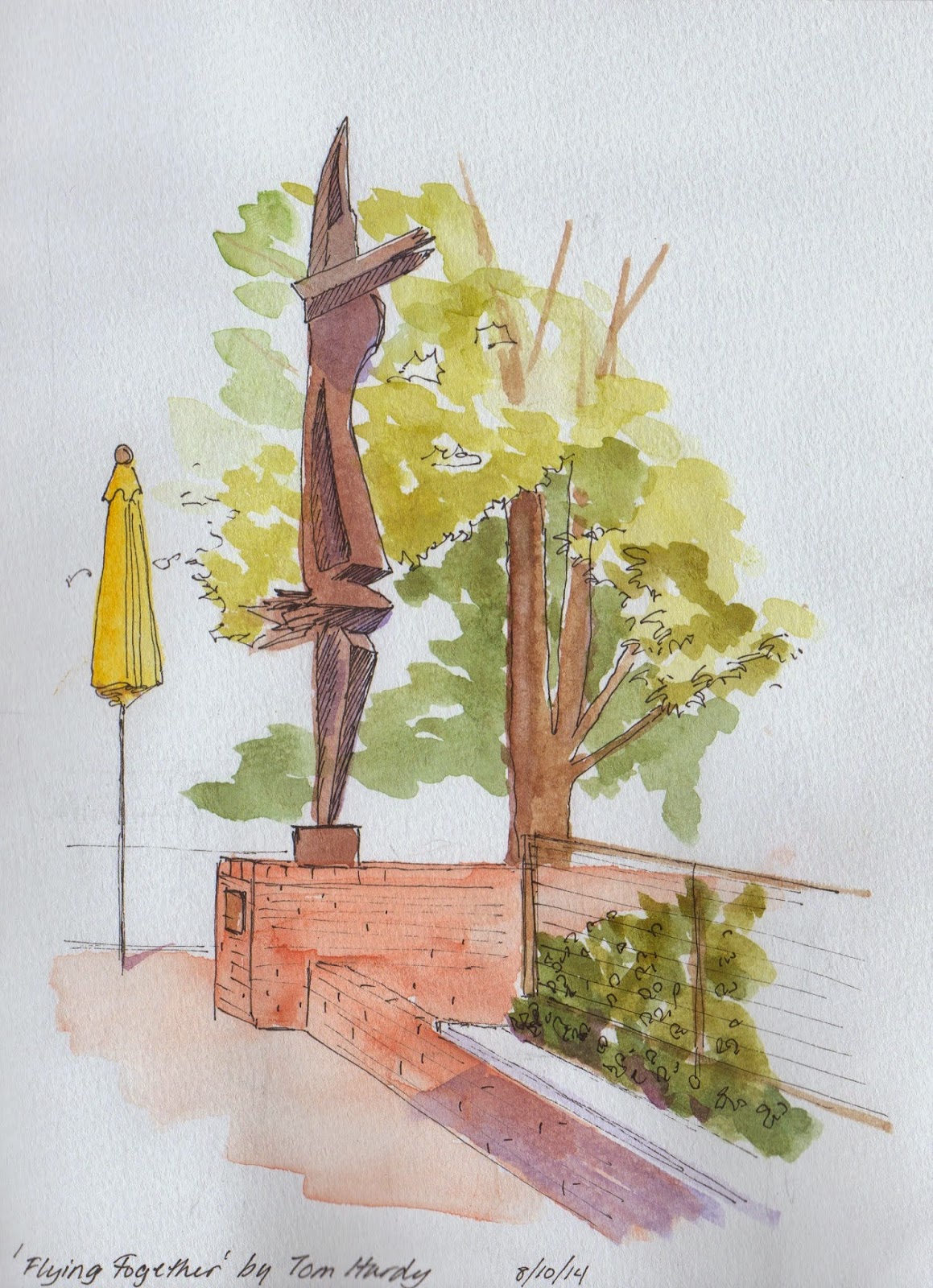 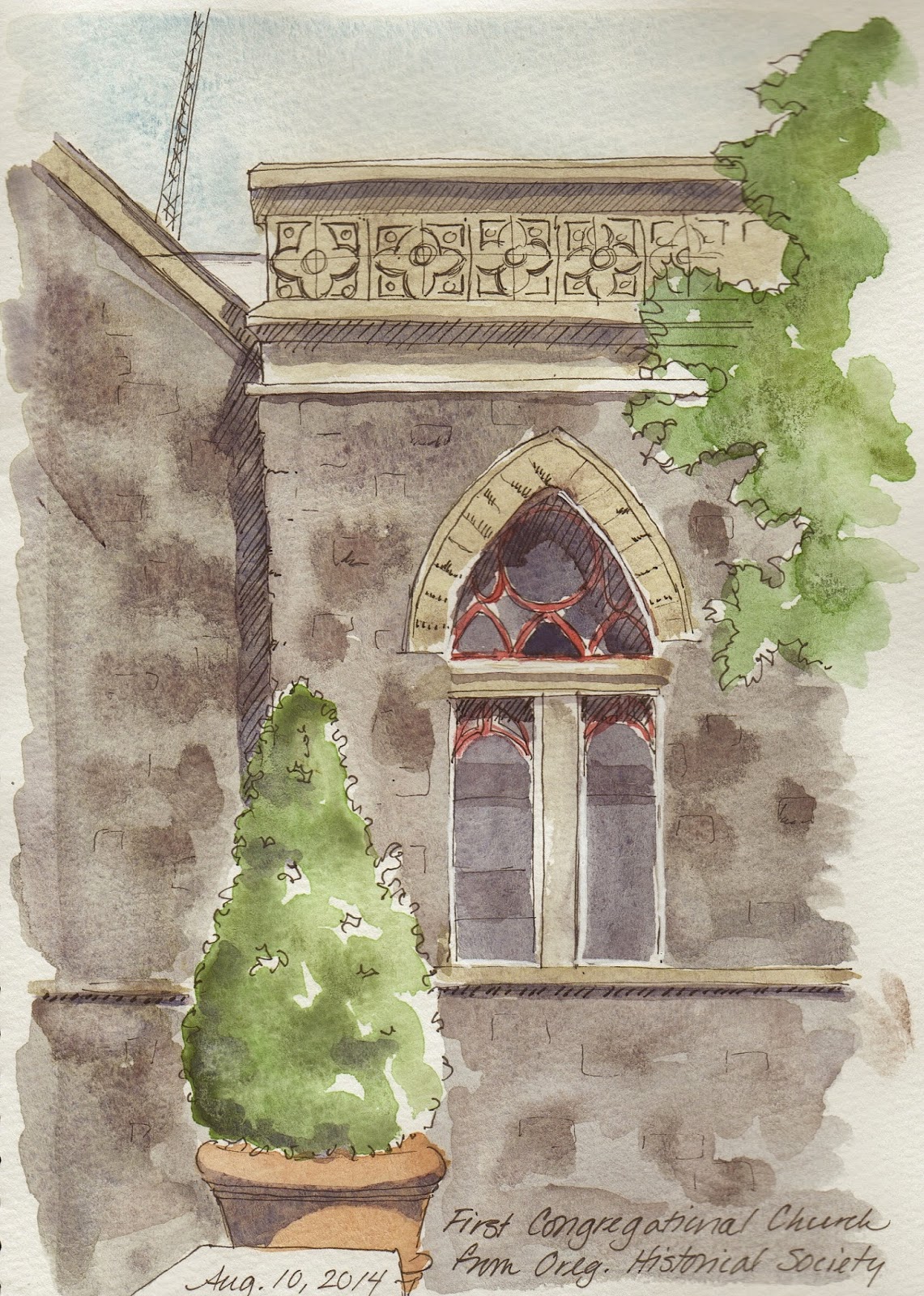 I received a message from workshop co-ordinator Mike Musto about an upcoming WC workshop at (oregonsocietyofartists.com ) OSA .   The dwarfed message below......

There's going to be an event in September at the OSA that might be of
interest to Portland urban sketchers:
Tom Hoffmann, artist and author, will be conducting a three day workshop
called "Cityscapes in Watercolor" September 19–21. Weather permitting, Tom
will spend some time "en plein air" painting around the OSA building- lots
of lovely architecture nearby.

His website is.  ( hoffmannwatercolors.com)
Posted by Unknown at 2:55 PM No comments: 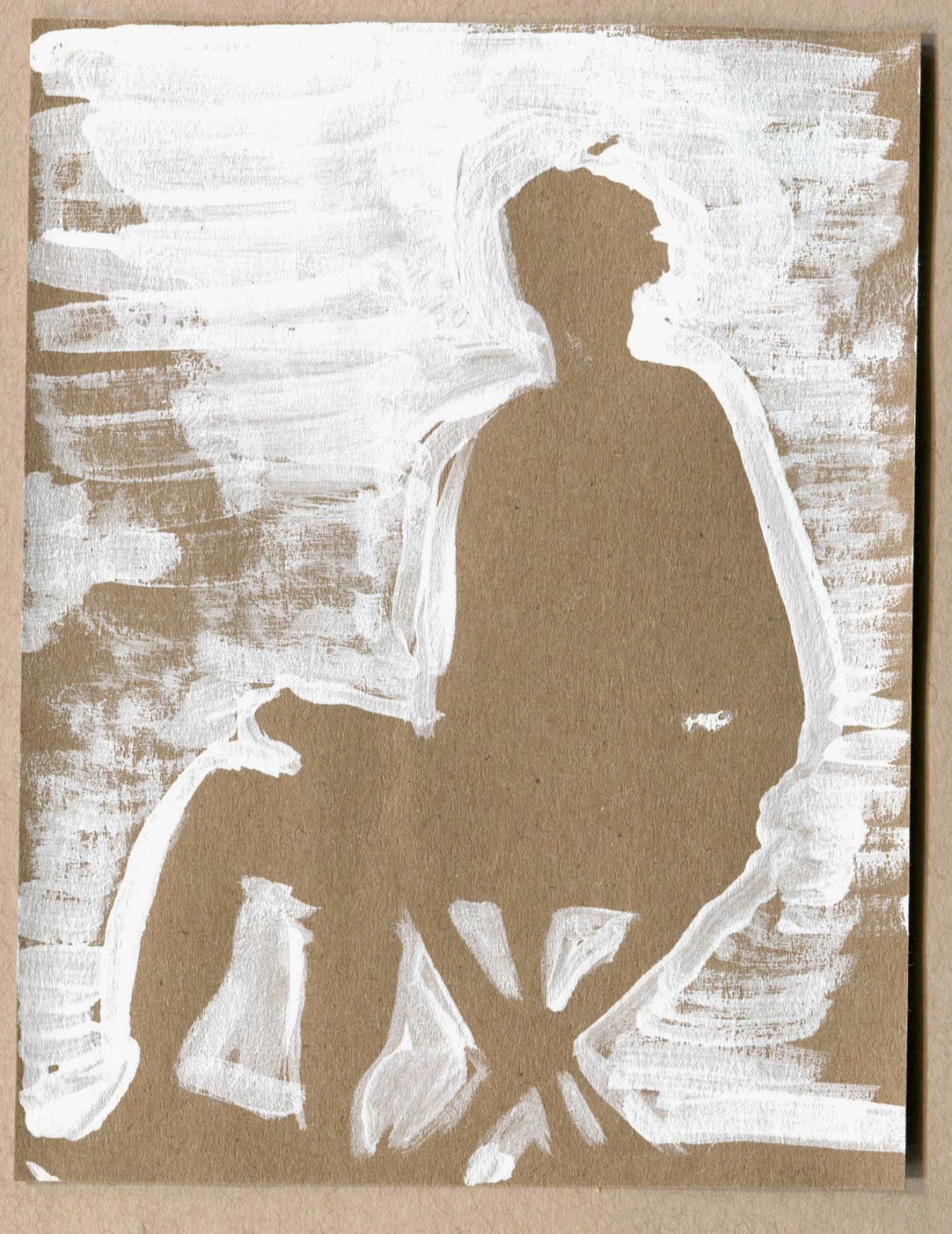 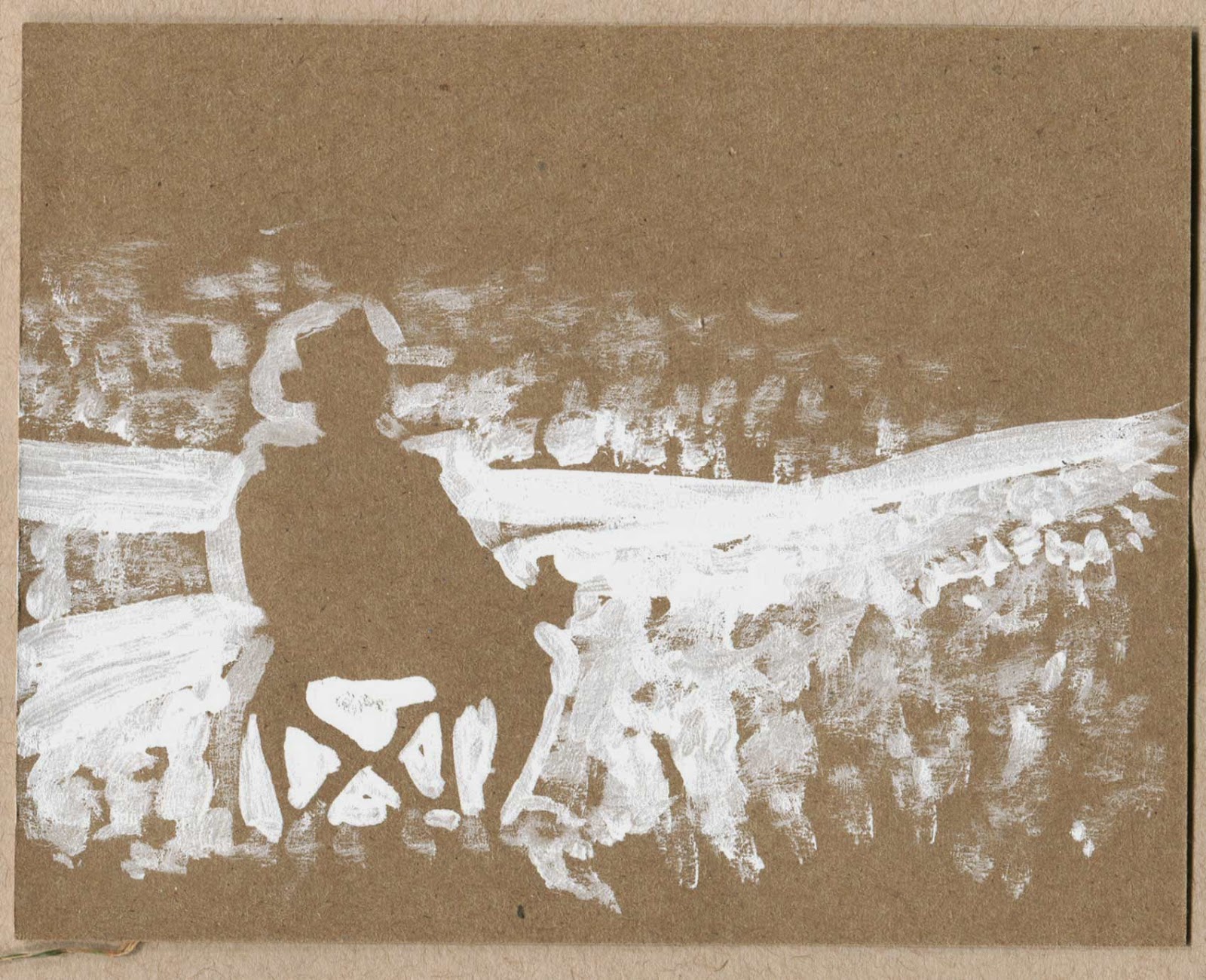 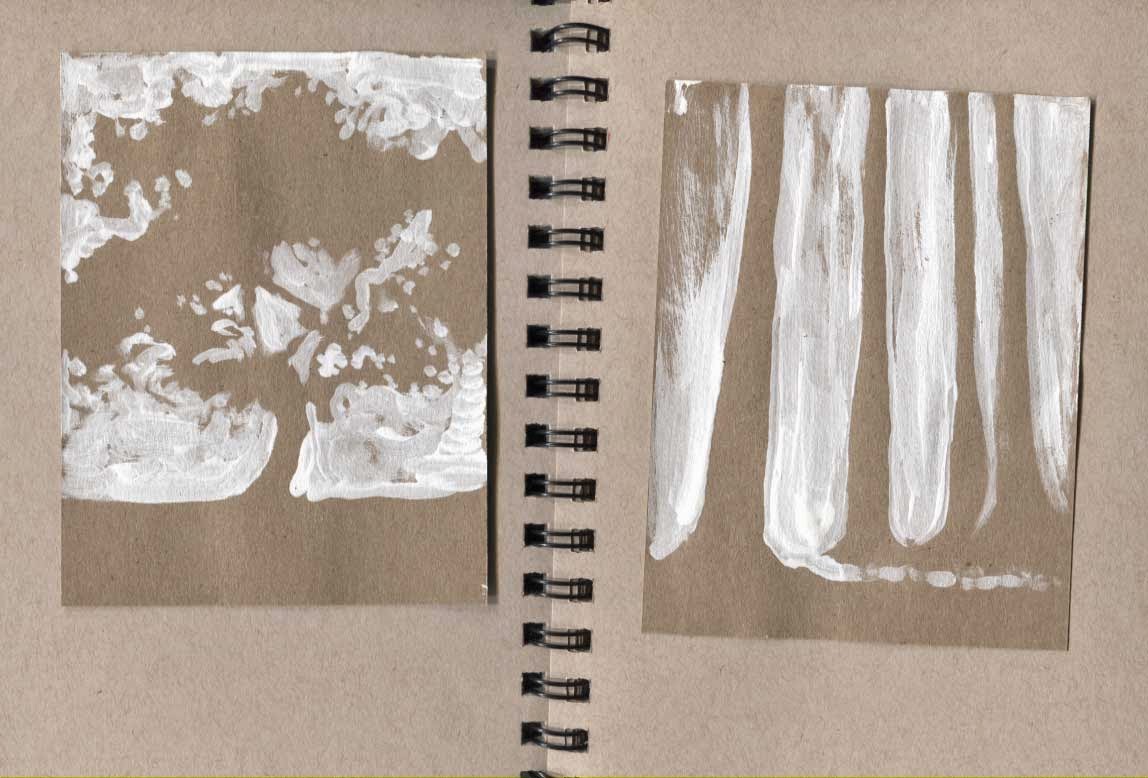 I feel like I was a little hit and miss about getting a good balance of light and dark in this technique of white paint on brown paper. The ones that were fun but a little more erratic in the balance are over at katura-art.com, if you'd like to see more.