I'd gone to Seattle for a concert, and delayed my return so that I could also attend a sketchcrawl there, at the downtown library.  While most people stayed inside the library to sketch either the interior or the views of the city through those diamond-shaped windows, I retreated to a coffee shop across the street, and worked on the view outside the window, tackling the strange perspective of the exterior of the library. 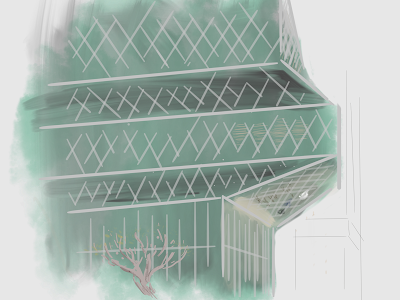 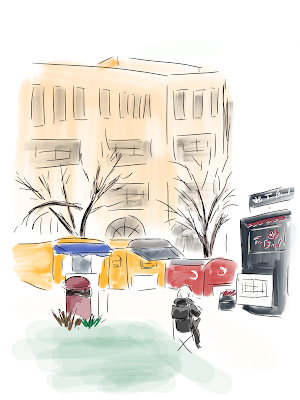 I found a dry place to sit in the center of the court and did a sketch of the carts in the opposite corner, with the city hall looming behind them.


By the time I'd finished that I was chilled, so I retreated to a heated porch, sitting behind a line of sketchers perched on bar stools. 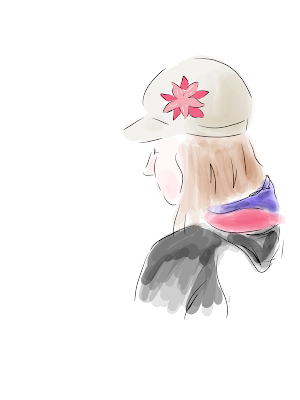 And one bonus sketch, of one of the stuffed animals in the Christmas display at Union Station.
  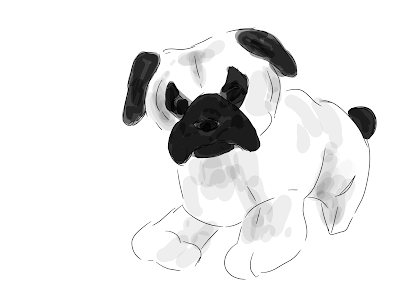 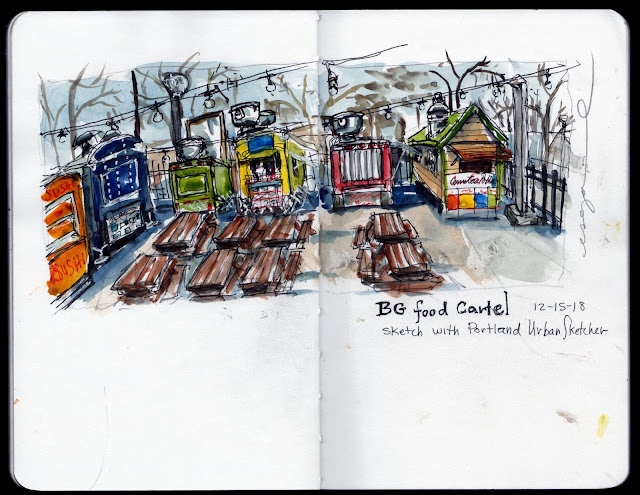 Another fun day with the Portland Urban Sketchers!   Ellie

Happy to see everyone at the BG Food Cartel in Beaverton. 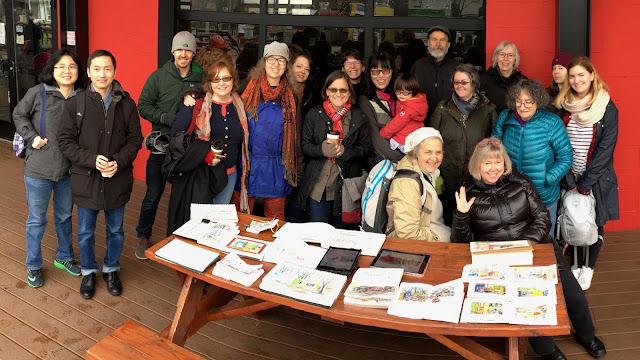 I tried the "direct to watercolor" approach that I keep hearing about. 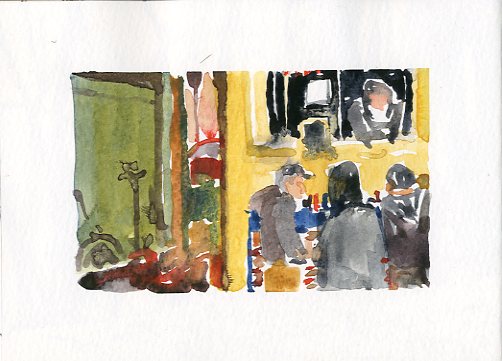 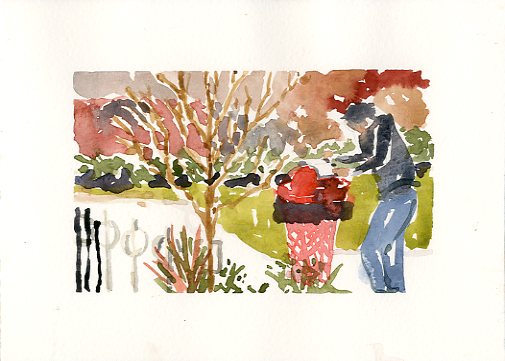 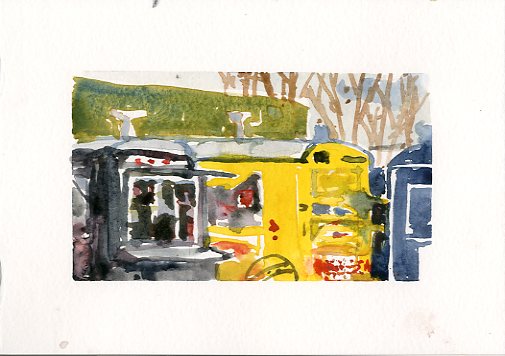 Posted by Kay French at 5:34 PM No comments:

BG Food Cartel today ... and some other recent sketches

Today we had a nice turnout again - it was nice that there was no rain - and the cold did not deter us!

Lovely to see you all - new and familiar faces alike. 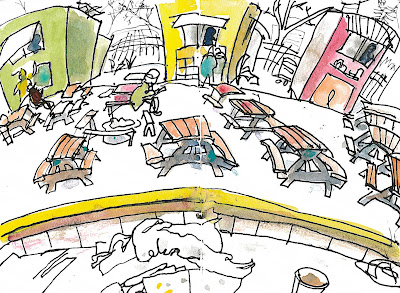 This sketch is from last month's crawl at the Portland Nursery.  I enjoyed capturing Paula and trying out some warped perspective.  Cozy and warm inside the greenhouse. 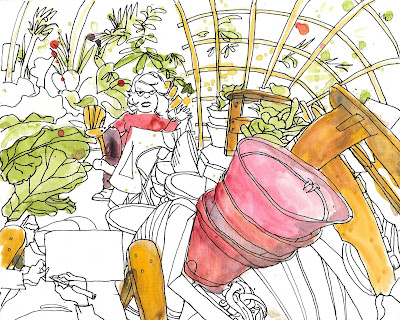 This sketch is from the 10x10 class taught by Rita at the Chinese Garden. 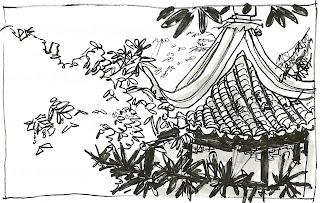 This was at the Annie Amie Vinyard - our office had a winery tour for a holiday party. 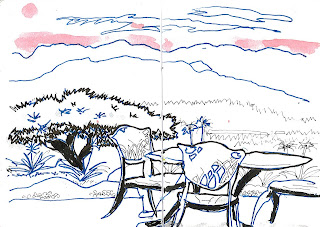 And here are some recent bus sketches from my new commute on the #35 bus. 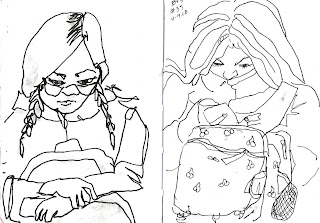 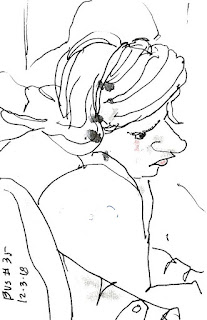 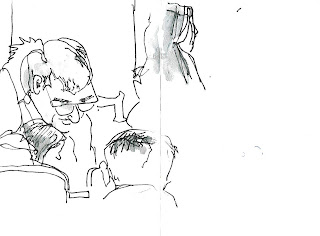 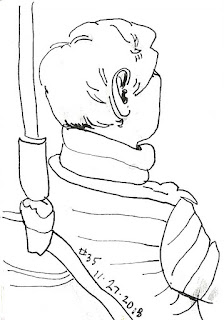 Posted by Andrea at 2:35 PM No comments:

On this past cold and windy day in Portland I decided to visit the Oregon Historical Society. I had heard that there was a display of SantaLand items and thought that might be interesting.

Now, I am immigrant from the east coast, so I was not familiar with what Santaland was. It turns out that for many years the Meier and Frank company had this animated holiday  display...at one time it took up a whole floor of the downtown store. Over the years it was compressed to smaller spaces and eventually disbanded.

The display that I saw was pretty small. A volunteer there said that mostly it was due to the extremely poor condition of most of the items when the historical society took possession of them.
What I saw was the Santa chair, Rudolf, tree, wreath, and three elves. The sort of train thing behind the elves is supposed to be a model of a monorail that had been part of the original Meier and Frank display. 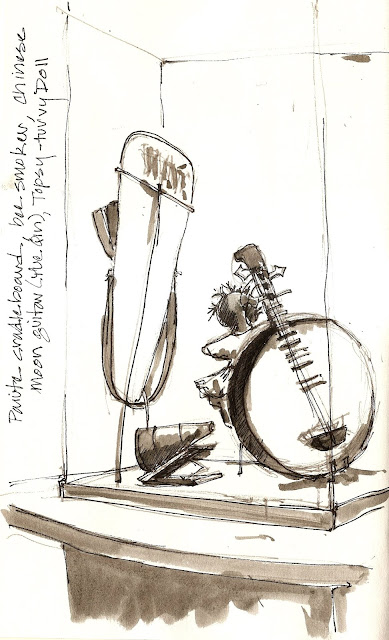 And just to round out this report of my sketching day is my beginning sketch done from the Behind the Museum Cafe....a view out the window. 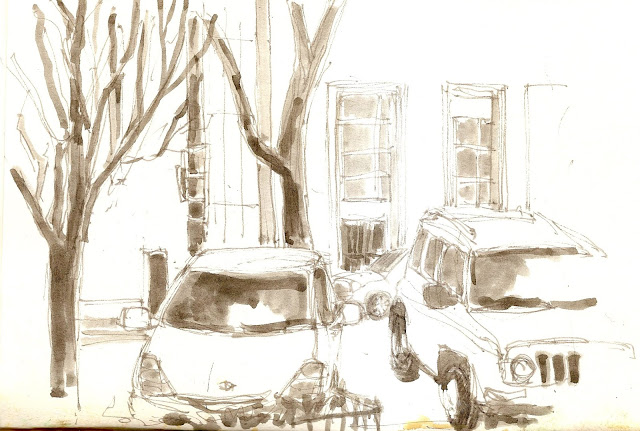 I made it for a bit of the day this year.  I had a prior commitment in the afternoon, so I had to go in the morning, just after they'd opened and could only stay an hour.

I started out by sketching some of the stationary trains, not being quick enough to do the ones running around the tracks. 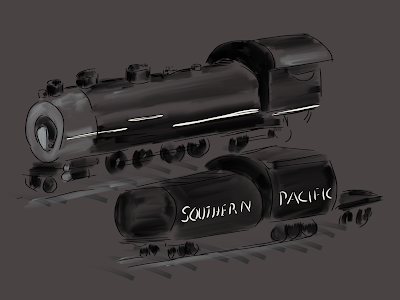 By the time I was finished with that more families had arrived, so I did one quick sketch of a couple of kids playing with wooden toy trains. 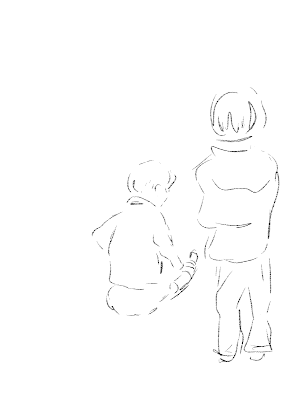