Sketch with us in Sellwood!

Our 3rd Saturday Sketchcrawl is February 18 in Sellwood!

We'll meet here, at Tea Chai Te, located in the sketchworthy Red caboose, at 10 am:

If the weather is great, we'll sketch around on the streets of Se 13th Ave in Sellwwod:

and of course, the red caboose!

If the weather is not so good, there is always the antique stores and coffee shops to hunker down in.
We can find a place to gather at about 12:30, possibly at Jade Teahouse (If they aren't too busy)

We're also a short car ride to Oaks Park, which could be fun to draw if the weather permits!

Check out this  Flickr set of Sellwood Neighborhood to get you excited for our next sketchcrawl locale!
Posted by Alanna Beckwith at 12:24 PM No comments:

I didn't get much sketched at the SketchCrawl last Saturday and I wasn't pleased with most of what I did, but I really like to see other people's sketches, so I thought I better post a few myself. Here are some quick sketches of a few of the other sketchers. There are a few double exposures; Mary really didn't have a feather in her hat. 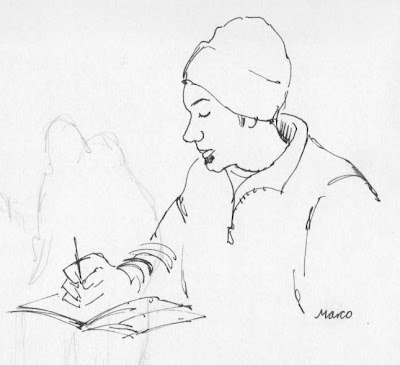 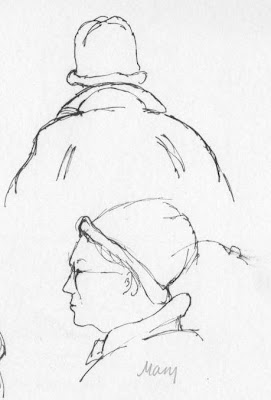 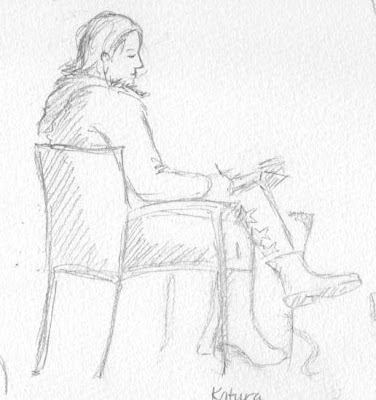 Even when the sketches aren't very satisfying, it's always fun to go out with the group and see what others are drawing.
Posted by Vicky at 3:40 PM 2 comments:

It had been a while since I'd been out with the crew, and it was nice to join up with the group this past Saturday. It was a fairly good turn out and it was great to check out what everyone's been sketching. I could look at everyone's sketchbooks for hours. Spent the morning dodging rain, and sketching inside Starbucks and around the World Trade Center. Finished the afternoon up with lunch at Seattle's Best while we tried diligently to capture a likeness of the Portlandia statue. I sketched out a version in pencil while my other sketches from the day are done using a Pentel Brush Pen and assorted Pitt Pens.


Posted by evensketchier at 1:23 PM 2 comments: 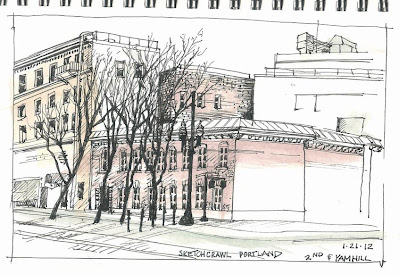 Had a great time at the Portland sketchcrawl on Saturday...where a dozen of us roamed between second avenue and fifth darting raindrops and marveling at the sporadic sunshine of a very unpredictable day. I managed a few ink sketches which I splashed with some watercolor once I got home. I also took a few photos to sketch from at a later date. 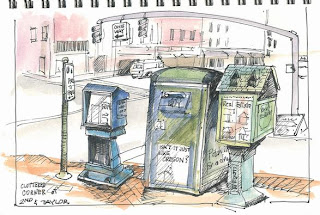 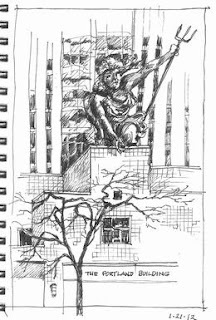 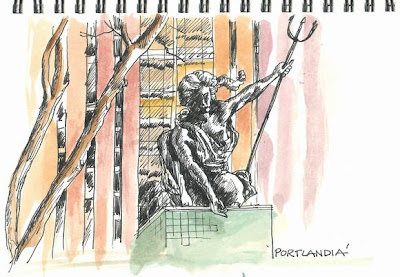 It was hard to get the right amount of muscle to her figure...she really is an amazon woman...and is also in an unusual crouching position!
( just draw the darks.....!) 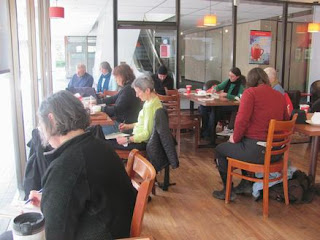 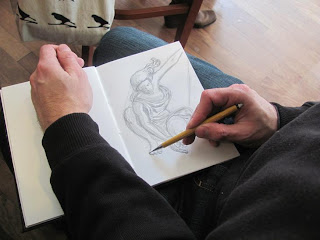 Portland Urban Sketchers met downtown at SW 2nd and SW Taylor at a Starbucks. Downtown on a Saturday morning is a quiet place-- great for focusing on urban landscape without the distraction of traffic and pedestrians.

Twelve sketchers showed up on this cold, damp day. The sun kept teasing us, but the rain still fell.

I did some warm up drawings of my fellow sketchers & pasted in a map of the area,

we did venture outside, under a sheltered area that also had tables. I managed to mostly avoid drawing buildings. I just wasn't feeling in the mood to work on perspective. In the background, you can see something with the letter E on it. Electric cars can park in two parking spots for as long as they want, as long as they are charging up their vehicles.

I attempted to figure out the lines of a bicycle locked to a bike rack. Not only is a bike difficult to draw, but the bike rack it self, had odd curved metal that confused my eye and my pen.

Huddled back in the warmth of the cafe, I couldn't resist trying to draw this mural on the side of a building.

Our next stop was supposed to be Steamer's for lunch, but since it was closed, we went to Seattle's Best. We had lunch there and tried to sketch the Portlandia statue from the window. I couldn't get a good view without taking over someone else's chair, so I decided I'd draw the sketchers sketching the Portlandia statue. You can see below, on Kalina's sketchbook the trident that Portlandia is holding.

One of these days, I will attempt to draw the Portlandia statue.

We shared our sketchbooks and then parted ways.

A fun day for a sketchcrawl--veering back and forth between cold and rainy, then suddenly sunny and blue skies, and then rain again. We were making good use of coffee shops, overhangs, and whatnot to keep sketching in the unpredictable climate conditions.

Today I decided that my little warm brown Micron pen was good for bricks. And I let my brain play with drawing just enough to give the impression of brick-ness, without driving myself crazy doing every brick. Fun challenge. 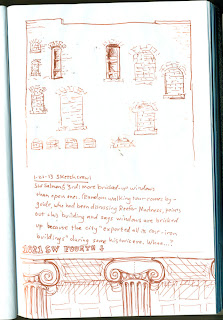 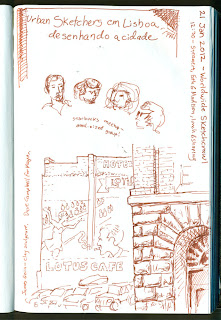 Similar challenge when drawing twigs and branches--how much detail is enough to suggest the scene, without going batty tracking every last nuance of the fractal pattern? 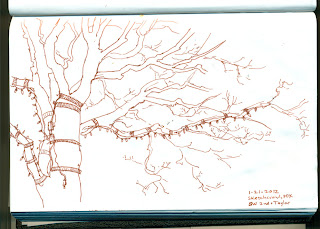 As I wandered from the starting cafe towards the ending cafe, I got caught up in the carving on a historic fountain. Fascinating trying to suss out how the stone carver created each letter and number, and also surprising to see how the light and dark of each incision were not where I would have expected them to fall. 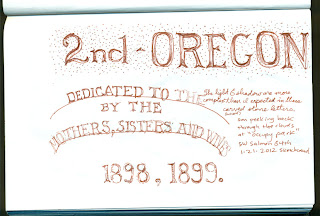 We sketchers met up again at a coffee shop near our fine city's "Portlandia" sculpture, and were able to sit indoors with warm beverages and draw her through the windows. Amazing watching the light on the rain-wet sculpture change as the clouds would part, and then regather again. 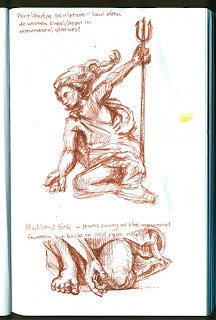 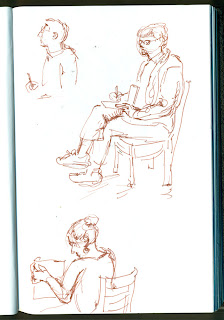 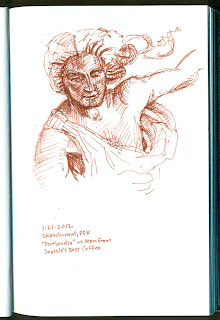 Email ThisBlogThis!Share to TwitterShare to FacebookShare to Pinterest
Labels: Katura

PDXUsk members at my studio

I really enjoyed having my comrades in sketching visit my studio. I took a few of photos. It was more fun than it looks in the pictures 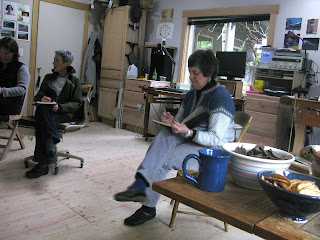 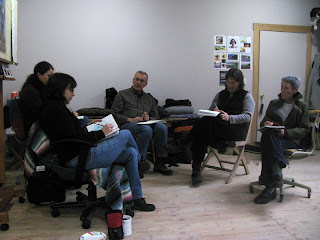 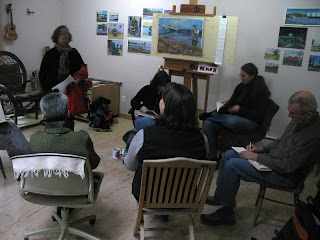 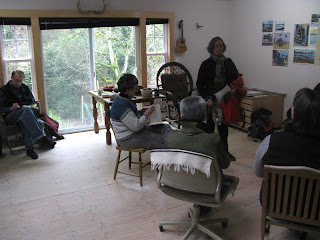 I also did one sketch of Kalina and Alanna 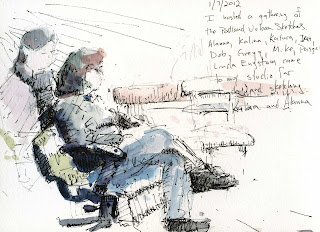 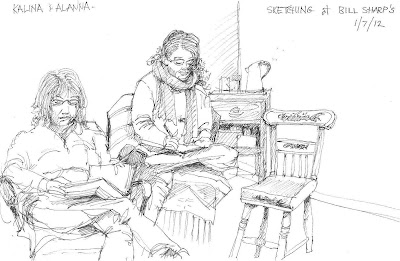 Here's another 'Thank You' to Bill for hosting that Saturday sketching session a few weeks ago in and outside of his studio . Loved the tour, as well as seeing new and old faces! Hope to make a few more of the sketching events this year. I only had time to do one sketch...it's fun sketching each other.( ever since Lisbon, I am trying to do more people...it is the only way to get better. I also was impressed by all of Bill's wonderful paintings that were tacked up on the walls...he is one prolific artist! ( with a sharing and caring heart!)
Linda  (Engstrom) ﻿
Posted by Linda at 4:34 PM 2 comments: 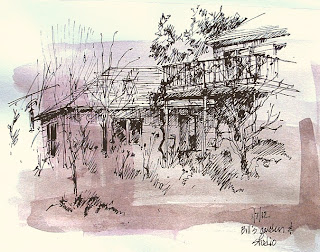 We had a lovely gathering at Bill Sharp's new studio.
The sun was out and although a little on the chilly side I was able to get this one sketch done and then promptly moved back inside to get warm and enjoy the company and food. Great fun! 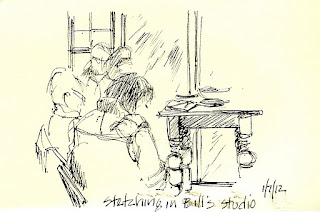 A Gathering of Sketchers

On Saturday, January 7, I loaded my backpack with a hodgepodge of sketching supplies and took the bus and light rail way out west, to the hilly fringes of Portland for a meetup of Urban Sketchers. It was only my second meeting with the group--and my first time meeting folks in daylight--so I was a little giddy with nerves. I figured it would help to draw bus signs and lampposts along the way, to loosen my hands up for the gathering. 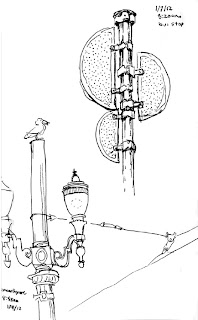 Arriving at Bill Sharp's studio, I found quite a gathering of lovely folks, who promptly fell to discussing paper, pens, paints, the excitement of travel, and the even greater excitement of traveling with a sketchbook in hand. Is it that I don't hang out with artists often enough, or just that I will always get goosebumps when folks start talking about tubes of Payne's Gray watercolor paint going on sale? The nicest part of it all was that we promptly fell to drawing little pictures of each other, quite comfortably and unabashedly. 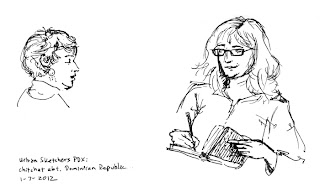 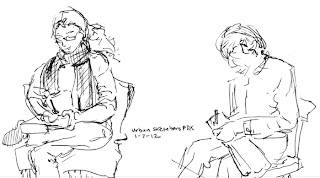 Bill had generously provided drinks and snacks, and the hot tea was very welcome on this chilly (but eventually sunny) day. The group was also very generous about sharing their wide knowledge of the world around them--including identifying the seedpod that I had sketched out in the garden as from a Stewartia tree. (Which I spelled wrong in the sketchbook, of course.) 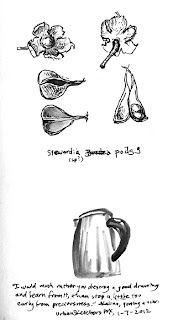 As we all thanked Bill for a lovely afternoon, he offered me a nice parting piece of wisdom about the mental state that he tries to bring to process of art: "I should go to the dentist, I should eat healthy food. But I want to go sketching." An excellent reminder!
Posted by Katura at 9:31 PM 2 comments:

Meet at Starbucks at SW 2nd & Taylor; if raining, sketch SW 2nd from windows or the outdoor sheltered area outside or at the World Trade Center one block away. This area has a lot of nice older buildings and I've always been fond of the view of curving MAX tracks and trees at the Yamhill Max Station. Gather again for lunch at Steamers Asian Bistro at 5th & Madison - it's about 5 blocks away, but they have some very cheap food options and a good window view of Portlandia (the statue)!

Thanks, Kalina, for researching this option! 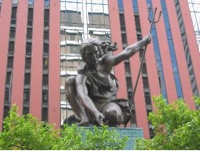 Posted by Alanna Beckwith at 2:41 PM No comments: