We met for the Worldwide Sketchcrawl at the Cafe Under the Bridge and had our youngest ever member (5 years old). 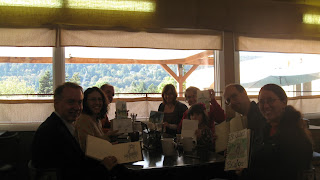 with some great views of the bridge and its proximity to Cathedral park, it was a great place to sketch and the weather was beautiful. 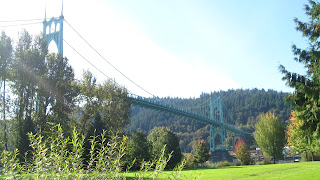 I mostly stayed inside doing some sketches from the window.
Here is a peek into my sketchbooks: 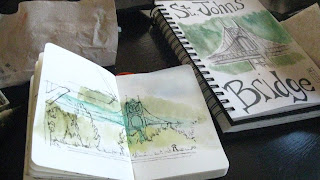 I collected responses for location suggestions for upcoming sketchcrawls and thought I'd share what you all told me. Some of these the group has done before either in the early days (pre-blog) or during the symposium.

In any case, this is a nice list to have for those that are looking for inspiration on where to draw. Please feel free to add items by leaving a comment!

Email ThisBlogThis!Share to TwitterShare to FacebookShare to Pinterest
Labels: Where to sketch in PDX

I am starting to feel right at home sketching at the Skidmore Fountain, as I have ended up there several times with sketching groups this summer. Each time I have a stronger urge to try it again. Also, I never tire of seeing the different interpretations of the area by various sketchers.

This is my most recent attempt. I painted the fountain on the spot, then did the background and the foreground figure in my studio. I rarely finish a sketch in one sitting, but then I enjoy taking my time, so I guess that's okay.
Posted by Janene at 9:31 PM No comments: 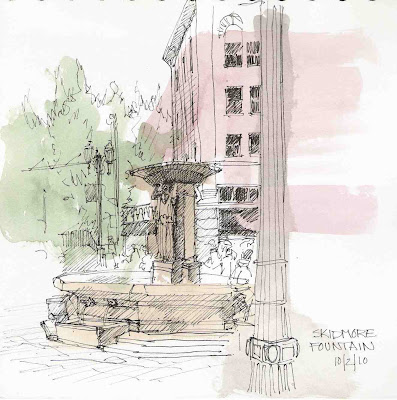 I used Tia's color technique on this drawing with a little modification....I set up the subject and then put the color down on the paper where I think it will be in the final drawing. Then while waiting for it to dry I do a small sketch of it to get warmed up. The color doesn't fall into place most of the time but I like the result.

On Saturday Alanna invited us out on an "extra" sketchcrawl in order to join Matthew Brehm, who was visiting Portland with students.  It was a fun sketchcrawl, made more fun by cafe chatting afterwards.  Thanks for joining us, Matthew!

While my drawings weren't unmitigated successes, I did learn from them and felt satisfied that my work was getting somewhere.  All of my drawings were very specific experiments.

In this sketch at the Saturday Market, I attempted to focus in one one small area (an area that's actually hard to notice over the hustle and bustle of the market) by leaving other areas vague and setting out the bounds of my drawing right at the beginning: tree, tent top, and lamp post framed the area I wanted to work on.

We moved down to the Waterfront, between the Steel and the Burnside bridges. I experimented further with framing, leaving areas outside my focus unfinished and thus calling attention to an area that might otherwise be lost in the shuffle: my beloved Eastbank Esplanade, which connects up to the bridge and then descends right to the water level so you can stroll along the river among the ducks and geese.

Finally, I experimented with using a gorgeous ink - J. Herbin's Ambre de Birmanie - loaded in a water brush as a base for a loose sketch of the Japanese Historical Plaza on the Waterfront. (Unfortunately the color has been altered by my scanner.  It's like a resplendent, orange-leaning yellow ochre that is not even slightly muddy - a lovely, glowing tone that was exactly what I hoped for. )

My intent was to use minimal watercolors in support of the ink, letting the entire drawing really pivot on the amber, but I ended up messing with it afterwards as the amber was a very strong tone and should probably be used in smaller quantities. I need to practice this technique a lot more but was very happy with the ink, and with the feel of the ink on the paper in conjunction with watercolors. 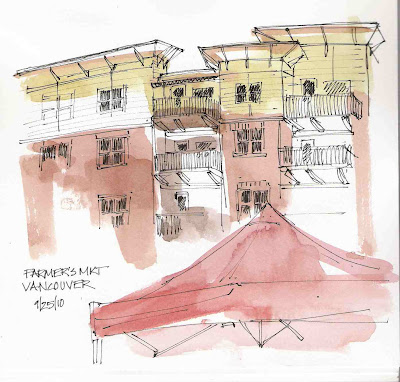 At the end of September we gathered in Vancouver to sketch at Esther Shore Park and the farmer's market. I turned a little away from the market to get this view of some nice architecture.
Posted by deb rossi at 10:58 AM 1 comment:

I joined the sketchcrawl group last weekend. The Vancouver Farmer's Market had so many delightful colors, I sketched this one of the flower vendor.