Urban Sketching Workshop was a success! 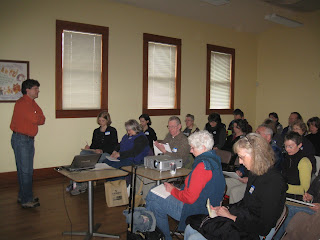 He got everyone started drawing from a photograph. 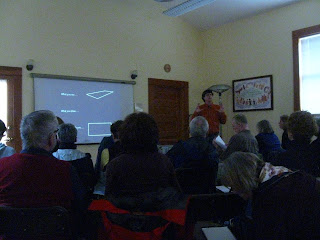 He went through a lot of information in a clear and concise way, with some strategies to use and the chance to practice those techniques with quick 2 minute sketching exercises. 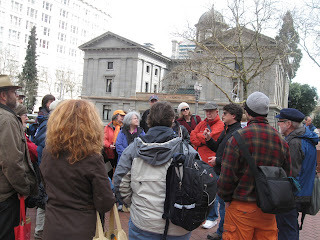 We met up again at pioneer courthouse square. 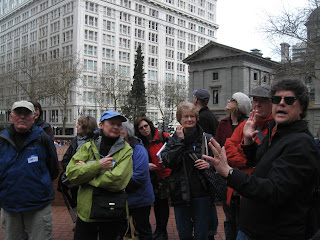 He gave us pointers and an assignment, then sent us out to sketch. 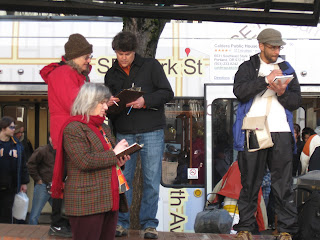 Matthew came around and gave tips and pointers 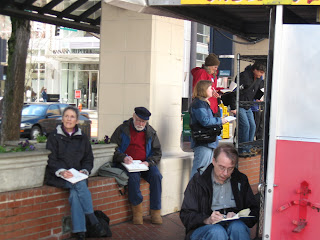 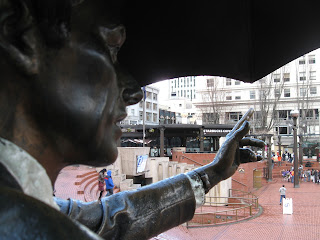 this guy kept me dry and gave me the opportunity to practice framing. 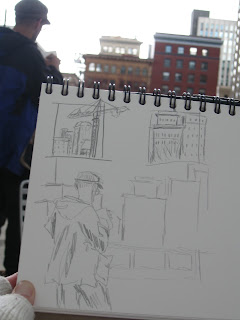 This is my favorite sketch of the day. I like the little thumbnail of the crane on the top left corner, and then i liked capturing Tony sketching from the dry, covered area at Director's Park. 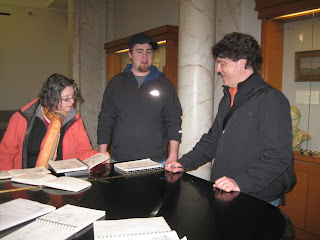 At the end of the day, we met up at the central library to share sketches 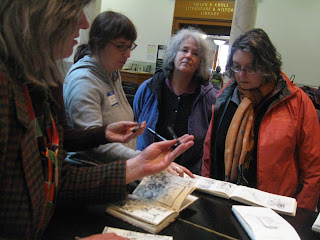 and of course, talk about pens. 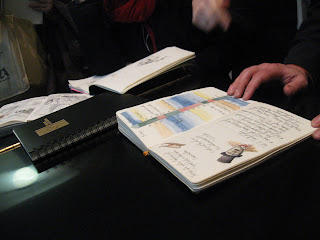 ﻿Matthew let us peek at the pages of his journal...very inspiring!
Posted by Alanna Beckwith at 11:05 AM 2 comments:

It had been a while since I had gone out with the group and it was nice to see everyone and sketch in an area of town I don't often find myself. Architecture and buildings aren't really my thing, but it's a good thing to do from time to time, and being out with the group is a fun way to expand my horizons. I drew the pharmacy and a couple quick sketches of the group. I seem to be sitting on the roof of the building across the street, but I seem to alter the perspective to this aerial view from time to time. My butt was on the ground, my eyes were on the telephone pole... 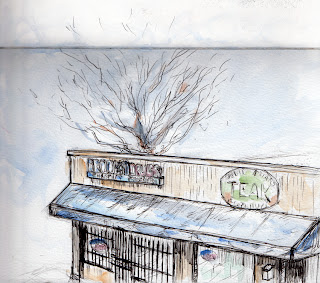 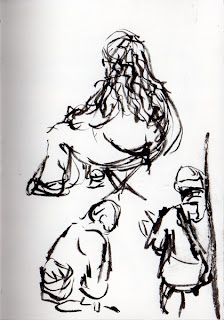 Posted by evensketchier at 9:56 AM 2 comments: 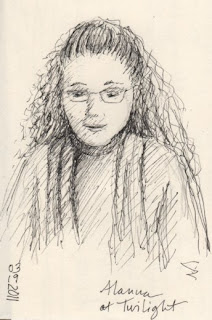 I met up with our local urban sketching group for coffee then sketching, then for lunch at the Twilight Cafe, when we chatted and passed around our sketch books. The rain clouds threatened but withheld their store, and the sun even peeped out for a few minutes that day! It felt great to sketch outside for a change especially since I had such good company.

I sketched this familiar landmark in SE Portland. The sign has a certain charm for me, although I don't think I have ever been inside the theater. I see from their website that the theater has gone through several big changes through the years, from a vaudeville house in the 20's to specializing in family movies in the 50's, then to X-rated movies in the 70's and 80's. In 1993 it was renovated and started a new life as a venue for live music, as it continues now. I'll have to check out the inside sometime.
Posted by Janene at 12:32 PM 6 comments:

Here are my contributions from the Brooklyn Neighborhood Sketchcrawl. While most of the group sketched the storefronts on SE Milwaukie, I was attracted to this bit of blight in the other direction. 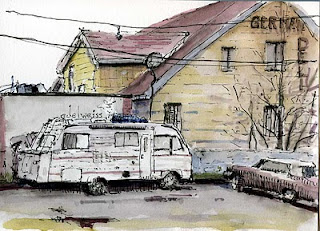 We met for lunch at the Twilight Lounge and I immortalized Kalina and Anthony in my moleskine. 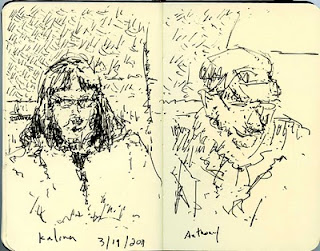 
We had a good turnout: Bill, Marco, Kalina, Janene, Louise, Jill, William (a new sketcher!), Tony, Colin and Luna, oh and the girl who was biking past and sat next to Jill to sketch! 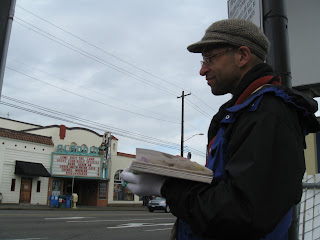 We started out at True Brew coffee shop on Milwaukie, but hurried outside to take advantage of the blue sky (that was more gray by the time I took photos). 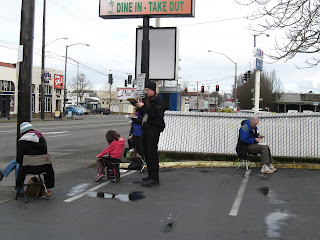 Many of us sketched the Aladdin, but Bill decided to look the other way and capture the German-American essence of the neighborhood. 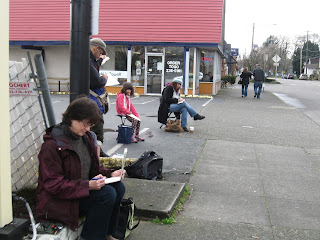 I found that a lot of folks were interested in what we were doing. 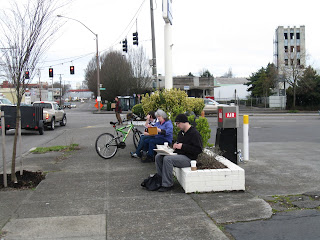 It was a loud place to sit and sketch, but I think we all enjoyed ourselves. It's always fun to sit as a big group and sketch, too. We definitely attract attention that way, too! 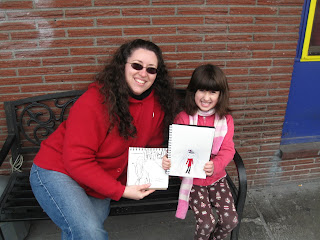 Me and Luna, the youngest Portland Urban Sketcher drew each other. 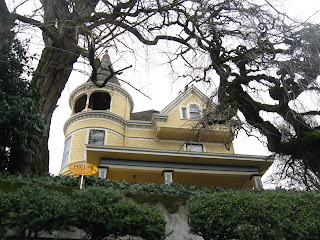 We found a decent vantage point from which to draw the Poulsen House. 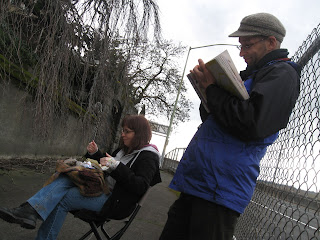 Here are my sketches from the day: 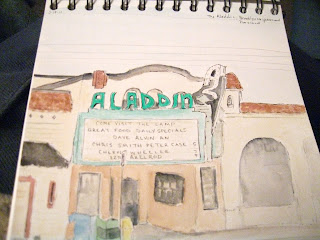 for some reason some of them are turning on their side and there's nothing I can do to rotate them. They are uploaded the way I want them, but they flip on bloggers end of things. anyway, stretch your neck a bit to view these. 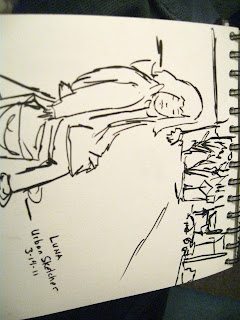 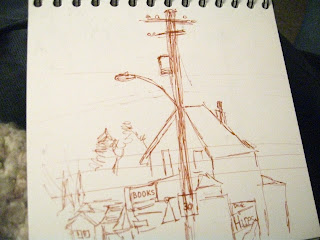 At the Twilight Cafe & Bar for lunch. 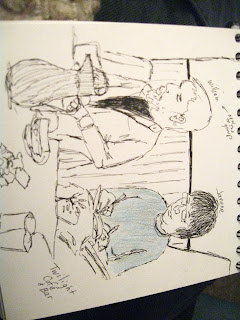 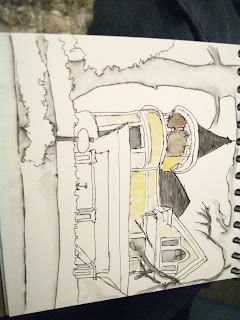 A great day for a sketchcrawl! Thanks everyone for making today a good day!
Posted by Alanna Beckwith at 10:54 PM 3 comments:

The Urban Sketching Workshop is filling up fast! Only 8 more spaces available before you're on the waiting list! To secure your spot in this workshop, please email alannarandall AT yahoo.com to receive payment instructions and then send in your payment ASAP.
Posted by Alanna Beckwith at 1:48 PM 2 comments: 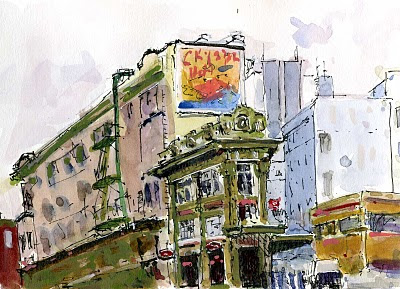 I met up with Colin, Deb, Kalina, Vicky and Alanna near W Burnside this morning. We were expecting rain and cold but were pleasantly surprised with just cold. This sketch is of the Ringler's Annex pub which also happens to be where we met for lunch.

I enjoyed seeing you all today. Looking forward to next time.
Posted by Bill Sharp at 3:38 PM 1 comment: