This is my last vacation sketch I promise! With the fog and salt spray blowing in your face it is hard to believe you are but a few minutes from the hustle and bustle of the city. There are lovely trails here and a wonderful visitor center. 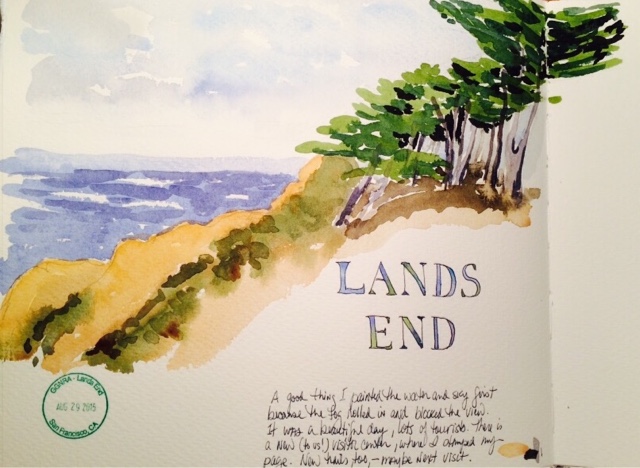 Posted by Dailysketches at 10:57 PM 2 comments:

This is the view from the motel where we stayed which is on Tomales Bay. It is a short drive to Pt.Reyes from here. I saw many white egrets and other birds. In the fall it is a bird watchers paradise. 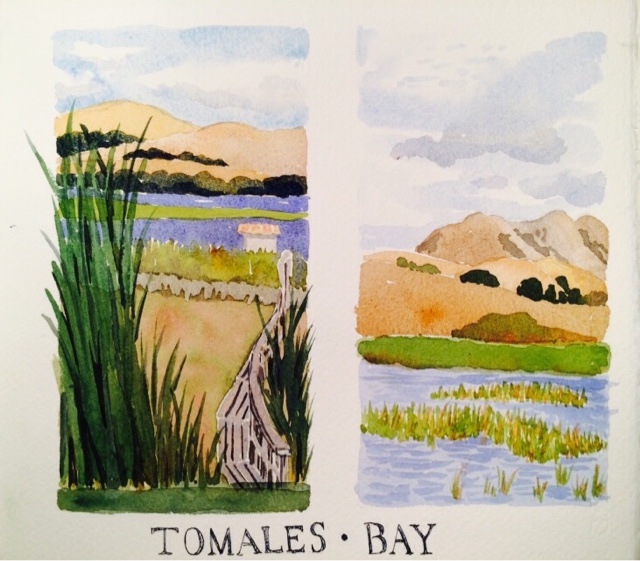 Posted by Dailysketches at 10:49 PM No comments:

Email ThisBlogThis!Share to TwitterShare to FacebookShare to Pinterest
Not exactly urban and not in Portland! My husband and I took a trip to our favorite place on the West Coast, Pt.Reyes National Seashore. This is a historic dairy farm on the furthest point of the peninsula. It
was very foggy and cool but I persevered! 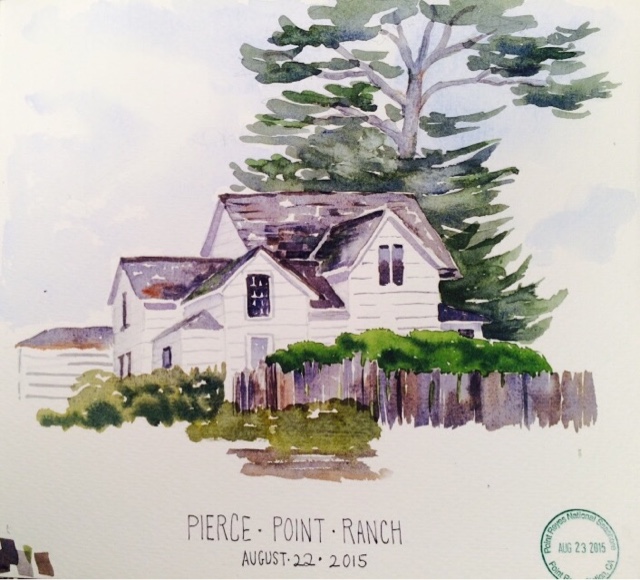 Many thanks to Aurora Colony Days organizer Susan Black who went out of her way to encourage sketchers to attend her event on August 8. The other residents of Aurora were very kind to us while we were there, as well - two people walked up and told me how grateful they were to have artists out in their streets!

I sketched a large yard sale that was happening under a massive walnut tree, which turns out to be 131 years old.  Then I wandered down the street and sketched Aurora Mills.

I was hampered by the fact that I had accidentally brought an old watercolor palette from which I had removed all the "good" colors, leaving only a few pigments: an overly saturated yellow, an under saturated (but nicely textured) blue, napthol red, and a burnt sienna.  It took a lot of effort to get any blue onto the paper, and the slightest touch of yellow was shockingly intense, so these sketches were a bit of a struggle - I was glad to have that rust tone, at least!  Anyway, art is defined by its limitations...

These sketches are viewable at a larger size in my flickr feed. 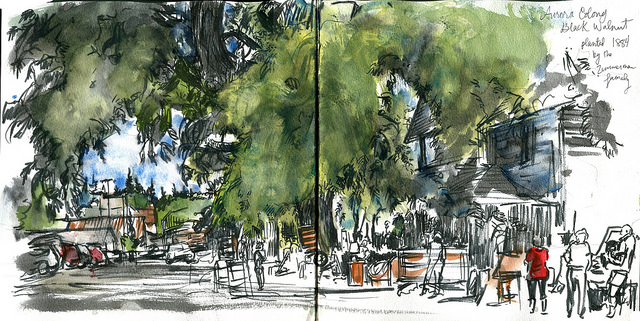 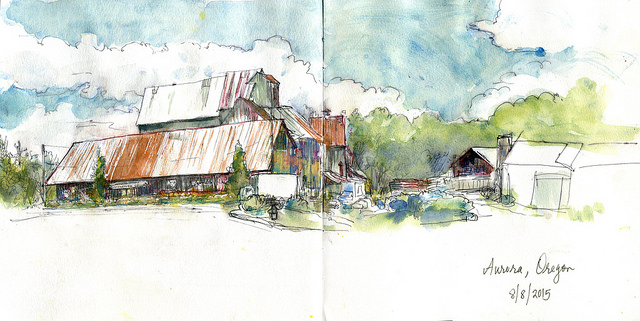 Posted by Portland Urban Sketchers at 9:10 AM 6 comments:

I got to the sketching site a bit late so only did this one sketch of the scene. As usual I ignored all of the people there for the Mt Tabor cart Race (which was exciting) and did some of the buildings and landscape beyond.

We met up at TaborSpace, a church converted  into a coffee shop/event space -- sketch worthy in its own right. Then we headed out for sketching at Mount Tabor. We got a little exercise hiking that road.

I started out sketching a distant hillside house but got evicted from my spot for safety reasons.  I suppose I was vulnerable to potentially out of control soapbox cars.

So I switched to sketching the crowd. Here's my offering: 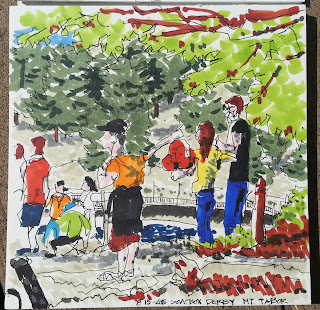 The last thing we did was go to Kay's beautiful nearby home for some nosh and conversation.  Good times!
Posted by Andrea at 11:17 AM No comments:

We are so happy to have New Seasons blocks from our studio!
No more driving all around for groceries!  YAY!
We went opening day before we opened the studio.
Mostly they were setting up and greeting their new customers,
and everyone was in their best duds. 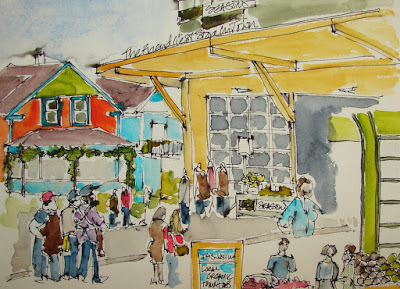 Later in the day music was played, and the band was setting up.
The neighborhood is in transition, and the old houses
(which we love) all brightly colored are sitting next to high rises. 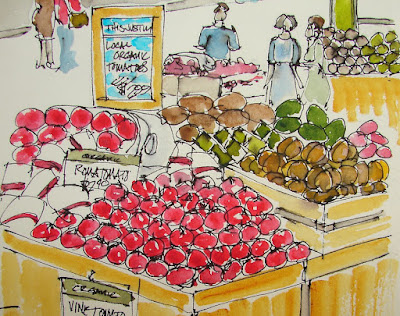 The produce is heavenly.
We will still go to Farmer’s Market, especially during berry and peach season,
but so far (keep fingers crossed) New Seasons still is mostly organic. 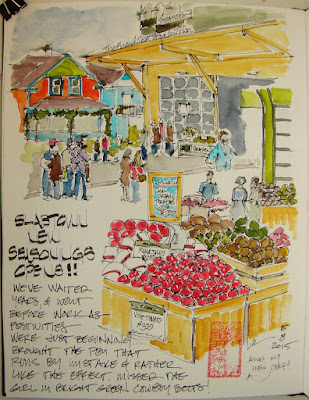 Drawn onsite, some watercolors onsite.
I picked up the wrong pen, filled with Heart of Darkness Noodler's ink --
which is NOT waterproof.  I kind of liked the runny ink mixed with the watercolors.
Strathmore mixed media journal.
Finished in studio.  First time using my new chop!
Posted by dkatiepowellart at 10:30 AM 1 comment:

A fun morning of sketching among all of the activity of the day. Aurora is a very interesting place!

6 urban sketchers came to enjoy a mild day of antiques and historic buildings in Aurora yesterday.

I sketched the train depot building. 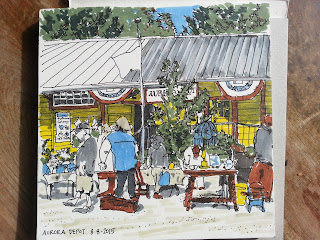 Later on I stopped by Ferenbacher Hof and sketched this tree with vines at the bottom.   I'm doing the spiral sketching method for both of these. 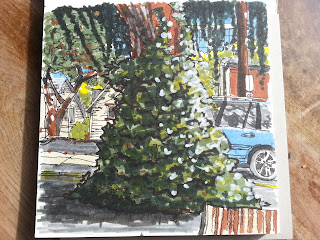 It's a little bit urban.

I squeezed in some sketching in Manzanita. 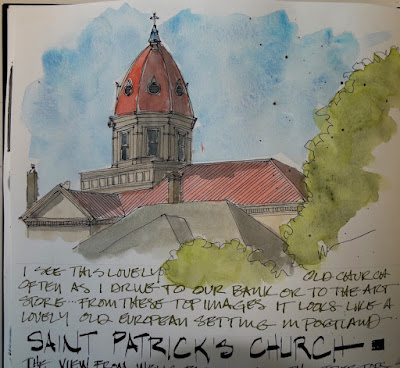 I love Saint Patrick’s Church in NW Portland.
I drive by it all the time as it sits across from our bank.
The Beaux-Arts church looks like it belongs in Italy,
set into cobbled streets surrounded by a park and houses from that era.

It sits nearly under and slammed up against the stupid freeway that was built after it.
All around is blacktop, vast possibilities for parking.
(Image below drawn from Google streets — not live from the freeway.) 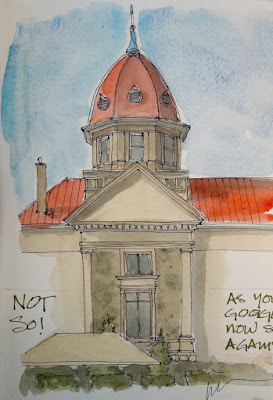 The sketches were done onsite, the grey shadows were created
onsite using diluted inks as an undertone.
The text, watercolor and the sketch of the Google maps images
(the freeway) were added in the studio.
No I did NOT stand on the freeway to sketch! 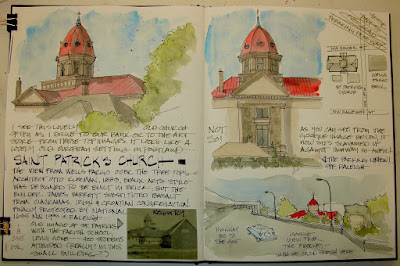 Posted by dkatiepowellart at 12:58 PM 2 comments: