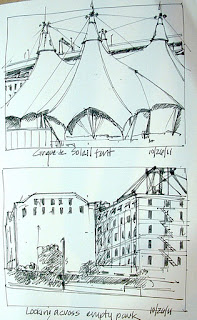 This tent had such as nice soft, organic form....although my drawing doesn't show any color, when I was drawing I was conscious of the contrast of the white tent against the background of the sky and freeway above. For the other drawing I swivelled 180 degrees to look toward the river front. These buildings must be old warehouses or factories...the one on the right has a great water tower on it which I wanted to include but didn't!...just poor composition planning.
Posted by deb rossi at 3:12 PM 1 comment:

Last week, Deb and I sketched the Cavalia tent from an empty lot near NW 12th and Marshall.
When I sketched it, I noticed that there were rope ladders hanging from each of the tent peaks. The peaks are more than 100 feet tall. No sign of the 50 horses or acrobats, but maybe someone else will see them another day. 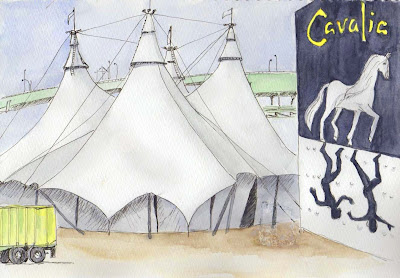 Now I'd like to see Deb's sketches and some from the Peculiarium.
Posted by Vicky at 9:14 PM 4 comments:

Here are my sketches from the wonderful sketchcrawl in Seattle last weekend. Since Alanna and I sketched in the same places, you'll see some repeating scenes.

On the train ride north, we talked and sketched eachother, (as well as an agreeable young woman who offered to model for us). I think by about an hour into the trip, Kalina had convinced her to become an urban sketcher.:) 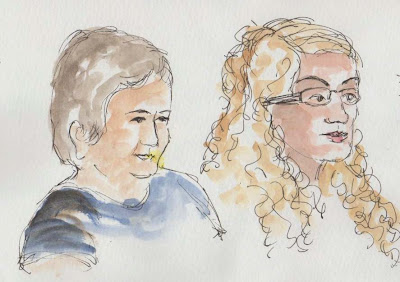 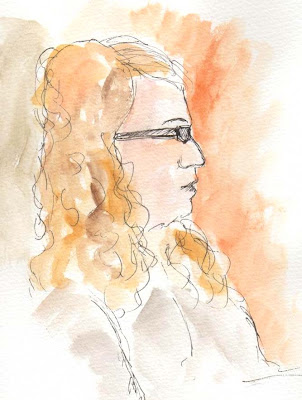 After the warm welcome from the Seattle Sketchers, I joined the group going to Pioneer Square.

The first sketch I did was of Merchants Cafe, Seattle's oldest restaurant. It still seems to be pretty busy. 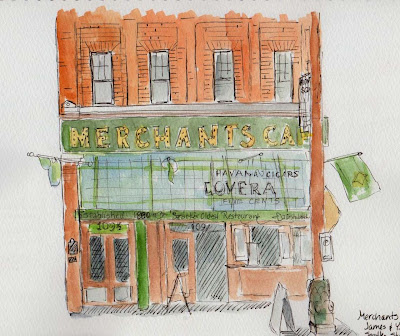 Then I sketched in the park. Lots of tour groups left from here. There was an artist who was displaying his work in hopes of sales. In drawing the group, I was trying to put into practice Veronica Lawlor's symposium advice of seeing the group as one whole, rather than as individual people. 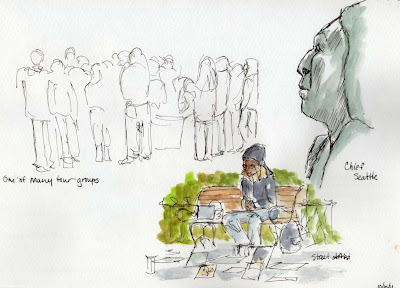 Windows and signs... It's pretty hard to imagine that rooms were once that cheap. 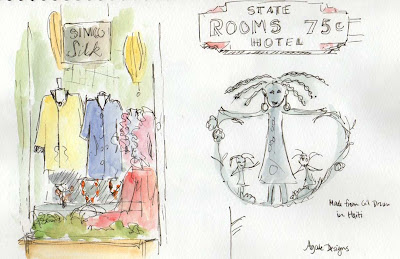 After the group sharing of sketchbooks, Gabi took us down by the ferries which were unloading huge numbers of soccer fans. I sketched the ivy covered viaduct. I'm hoping that Gabi will post his sketches, since some of us were lucky enough to have been sketched by him. 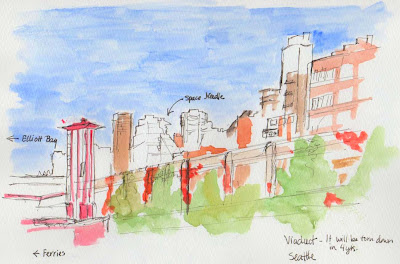 This man, all in purple head to toe, was smoking near the garbage can. 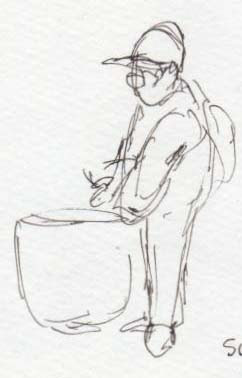 This family seemed to be waiting silently for a ferry to come in. Maybe they were entranced by the gorgeous bay and mountains. 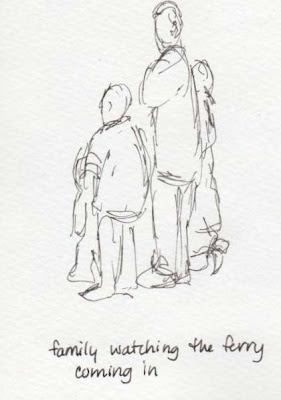 It was a beautiful fall day in Seattle and it was very fun to meet the other sketchers and to sketch in their city. I'm looking forward to another group sketchcrawl together.

Last Wedneday I met up with Linda D and Vicky to try out the algorithmic walk that Colin had mentioned in a previous post as something interesting to do... The photos below are in reverse order (sorry something that I thought I had figured out but the blogger seems to have taken over). I started at Starbucks on 23rd and Hoyt ...the map below shows where I was and what direction the drawing was in relation to it. 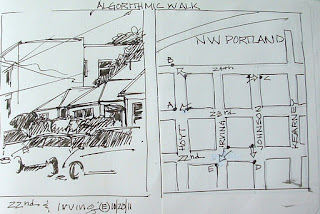 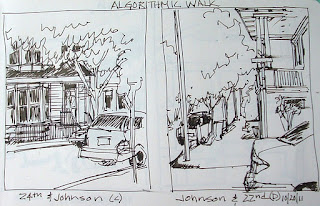 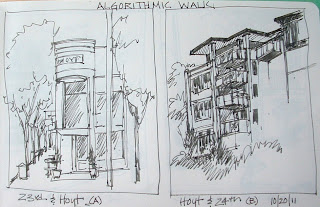 This is something I will do again. It's an exercise and a discipline that gets me out there to draw!
Posted by deb rossi at 12:44 PM 4 comments:

The Portland Urban Sketchers caught the train to Seattle for a gorgeous day of sketching in Seattle!

On the train, were Kalina, Joely, Sidne, Gregg, Vicky, Tad and me (Alanna) 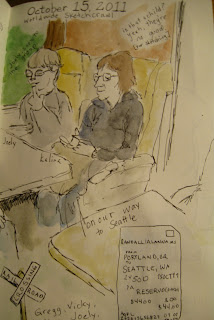 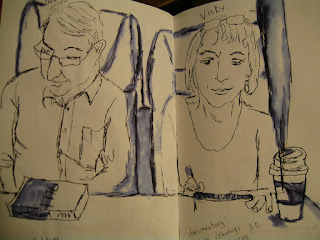 It's a three hour trip with ample time for sketching, drinking coffee, reading and chatting.
Once we got to Seattle, wow, were we surprised by the great crowd of sketchers waiting to sketch with us! Thanks Seattle Sketchers for welcoming us! Portland's Bill Sharp was already in Seattle and was there to welcome us. 27 of us in all met at the train station and drew around the Pioneer Square and International District before meeting up to share our sketchbooks.
Here are some of my sketches: 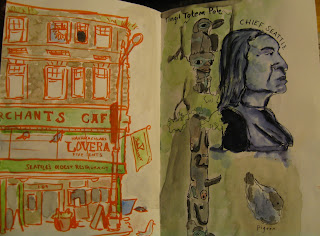 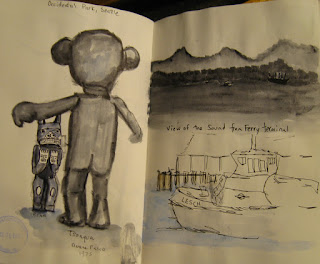 After meeting up at the cafe, Gabi Campanario took us down to the waterfront for some sketching. It was such a gorgeous day--perfect sketching weather! 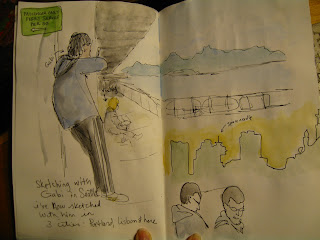 Back on the train (a day trip is hardly enough time to sketch Seattle properly), we enjoyed the gorgeous sunset skies over the sound from Seattle to Olympia). These two gals who I sketched below were very friendly. We gave them our blog address, so maybe they will see this sketch now that I finally blogged! 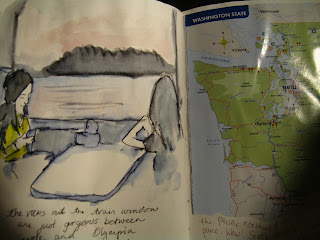 Back home, I had time, waiting for my bus, to do some night sketching, and capture Union Station. 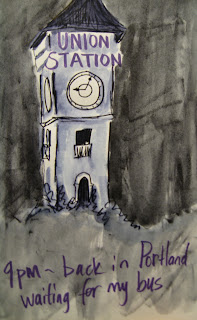 This trip was so much fun that we're talking about making it an annual event! Stay tuned for a possible sketch trip to Whidbey Island in the summer!
Posted by Alanna Beckwith at 5:46 PM No comments: 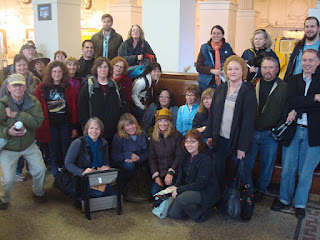 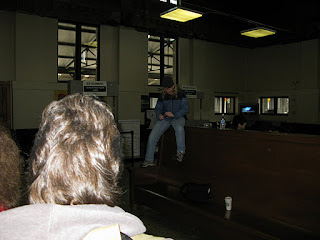 Laurie, who photographed the group
I joined 20 or so sketchers from the first Portland/Seattle joint sketchcrawl last Saturday for a glorious fall day of urban sketching.

We met at the train station and divided into 2 groups. One group went to the Pioneer Square area and I went with the other group to the International District.

My two sketches below. I hope others will share their work soon. 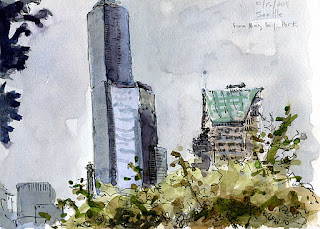 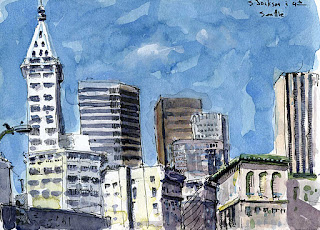 Skyline from S 4th and Jackson

Gabi caught up with us later and we met at a coffee shop to share our work and pressure Gabi into revealing the location of the next Symposium. 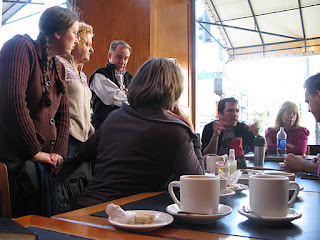 Gabi led most of the Portland folks to the Ferry Terminal for a few last sketches before many of them had to board the train for home.
Posted by Bill Sharp at 10:34 AM 1 comment:

Sitting in a coffee shop in  Beaverton a girl walks up to the counter, my friend with me says, "Sketch her." I quickly open my book bust out my pen and I sketch her as quick as I can, because in just a few seconds she'll move, or be gone. I try to remember the details, the colors, the pattern on her pants, the wrinkles in her sweatshirt, her lean. She is gone, and I fill in the background with little scratchy bits of pen here and there taking note of the details, colors, and textures. When I'm home I use my watercolors and pencils and fill in the colors and patterns from memory. A sketch, an idea, a fleeting moment, is captured.

Posted by evensketchier at 9:08 AM 3 comments:

A Portlander in Scotland

As my fellow Portland urban sketchers are aware, I have just arrived back home after a wonderful 3 week visit to Europe. It had been many years since my last serious vacation and what might once have been a travel bug had swelled into a travel mammoth! It felt so good to be back in that traveler's mindset, thinking only about the day. What shall I sketch? What would I like for dinner? Perhaps I shall have a beer? I'm pretty sure I went at least five days in a row without once remembering that I work for a living - the traveling lifestyle swept me up that entirely.

The first two weeks were spent in Scotland, and have been reported extensively at my blog. Here are some sketching highlights from that time.

I flew out of Portland on September 1...

Made my "base of operations" in Glasgow (which I love), and managed to meet up with awesome Glasgow Urban Sketcher Stuart Kerr...

Did a couple of day trips to Edinburgh, which is possibly the most beautiful city I have laid eyes on (though my heart belongs to Glasgow)...

Then took train and bus to the Highland fishing village of Ullapool, where I did some hiking but also had wonderful views from cafes and pubs when the weather turned wet...

Traveled to the Isle of Skye, which was mostly a lost opportunity because weather was bad and most of the dramatic vistas were obscured...

Continued by bus, ferry, and train to gorgeous Glenfinnan, also in the Highlands and currently gaining some notoriety as a Harry Potter filming location...

After that, I visited with friends in London and then continued on to Belgium... but more on that soon!
Posted by Portland Urban Sketchers at 11:48 AM 4 comments: