Alanna:
Here is the link to OSA http://www.oregonsocietyofartists.com/

Check out our newsletter:
http://www.oregonsocietyofartists.com/brushmarks/brushmarks.pdf and
note the free event on June 9th, we would love it if you or anyone
fromthe group would come. It is free with a free lunch.
William Woods

Posted by Alanna Beckwith at 1:45 PM No comments: 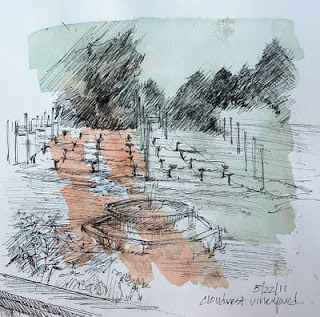 A small group of us met at Cloudrest Vineyard to sketch on Sunday and it worked out well until the afternoon and then the rain came in a downpour!

Linda has posted a group photo of our sketchbooks to the Portland Urban Sketchers facebook page. 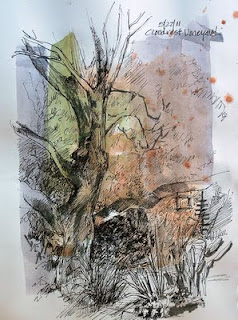 Several of us met at Linda's vineyard in Hillsboro for a soggy sketch session. 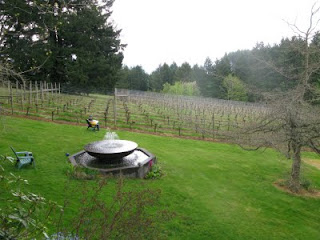 Linda gave us a tour of the property and then we had a relatively dry hour or two to draw. 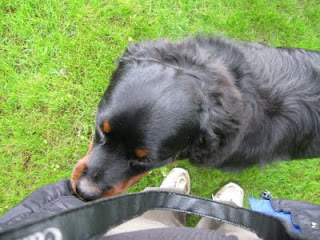 Our other host for the day was Luka, one year old ball of energy. 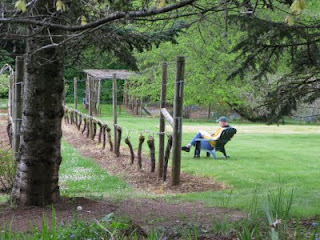 Don Colley, visiting from Chicago, joined us for the day. 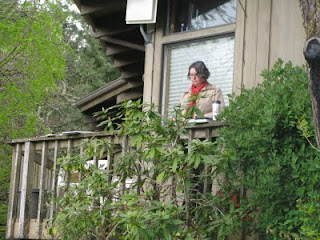 Deb found a sheltered spot on the deck to draw until lunch. 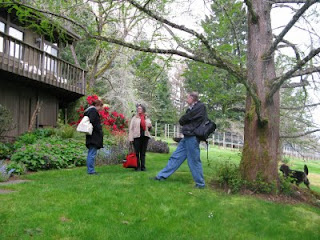 Greg, Kalina and Deb chat before starting in after lunch. 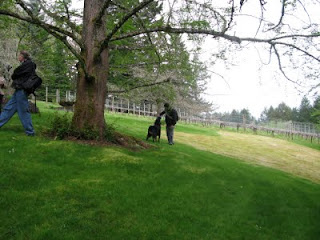 Marco distracts Luka for a minute.

Thanks to Linda and her husband, Fred and, of course, Luka, for their warm hospitality. Hopefully others will share their drawings from the day.
Posted by Bill Sharp at 9:01 AM No comments: 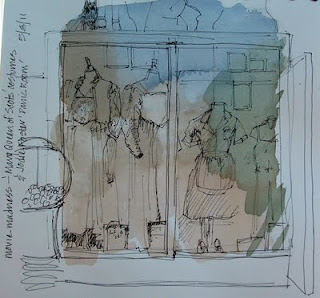 Our day sketching at Horse Brass Pub and Movie Madness had lots of potential but was a pretty crummy day for sketching outside. The outside sketch was done earlier in the day after we met up at The Red Square Cafe but after that it was all inside!! 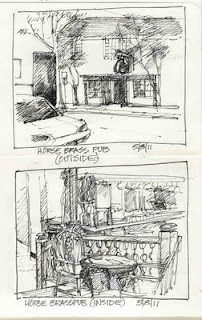 On Sunday I traveled to a winery out in Hillsboro (Willa Kenzie Estates). The ride was fun but again the rain just drove us inside. Fortunately we were prepared and brought lots of goodies to snack on between wine tasting (the others were tasting- I was drawing!) 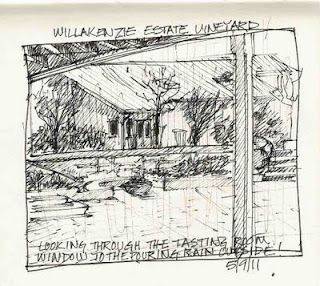 Some of us met up on SE Belmont at the Red Square Cafe for a rainy day sketchcrawl. 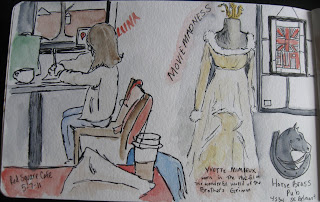 I didn't realize it until I got there that I was at the last page of my sketchbook! So, my sketches were all crammed together.
From Red Square, we checked out Movie Madness...where I drew a costume
Movie Madness At 33,000 DVD titles and 27,000 VHS titles, if Movie Madness isn’t the largest video store in the world, then it’s certainly a contender. Officially recognized by the Southern California Motion Picture Council for its outstanding contribution to the entertainment industry, Movie Madness is to movies what Powell’s is to books. And then there’s the museum. Yup, museum. In addition to the rental side of the business, owner Mike Clark – let’s just say a character in himself – has accumulated prop and wardrobe memorabilia from some of the biggest blockbusters ever to come out of the ‘wood. What this means is that, in the very same store that you’re renting your Hitchcock, the knife from “Psycho” awaits you. Or maybe you’re more interested in the alien head from “Aliens” or the time machine from “H.G. Wells’ The Time Machine.” Costumes worn by Barbra Streisand to Diane Keaton to Mike Myers are displayed as are all the lead actors’ wardrobes from “West Side Story.”

From there, we headed over to Horse Brass Pub, a traditional English pub. It was dark and full of items on the walls and bar. "it's going to be sketchy" said Deb, and she's right...I very sketchily sketched the pub. 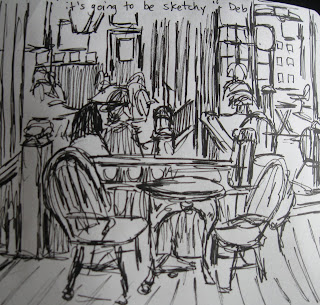 I sketched these on the end paper of the sketchbook...
...a black and white photo of Winston Churchill on the wall 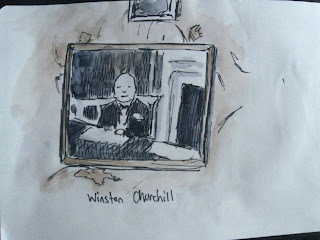 Vicky and I headed over to Tabor Space 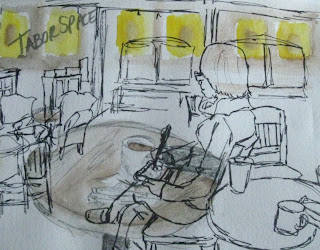 where i experimented with a new sketchbook and a water soluble graphite pencil that i wasn't used to. Result was that i didn't like the sketch, so i sketched right on top of it with a bold black pen....
and then the best part of the day was asking if it was alright if we could draw during a drum circle. What fun! I really enjoyed sketching while these folks kept the rhythm! 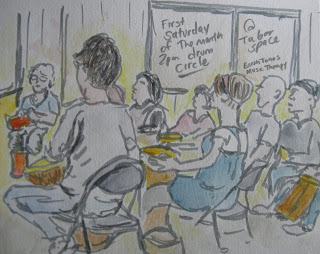 Drawing in the Dark and to the beat of Drums 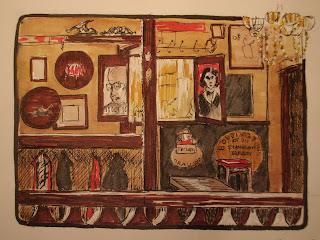 Today, some of the Portland Urban Sketchers sketched at the Horse Brass Pub. Here is my contribution, which is really an example of not knowing when to quit. My first mistake was putting a column almost dead-center in the sketch. I used pen and ink, then added watercolor, and when I got home, I decided to try to add a brown wash to everything except the kitchen window (center) to try to convey the dark interior. Didn't really work, so I added more ink (both black and white) until finally, I decided to stop. If you want to see a good example of dark pub drawing, look at Pete Scully's work instead. Still, I tried lots of things and I know I got some new knowledge from the experience. 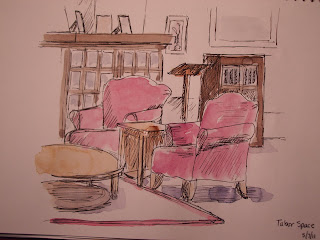 Next, Alanna and I carried on to TaborSpace and I drew some comfy chairs. 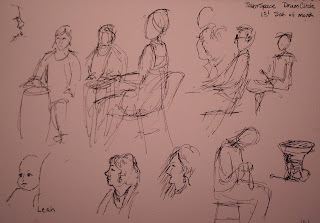 And then, the best part: Alanna asked if we could draw the drum circle that was practicing there. That was fantastic! With the pounding drums, it's easy to just get into the rhythm of gesture drawing and somehow the ink just flows. They were very a very welcoming group and it was a great way to end the day's sketching.
Thanks to my sketching buddies for another fun day!