The first 10 x 10 workshop on sketching vignettes at the Oregon Historic Society Museum was a total success. Looking forward to 9 more with these and other sketchers. The first three workshops are sold out but there are still spaces in the ones coming up later this spring and summer. 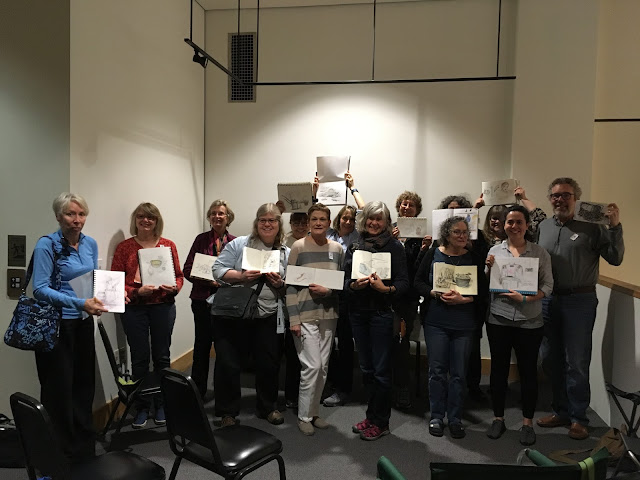 Email ThisBlogThis!Share to TwitterShare to FacebookShare to Pinterest
Labels: USK10x10

I got soaked riding downtown to meet with the other sketchers. 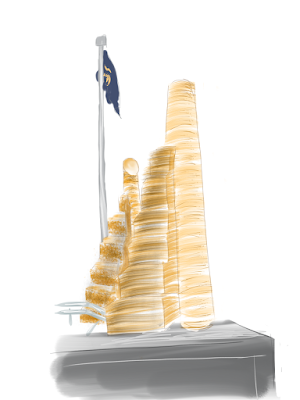 After coffee and breakfast we wandered out into the rain.   Which had settled down to, at best, a drizzle.   I hung out in front of the federal building all morning.

I started out doing the sculptures at the entrance while waiting for the March for Science to get started and reach us. 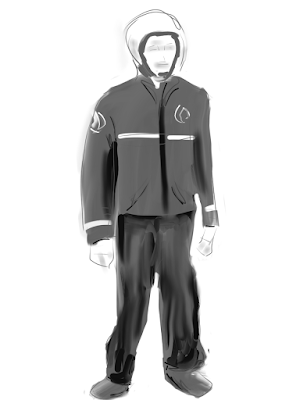 
Then a motorcycle cop who was directing traffic out of the way of the march. 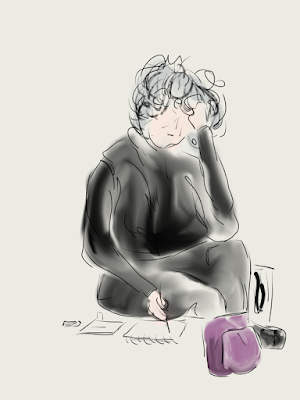 And finally, I caught Andrea lost in her own creative process.

To mark a new chapter in the Resistance movement I made a new accordion book to take to the March for Science on Earth day, April 22, 2017. 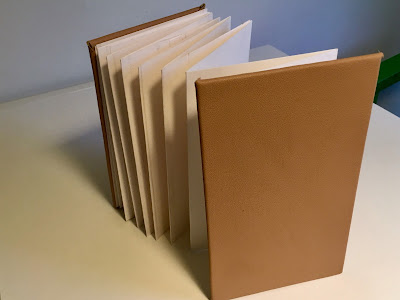 Every time I would find a good vantage point to sketch rain would start and I would have to scurry for cover. I did spot my favorite Unpresidented Brass Band right away who were tuning and prepping ahead of the march. 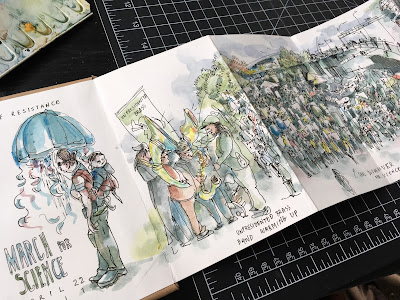 Sketching from the top of the of Morrison bridge allowed me to capture the crowd listening to the rally speakers ahead of the march. Congressman Earl Blumenauer addressed the enthusiastic crowd about the dangers of the government who does not believe in facts or science. 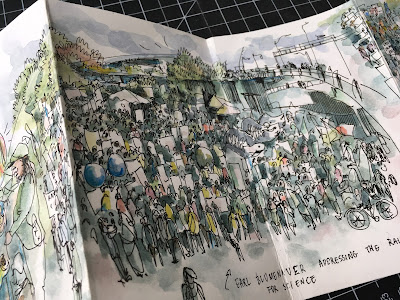 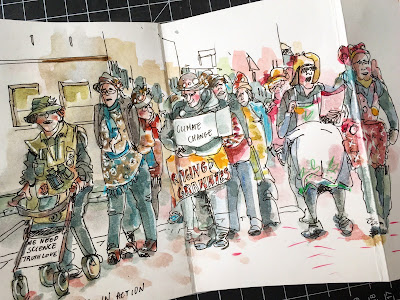 As the rain intensified I found cover in a parking lot on Columbia Ave. that allowed me to see the crowd as they were turning off Naito parkway. I used the same trick during the Women's March in January. 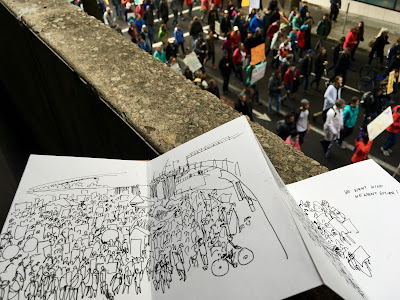 Most of color had to be finished at home, as I wasted too much time running away from the rain. 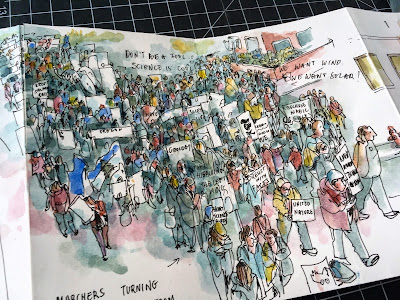 A small crew gathered at the Good Earth Cafe, cozy inside while it rained hard outside.

I sketched a few people in the cafe who seemed to be about to march. 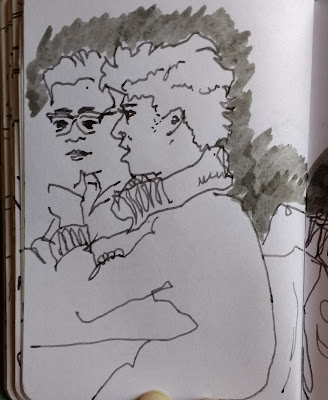 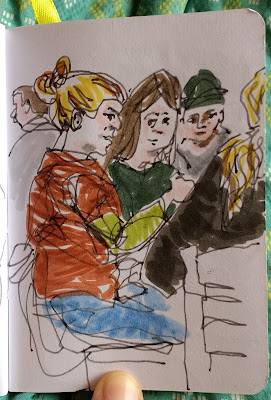 Then we all went outside.  The rain let up.  I focused on a view of the Portland Building.  There are a lot of protected views from the awning in front of the Justice Center. 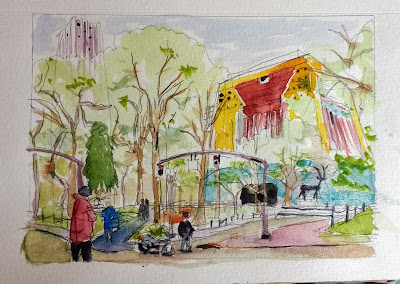 Finally we met up at Rock Bottom Brewery for lunch.  It was another delightful time.

Posted by Andrea at 9:17 AM No comments:

This is a reminder about our sketch crawl tomorrow!


With so many critical things happening politically right now, it is good to know where government functions are, and to sketch them. There are a lot of government buildings clustered around this spot. We will sketch around Lownsdale Square, at SW 3rd and Main, near the Elk Statue.  If there is a protest that day, we can sketch that too.  The Science March is happening tomorrow - so it will be a great thing to sketch.

Rain is predicted so bring your rain gear.
See you there!

I love this time of year.  So rich with promise. 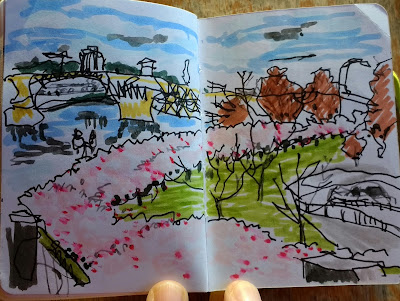 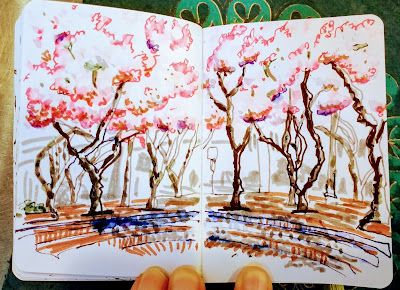 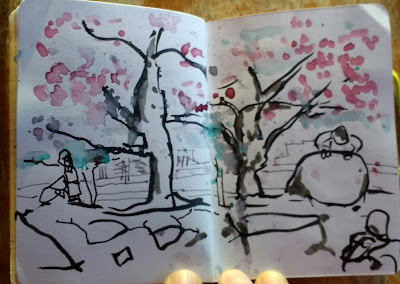 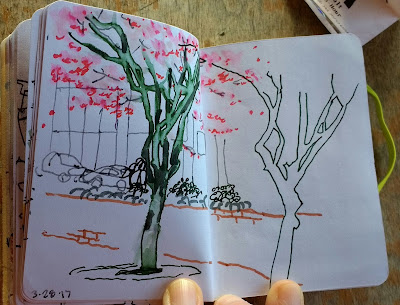 Posted by Andrea at 7:04 AM No comments:

One last try for the cherry blossoms on the waterfront.  Still blooming away.  But there's a rain of petals now, and a tinge of green as the leaves are starting to come out.
  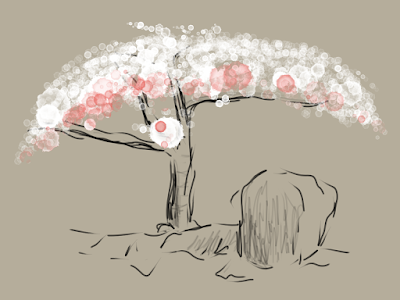 On this one I was trying for pen and ink for the tree and rocks, and for serendipitous splatters for the blossoms.

Granted, it took a while to find random splatters that I liked. 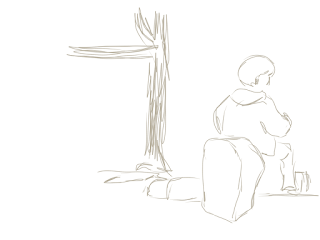 This was going to be a value sketch.
But the sun decided to leave us at this point and all of my shadows disappeared.
  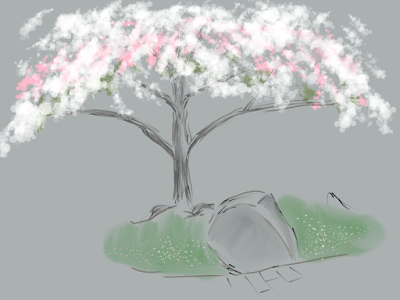 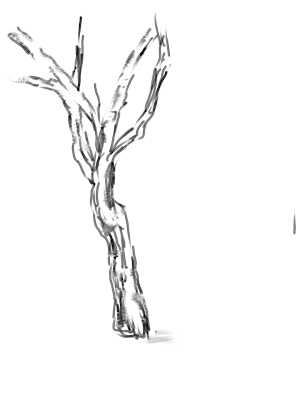 Finally, I remembered the brush that I'd brought to experiment with.  I used it to put down the vertical lines of the tree, and then used my finger to smudge in the faint horizontal lines of the bark.
Posted by ali at 10:40 AM No comments: