Hello friends! For those of you who have an itch to travel with your sketchbooks this spring and summer, here's a round-up of several events that may be of interest. 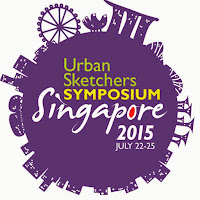 This spring, I sketched the blossoming cherry trees several times. Here are some sketchers from the first of the season, the middle, and finally the end--with the Urban Sketchers. 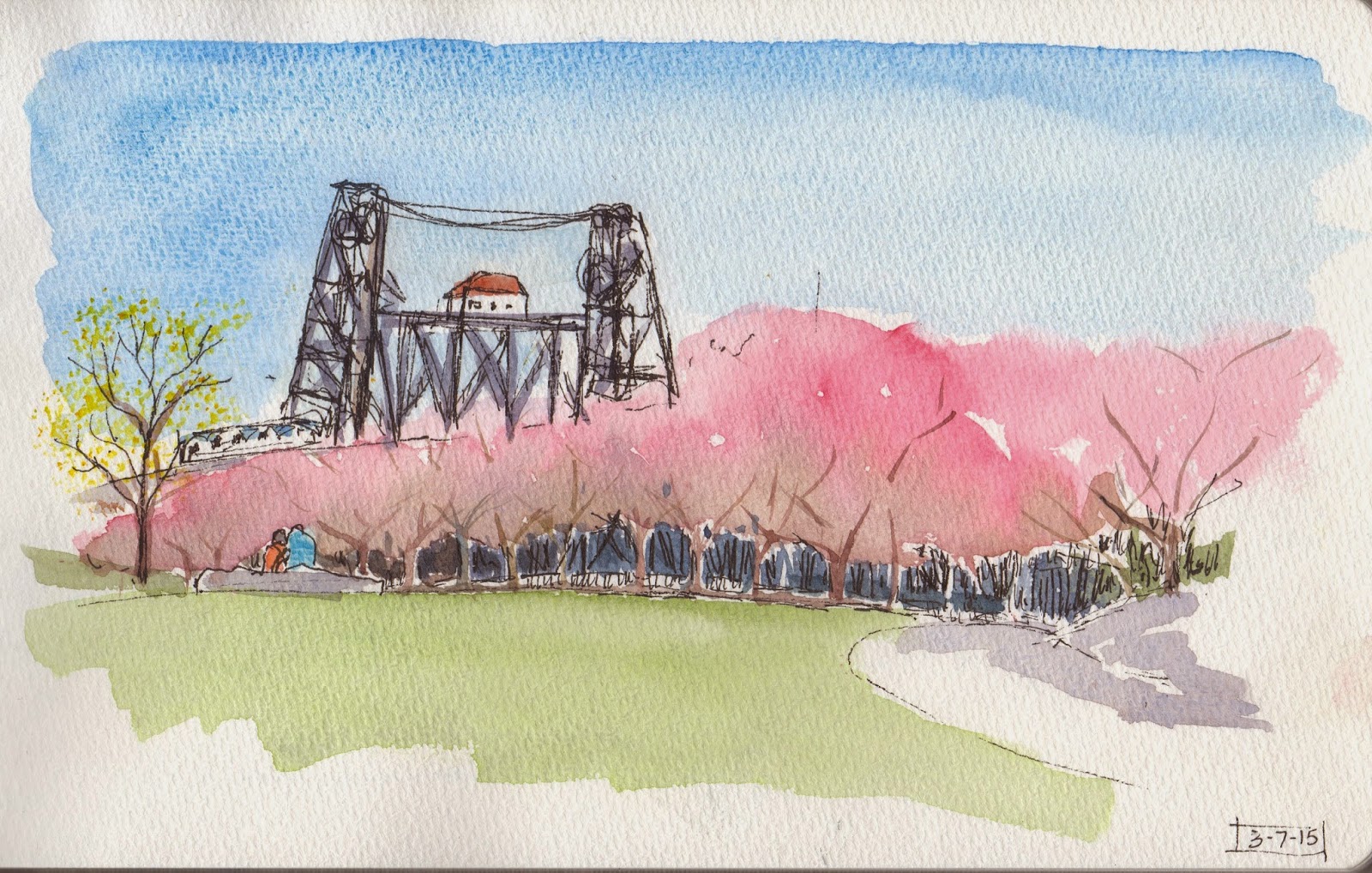 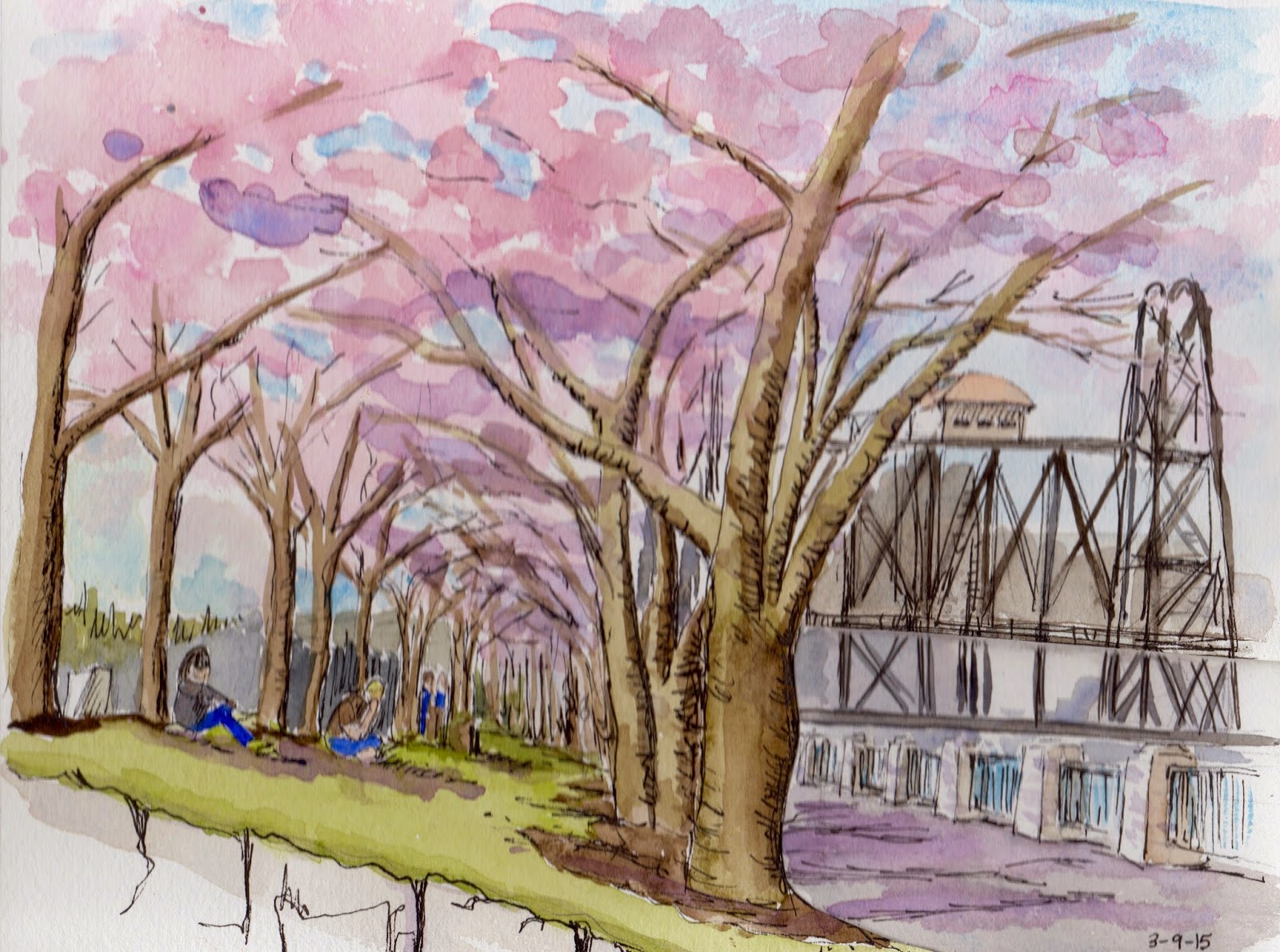 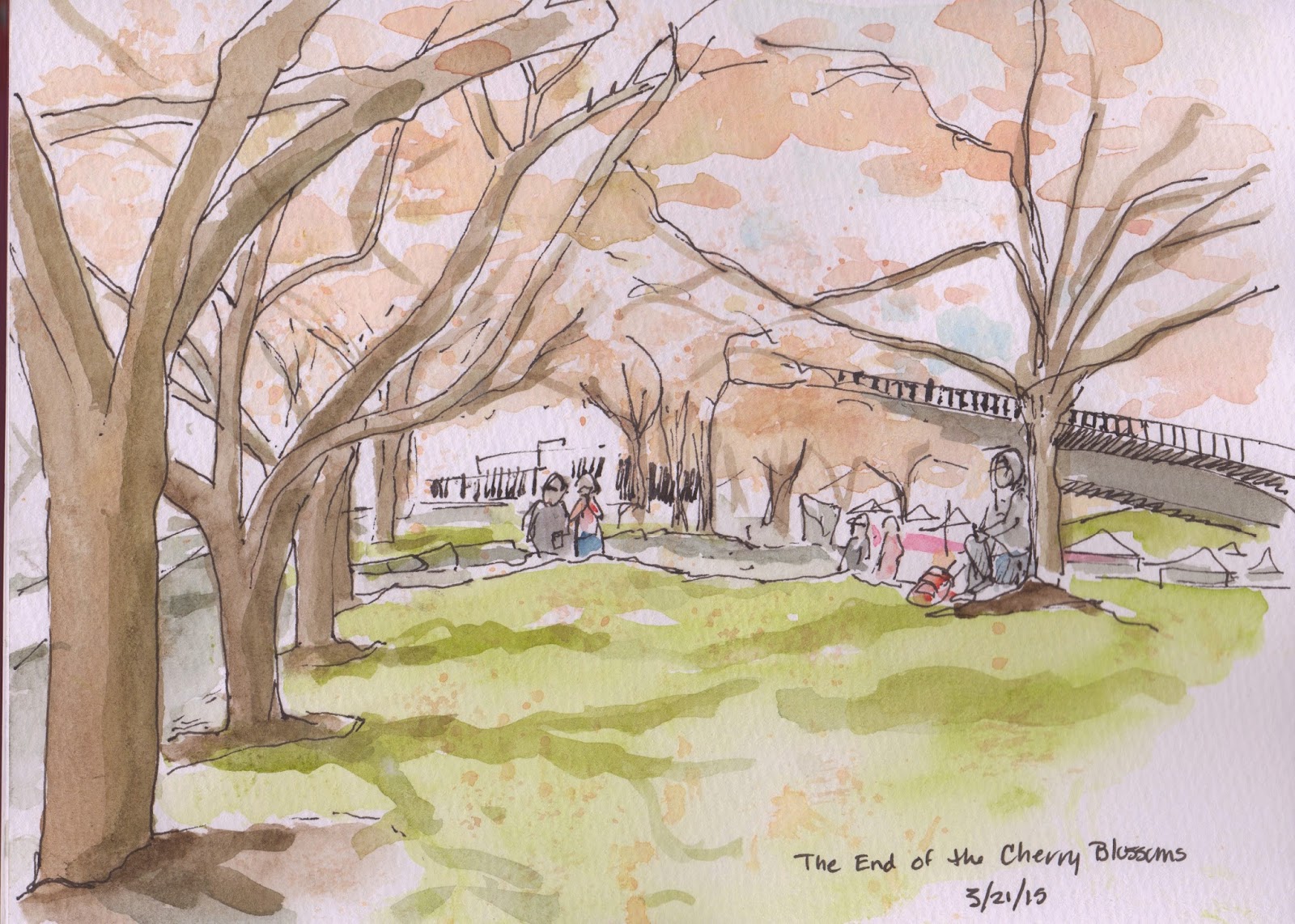 The one above got some of my splatters, and some rain drop splatters.

It was lovely to spend time with you all and lovely to share coffee, pizza, and conversation. 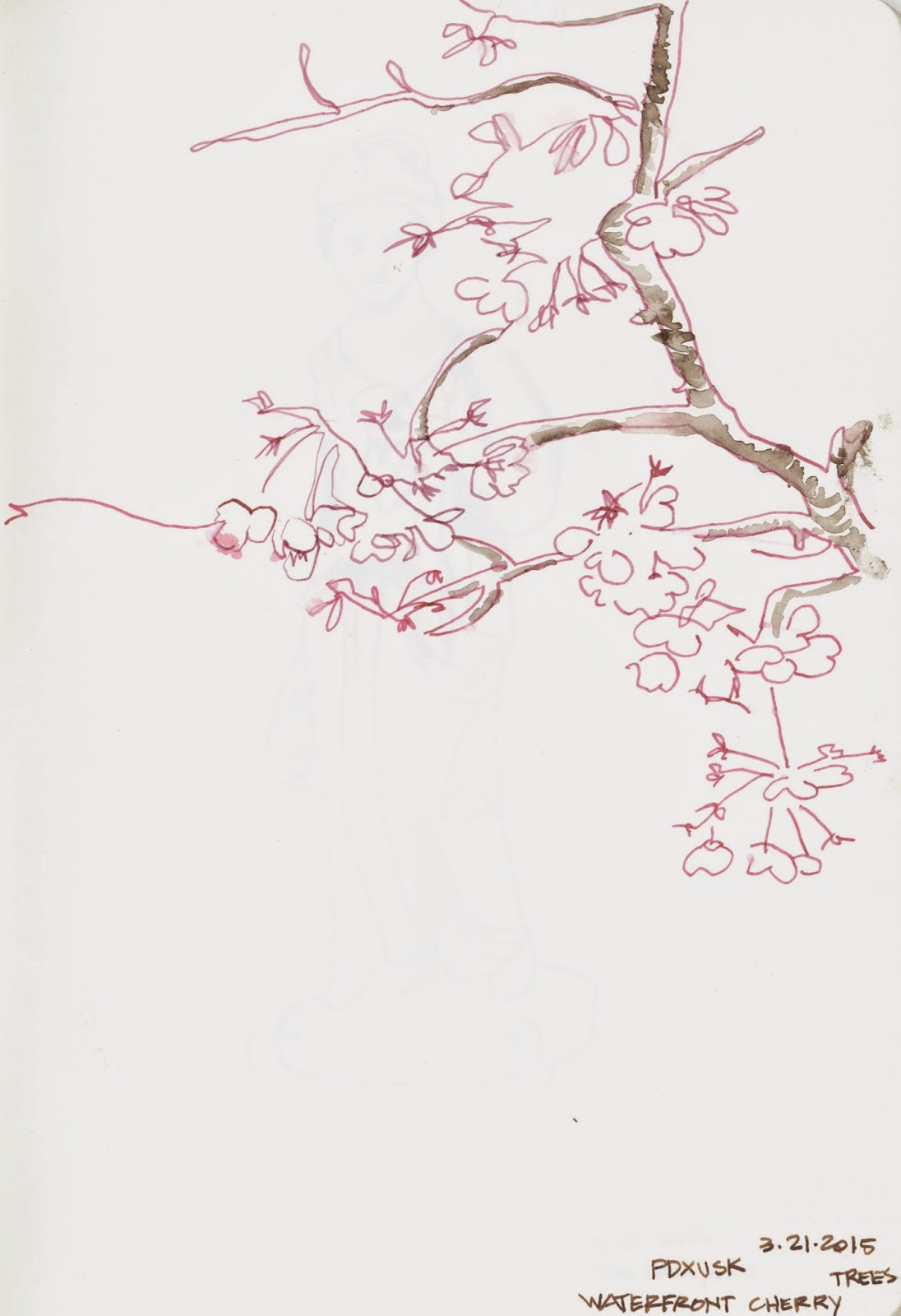 Another visit to the Portlland cherry blossoms

On my first sketching visit I was maybe a little too early- most of the blossoms were still in bud and not showing that snowy pink all over color.
This visit the blossoms were out but the leaves were vying for room so the snowy pink was being invaded by the green leaves.
Right in between would have been best.....but alas that did not happen.


It was nice to see a good crowd of us sketchers out there on this slightly chilly and windy day.
Posted by deb rossi at 3:53 PM 6 comments:

Sketching along the waterfront and old town

Thank you all for another great day of sketching! Last year's March sketchcrawl at the waterfront was the first time I joined the urban sketchers, and it's been something I look forward to every month.
After such a rainy forecast from the day before, we did quite well for weather (though I think last night's rain removed quite a few of the cherry blossom petals).
I tried out my new fine point Rotring Art Pen today, and I like the looseness that I get with the thicker line. Eventually I want to get some waterproof ink, but in the meantime there's plenty to explore with using a bit of water to add shading ( I was braver with this on the later sketches). 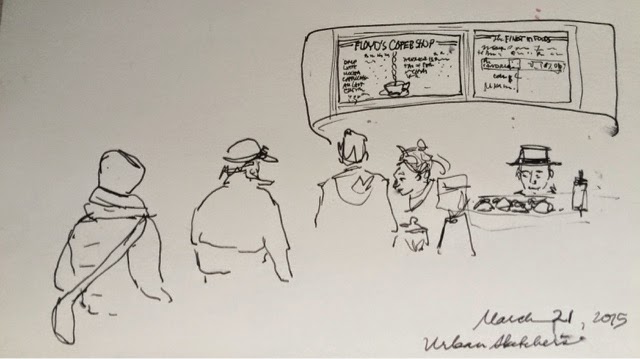 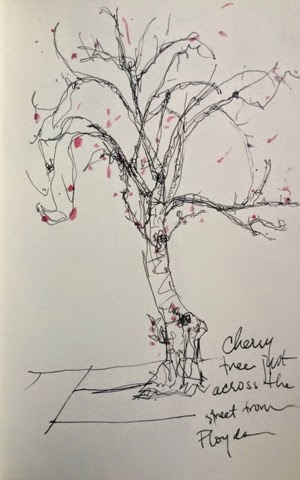 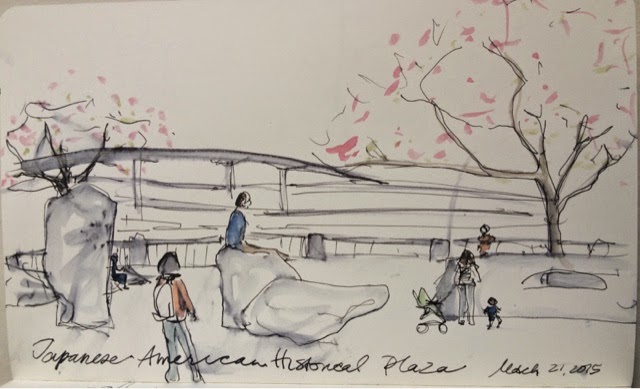 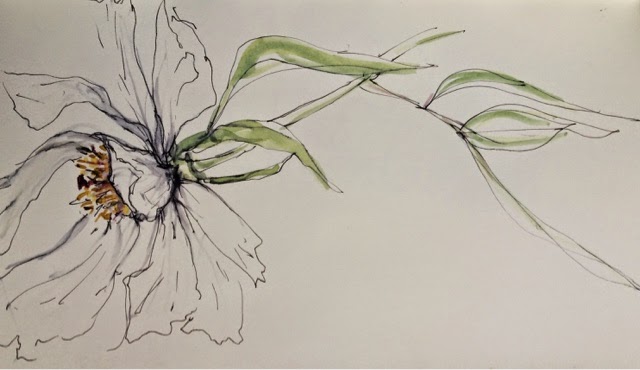 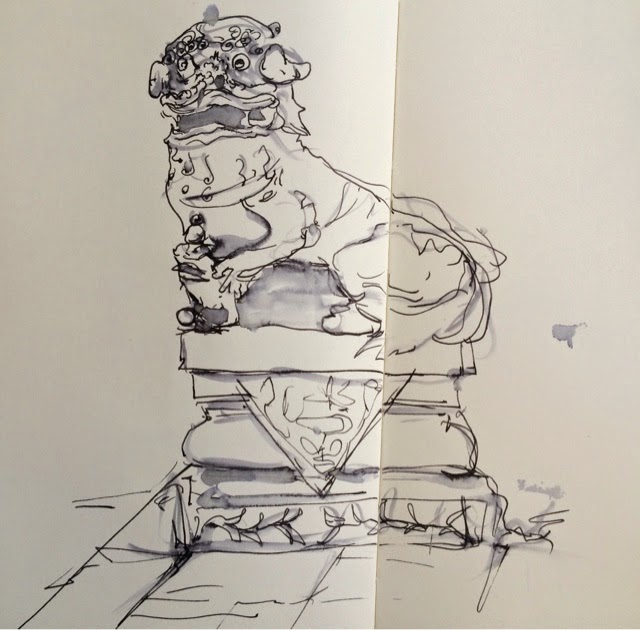 I drive by these painted ladies several times a week, always thinking I should give them a go.  The complicated details and the colors were a challenge for me to do loosely and not too "architectural."   I wanted them to look like a watercolor, not a building drawing. 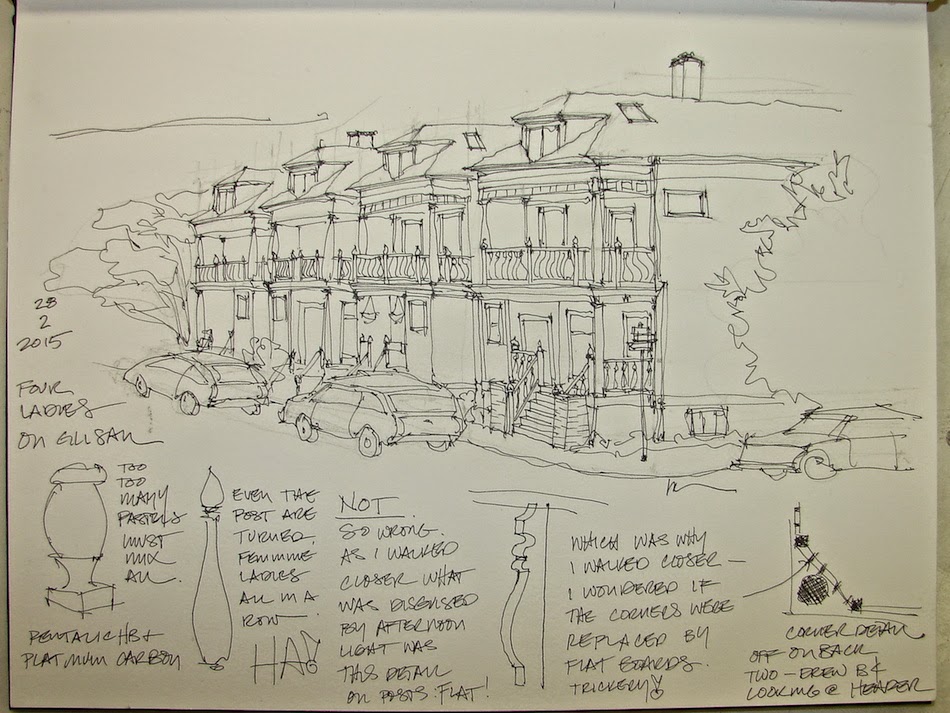 I stationed myself across the street.  I started with guidelines in pencil, and let go of a
two point perspective and let it be as if all the buildings were eye level as they go back.
If you enlarge the drawing you can see that I drew quite a few guidelines before
I began inking.  I was concerned primarily with giving a place for the details of the
houses to sit, and this lack of paying attention got me into a bit of trouble, below.

I admit I assumed that all the houses were the same except in color.  A LESSON IN LOOKING.  They are of two flipped designs, which I saw clearly as I began drawing details but too late.

Another surprise which I caught while drawing the details was the bannister posts.  Due to the sun and shadows at first they appeared to be turned posts, which I noted.  However, as I was drawing the first corners with the columns behind the angled bannister, I noticed that the posts may have been replaced, as they were not turned.  Then as I went a bit further I noticed they appeared board-flat on all the corners.  I walked over to look closely.  What appeared turned posts from afar were actually posts cut on one side only to give the illusion of turned posts, below -- a cost-saving measure, I am sure. 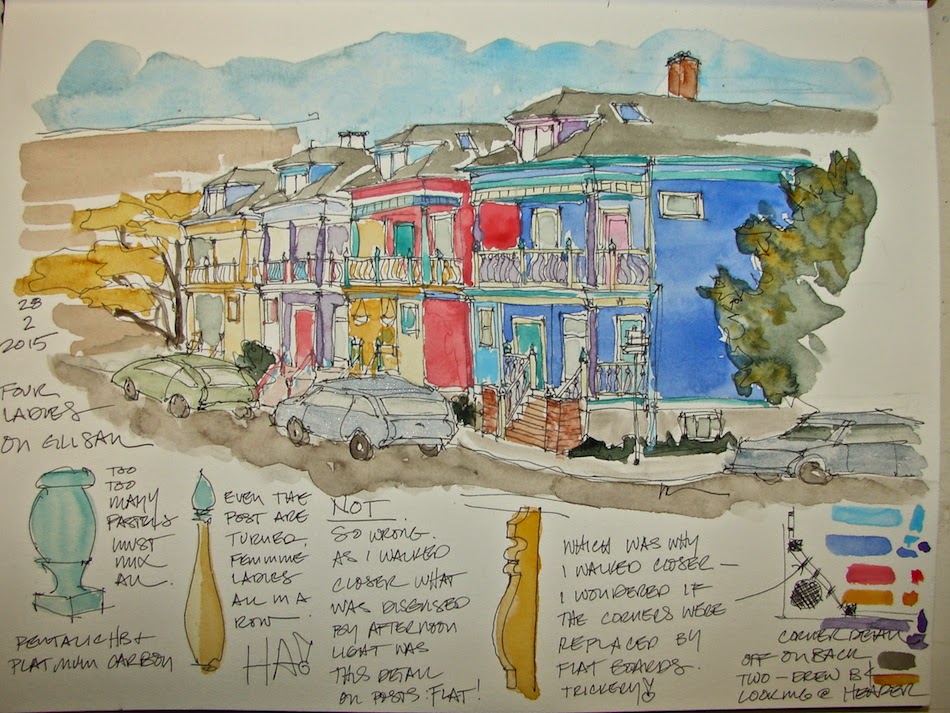 I mostly inked on site, then added watercolor in the studio.  I had to mix many colors.  I've been asked about adding watercolors to a good drawing and "ruining" it -- but this is my interest.  I can draw in several styles, and from any perspective: worm's eye, bird's eye, exploding axonometrics, you name it!  I was the go-to girl in the office for complicated inked drawings!  However, I am interested in learning watercolors, and so I do "ruin" the occasional drawing.  This one is a bit blotchy, and as I am finding styles and trying not to paint like a coloring book.  I choose when to let white paper show, and in both of these cases I was not always spot on.  I have learned not to try to go back in and correct -- I'll do this again sometime soon!  I am mostly happy with the outcome.

Posted by dkatiepowellart at 12:37 PM 3 comments:

This is a re-run of last year's Cherry Blossom sketching at Tom McCall Waterfront Park. Hopefully the cherry blossoms won't be already gone by then, but even if they are, we will still have Ankeny Fountain, Saturday Market, and Old Town/Chinatown nearby.  It's all so wonderful!
APRIL 18

In April, we'll head for the Hawthorne district where you can try to sketch a large variety of coffee shops on one street.
Stay tuned in case we need to change the meeting place if these locations can't fit all of us.

Took a walk and sketched in our studio’s neighborhood, buildings I look at all the time.
I was able to sketch both of them, and it was a bit like old times, architectural sketches.
They are both shades of grey: ESCO’s is a dove grey, and Rejuvenation's is a charcoal grey.
You can see the teeny swatches of the colors they actually are, above. 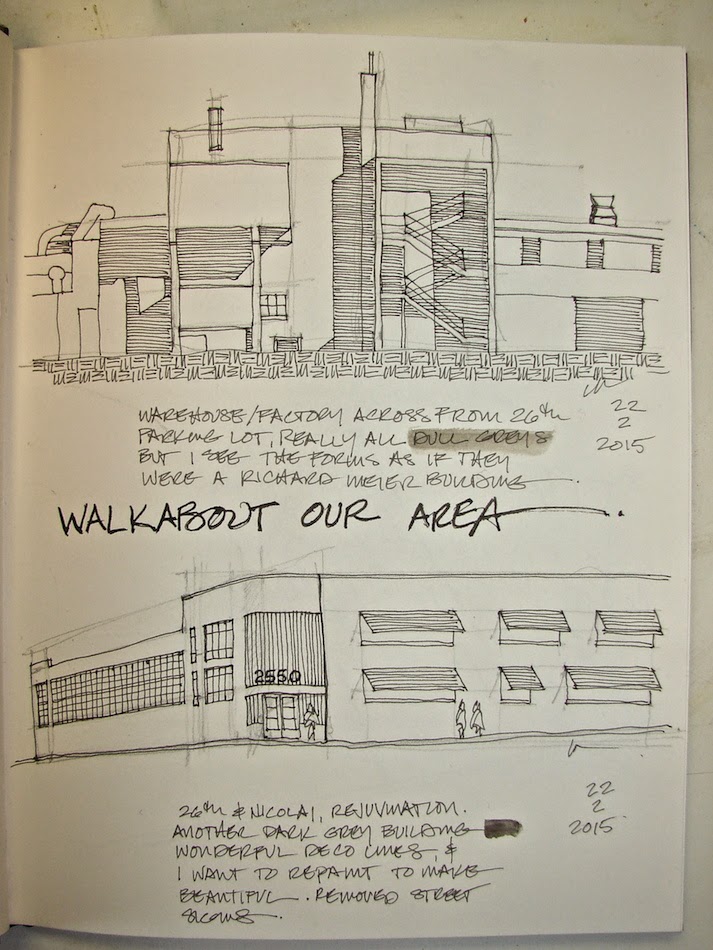 Because USk is about showing our world truthfully, I am not posting what I did with these grey buildings.  I painted them in Art Deco or Modern colors, for fun, and show the Photoshopped "grey" versions on my own blog site.  I want to paint many buildings in NW a different color!
Posted by dkatiepowellart at 3:34 PM 1 comment:

I’ve approached these buildings at 17th and David , which are part of the St. Mary’s Cathedral of the Immaculate Conception complex, dozens of times.  Needing a break from our business bidding I stole away to sit in the car (easier to lay watercolors out) and do two sketches.  It was nice to be able to see the buildings without the tree leaves! 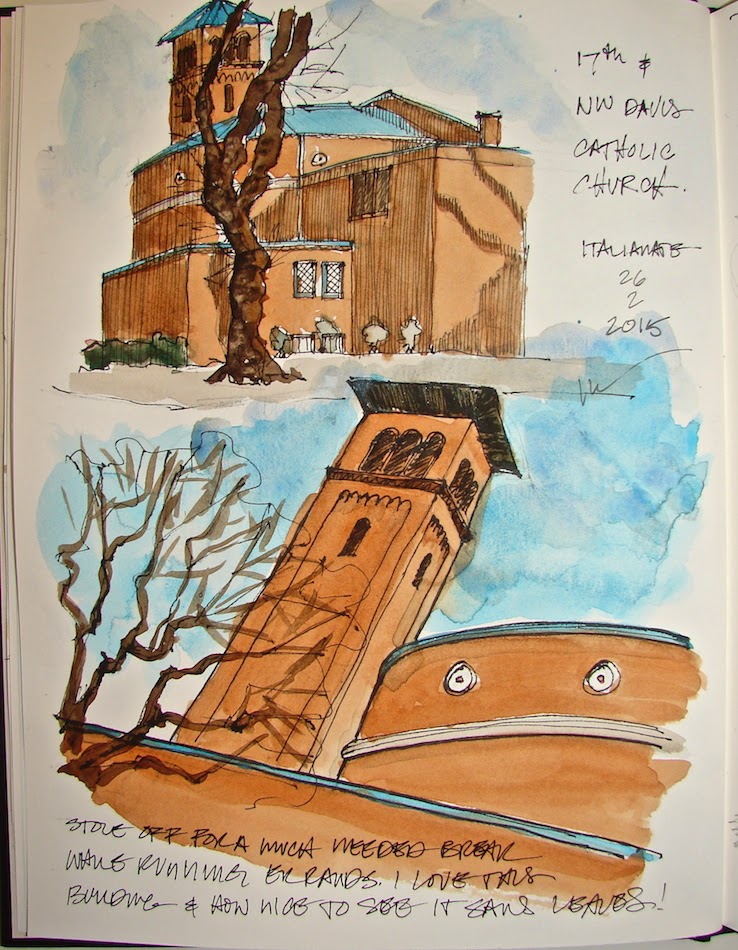 Next time I will take the time to tackle the brickwork texture; almost no time this round.

I admit to having never seen the church entrance, as I like the tower and the round shape of the building next to it.  A little bit of Italy in Oregon . . .

I couldn't resist going out to the Japanese Memorial Garden this past gorgeous, warm (although not so much in the shade in the morning) Saturday. Vicky joined me in sketching the not quite out blossoms on the Cherry trees there. 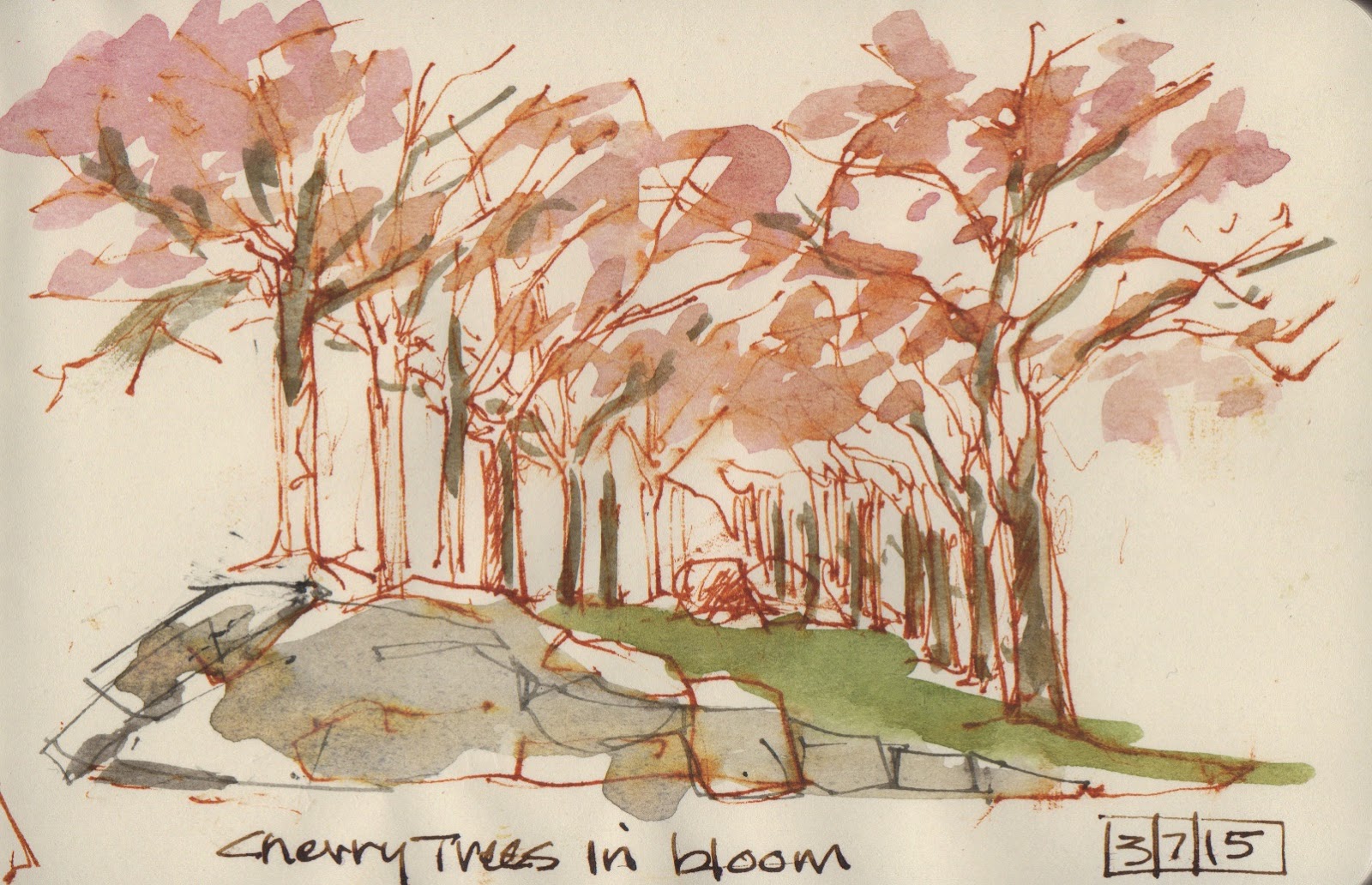 First I did this thumbnail above and then the real attempt to capture the essence of the blooms...some still in bud and some in that beautiful pale pink.

I then turned around to look back toward the Burnside Bridge. In this view the trees blooms turned a rusty cinnamon color against the bridge background.


All in all Vicky and I had a very productive day. You can see my other sketches from this day on my blog. www.reason2draw.blogspot.com
Posted by deb rossi at 2:58 PM 4 comments:


This past Friday was a great day for sketching the new station.  An added bonus was a tour of this brand new Station 21. With spectacular architectural details outside the inside is spartan as you would expect in this functional space. However the art budget was generous so there are some really special pieces inside and out.

Delighted that both Deb and Angelika could make it out for our impromptu sketching adventure at the grand re-opening of Fire Station 21 today! Not only did the station provide cake to celebrate, but they gave tours through whole facility--rather spartan but also quite modern and sleek at the same time. (And man, I would love to have that river-front view from their kitchen windows.) 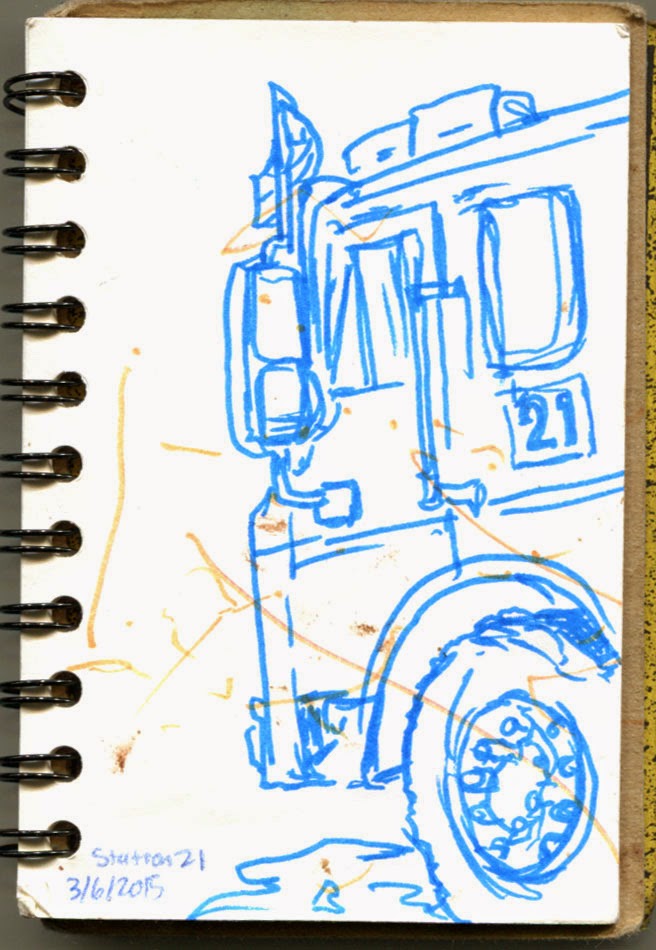 I got this quick sketch in while the kiddo was thoroughly distracted by her slice of chocolate cake. I did the blue lines, and she contributed the red scribbles afterwards. I think I am starting to get the hang of our collaborative approach to sketching...