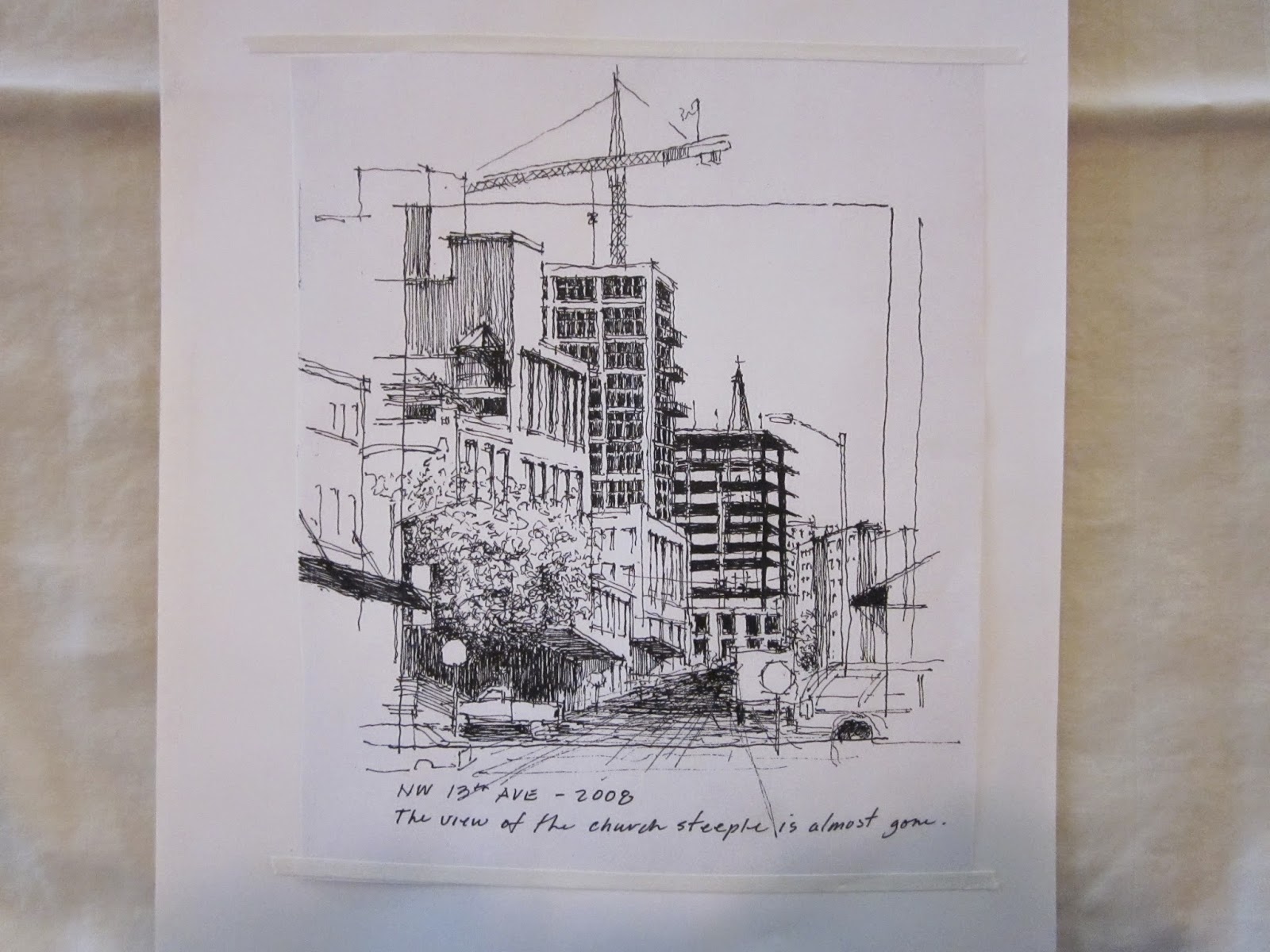 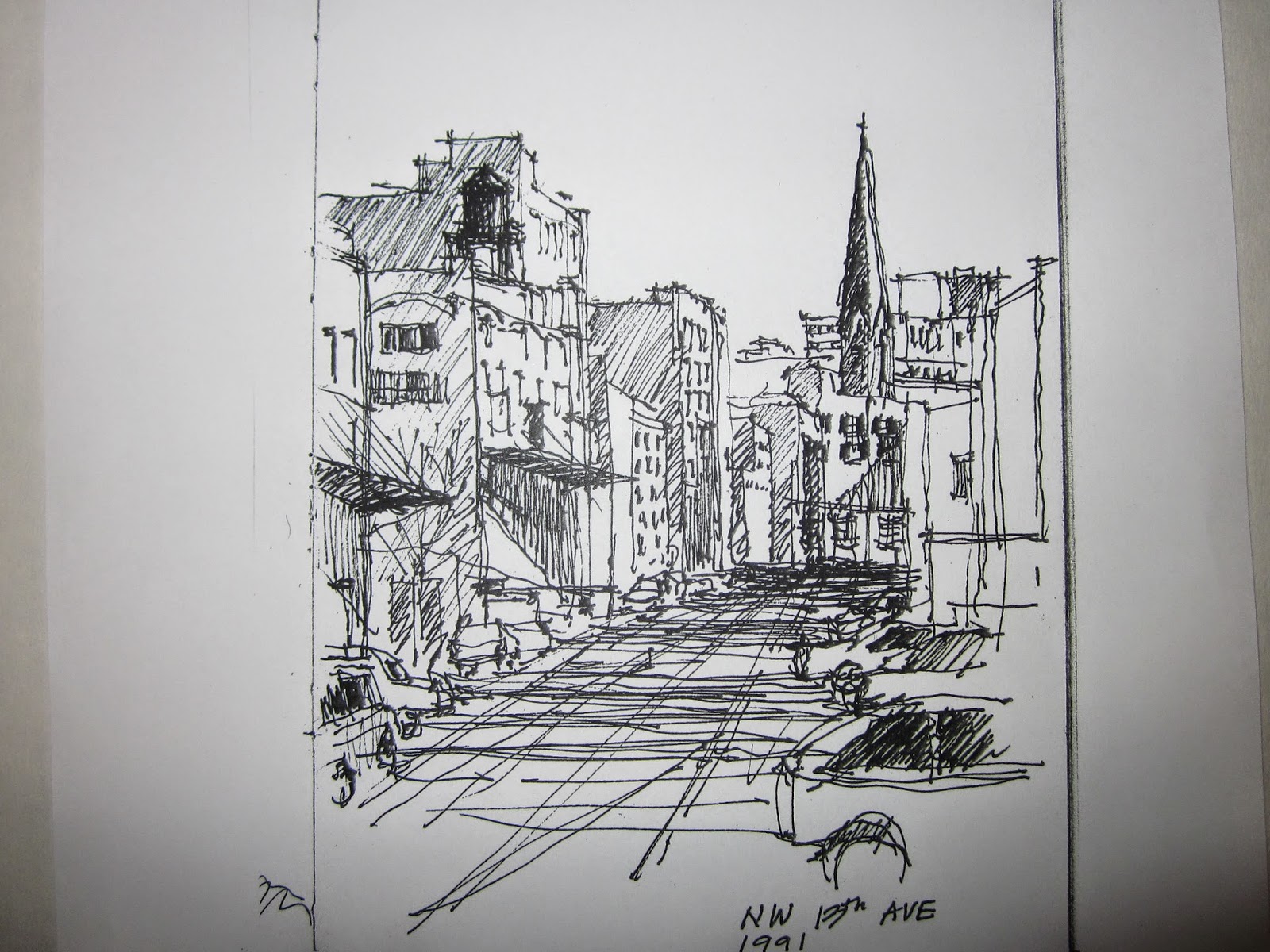 This is my first try at posting sketches.  The sketches were done looking down NW 13th at Hoyt done 17 years apart.
Posted by Gregg at 8:16 AM 2 comments:

Extra, Extra, Read All About It!

The Oregonian wrote up a nice article about the upcoming 2nd Annual Urban Sketchers Sketchcrawl! Check it out: 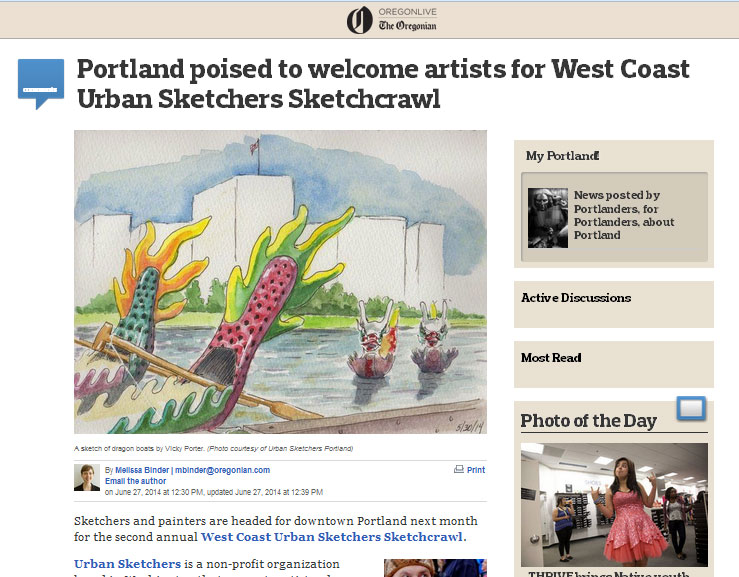 Director Park and Drink and Draw

These big chess pieces are fun to draw. 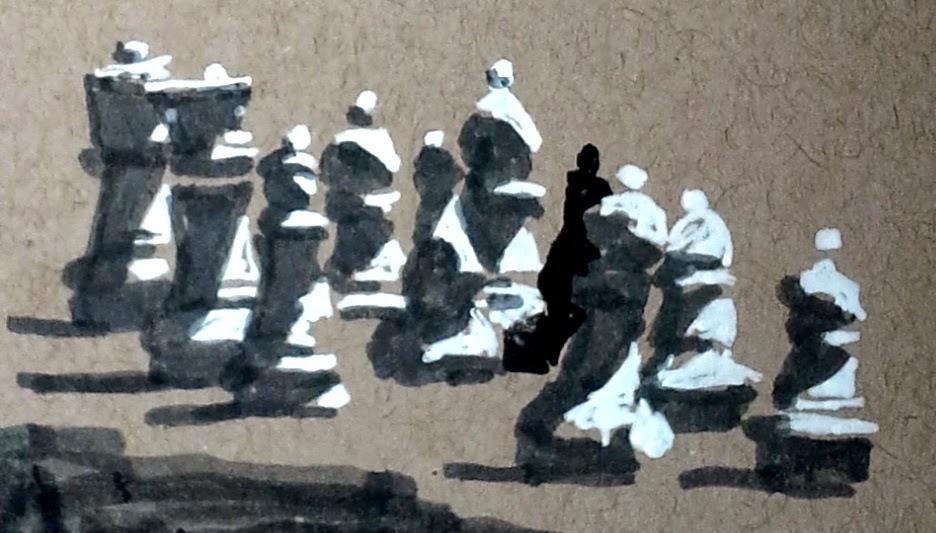 The building under construction doesn't look that big when there's all these trees around. 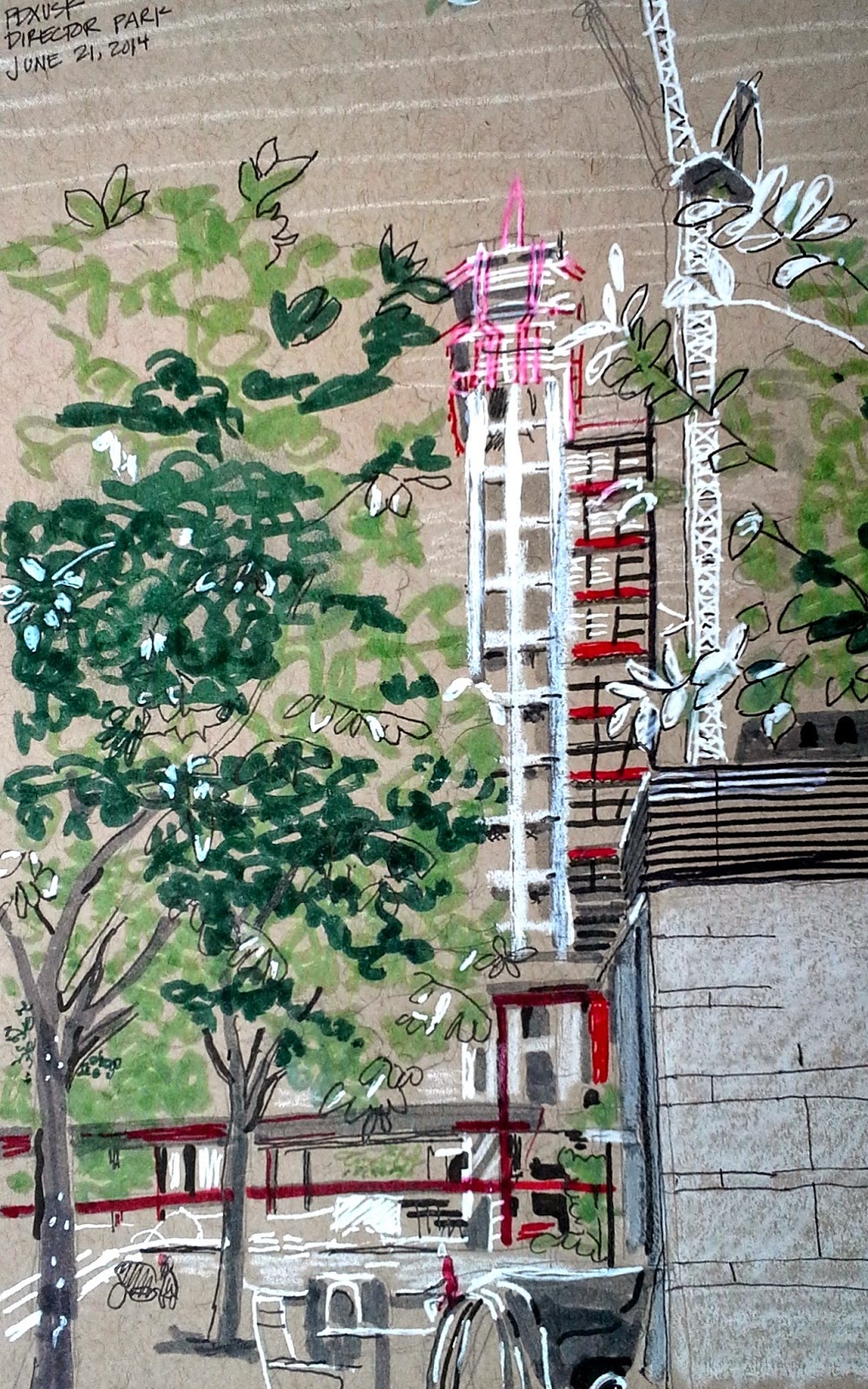 This is a sketch from the Portland Art Museum 2nd floor. 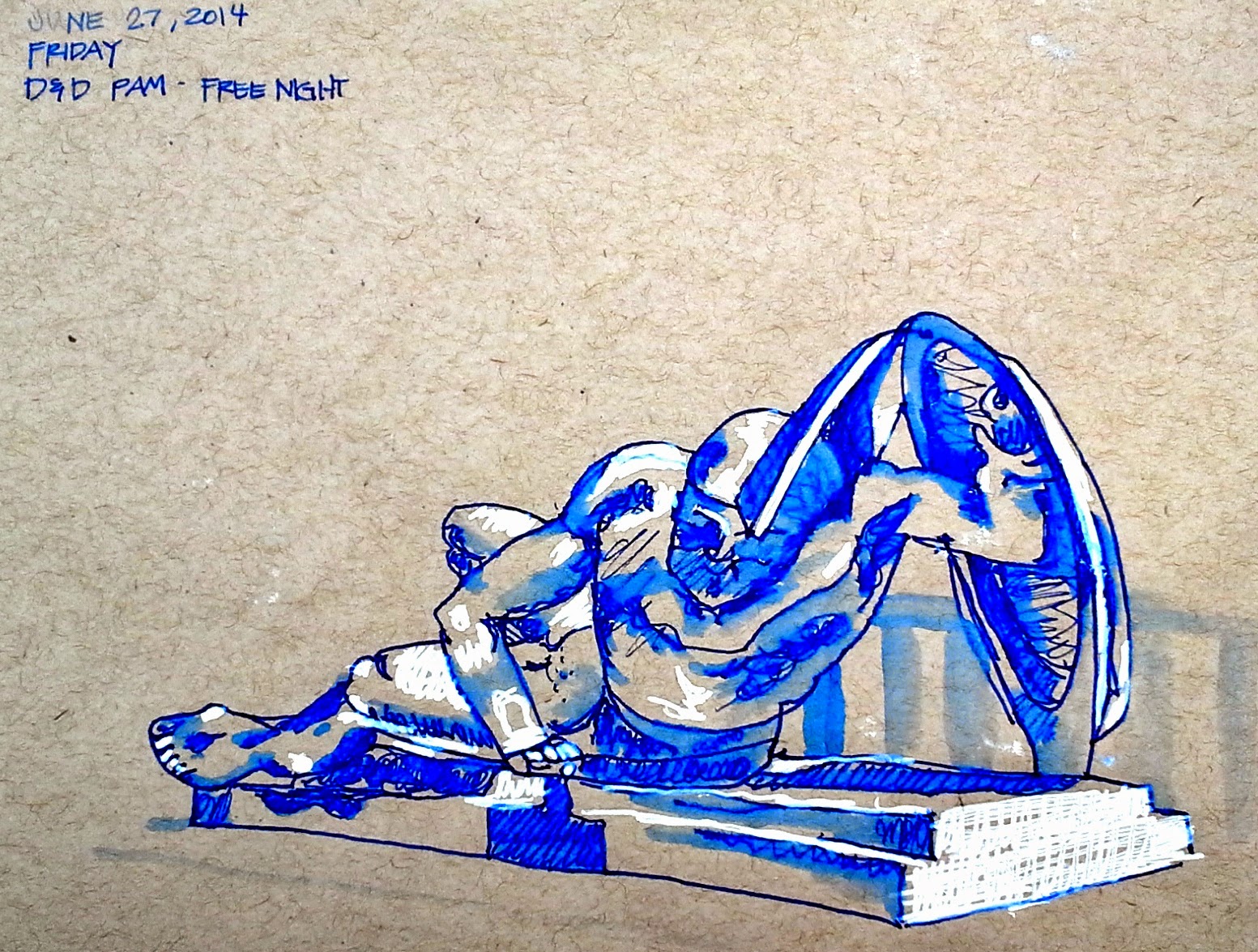 I'm making my way through all the sculptures I can catch from sitting on a bench.  Forgot my stool - whoopsie. 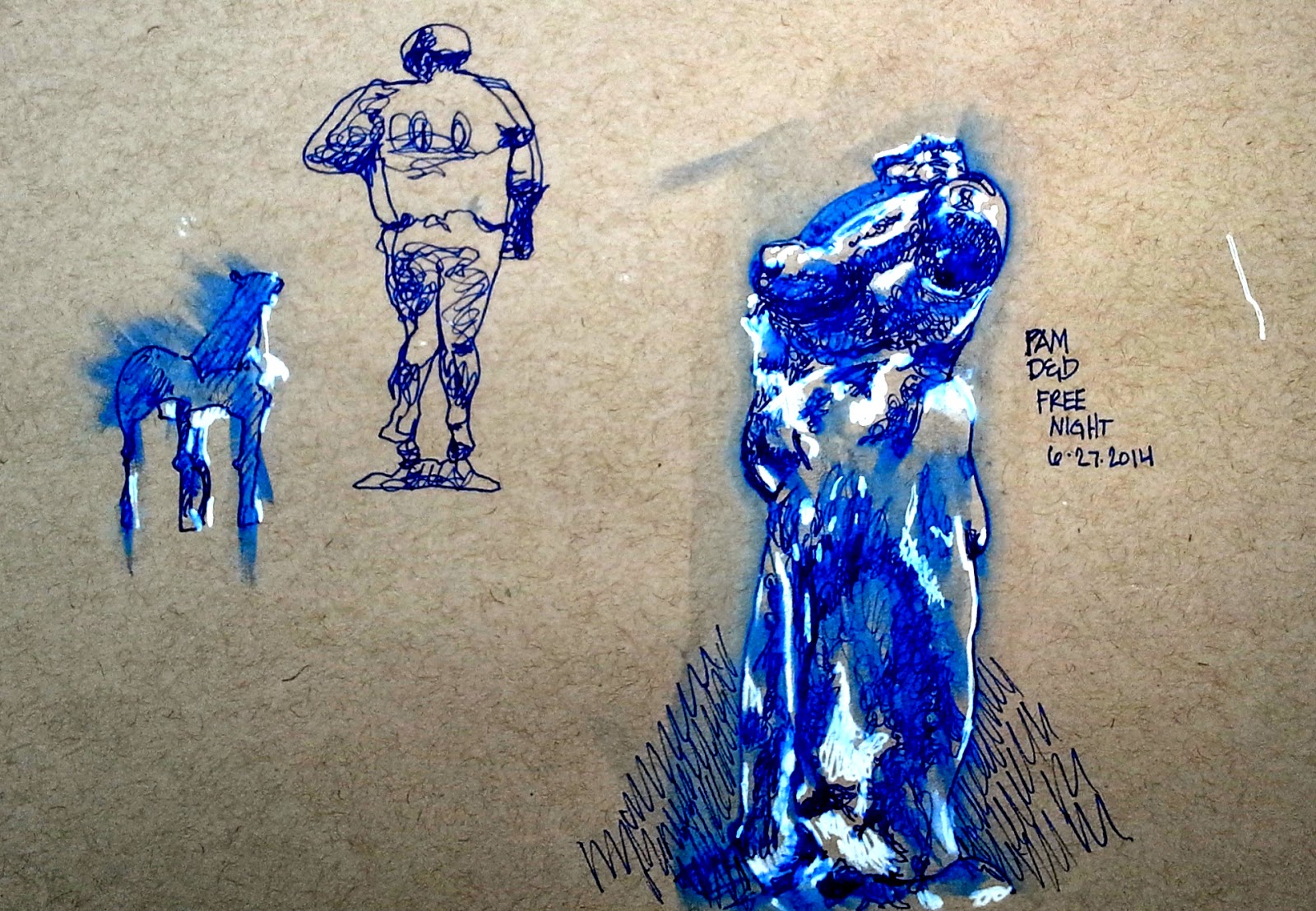 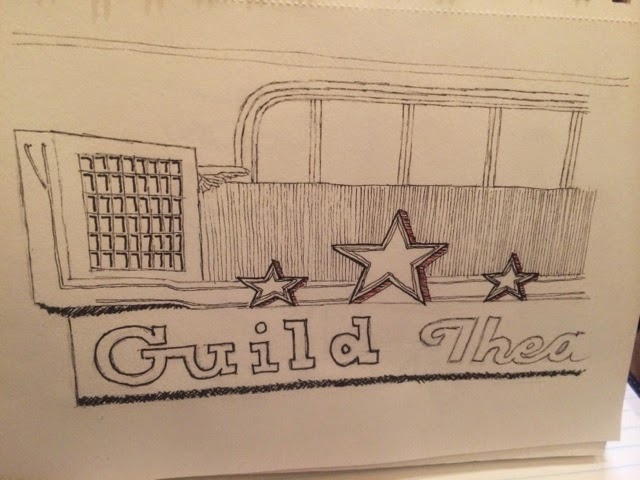 A couple of pencil sketches from the Milwaukie sketchcrawl. 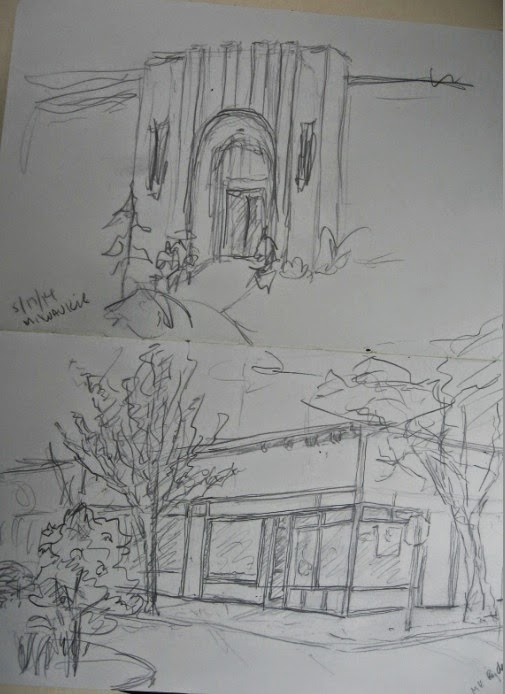 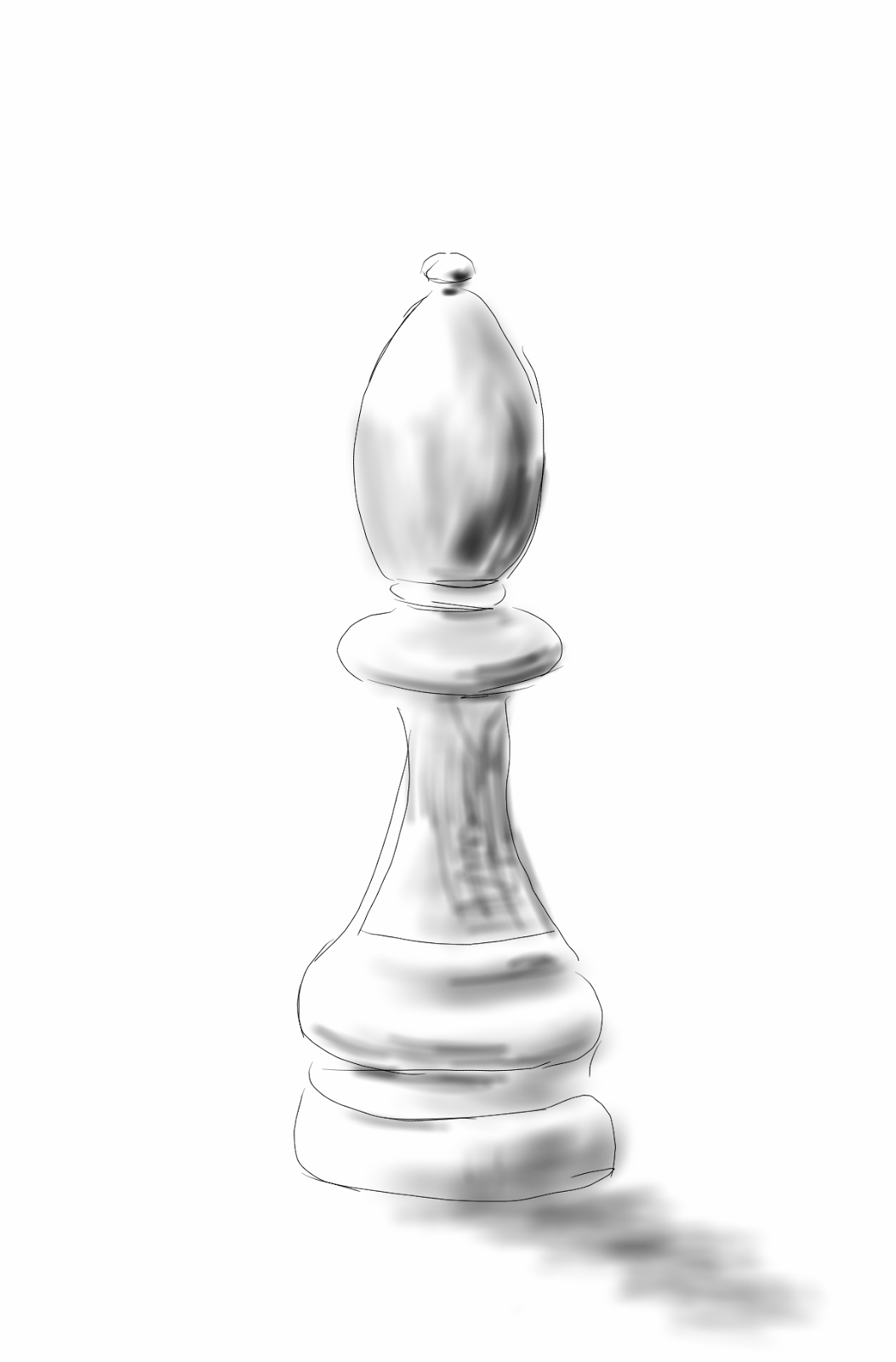 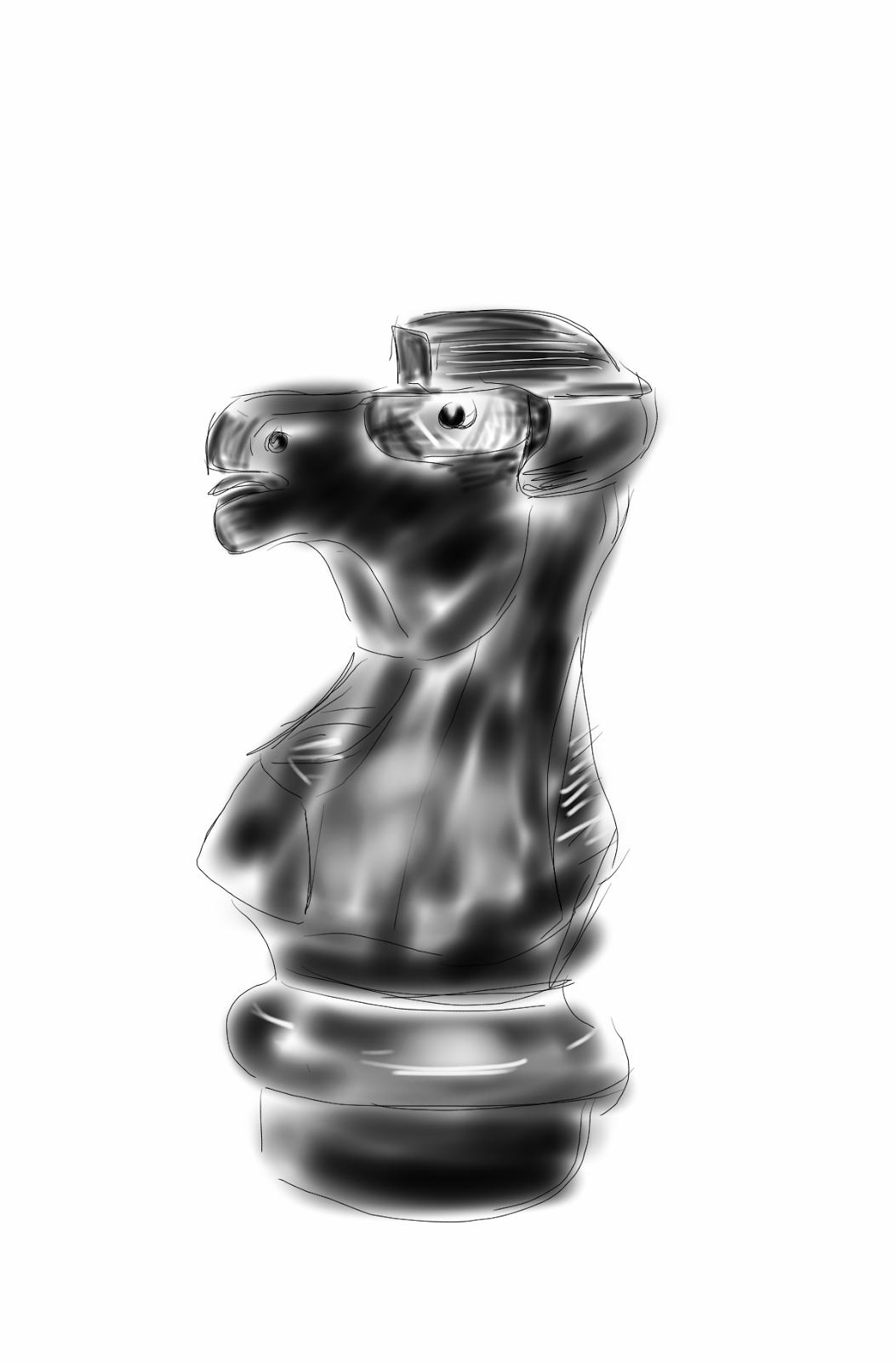 On Saturday approximately 20 sketchers (old timers, newcomers, and everything in between) showed up at Case Study cafe in downtown Portland, which happens to be one of my favorite cafes.  Kay filled us in regarding her great experiences participating in Sketchbook Skool and I showed off the sample Arm-adillo pencil cuff I'd received from Muse Art + Design. After fortifying ourselves with beverages we ambled down to Director Park.

The forecast was sunny skies and warm temperatures but when we arrived it was grey and slightly chilly, which - in the context of an urban park that is mostly made up of gray concrete to start with - was not very inspiring. Anyway, I'd been wanting to sketch the Guild Theatre for a long time; my first attempts years before had gone terribly awry. 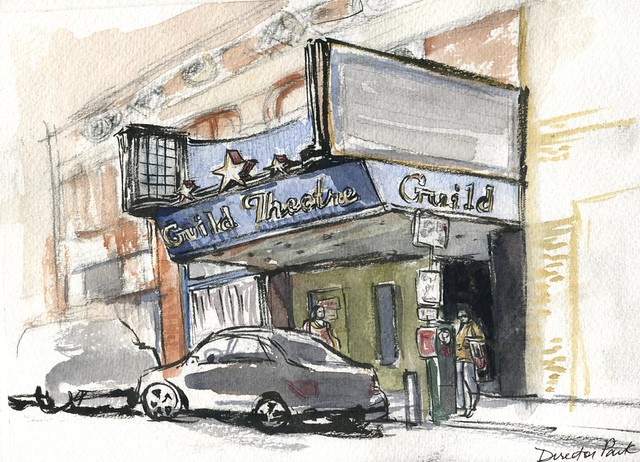 The Guild Theatre opened in 1927 as Taylor Street Theatre, acquiring its current name in 1947, and it's the last single-screen theatre in downtown Portland. Unfortunately, it's been closed for years. It's another of those lovely older buildings that doesn't have any obvious way forward, since redeveloping it and adding bathrooms (its old bathrooms got reassigned to the pasta restaurant next door) would cost so much that the owners haven't been able to cut a good deal on the space yet.  I expect one day as the economy picks up and space becomes more valuable a deal will be made, and inevitably this lovely old signage will disappear from the face of Portland.  I'm glad to have had an opportunity to sketch it while we still have it.

After taking a break to visit the farmer's market for fresh berries and basil, I came back to find the sun had come out and many of the sketchers were lined up on benches near the giant chess board. 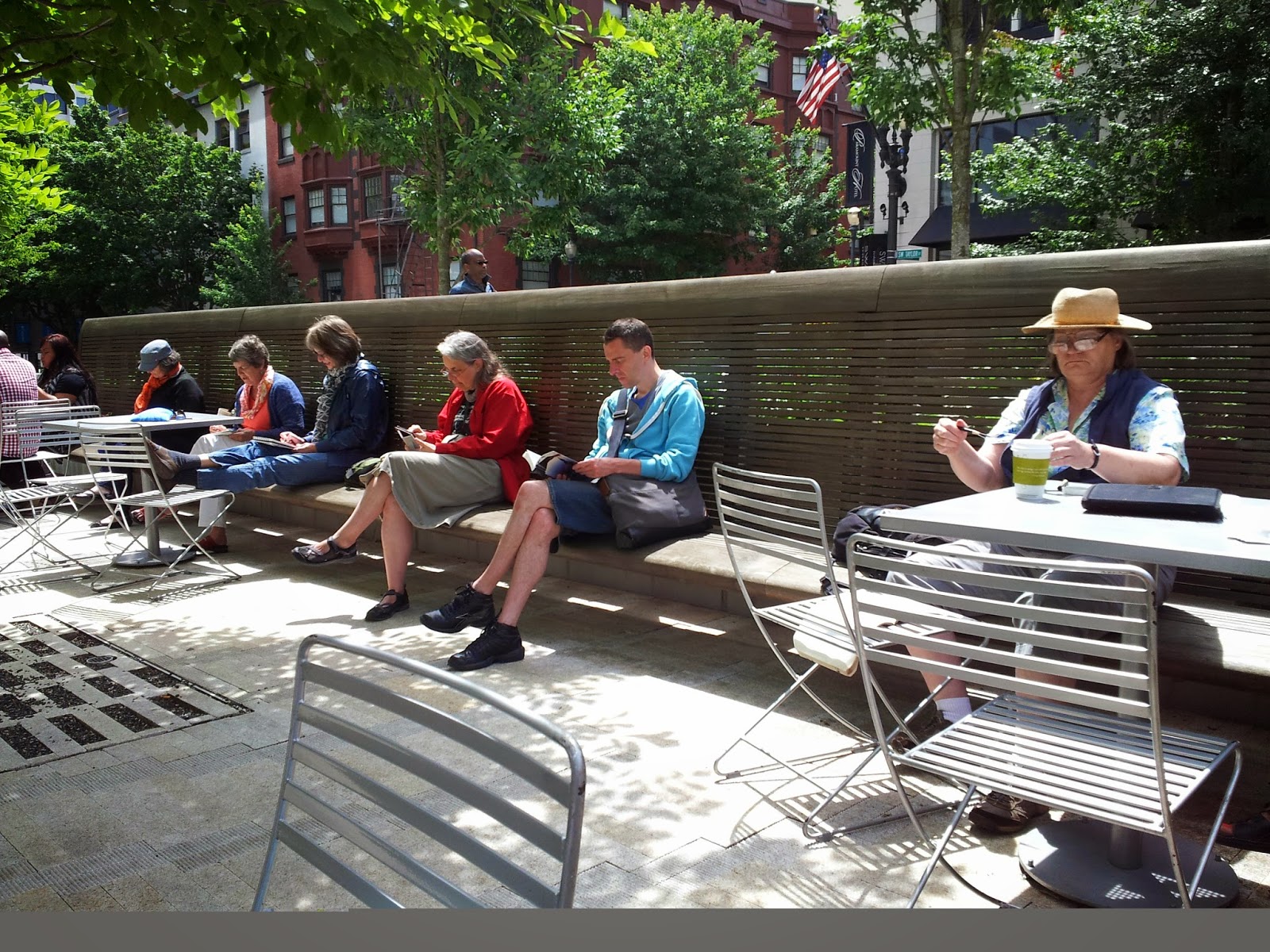 I sketched a few of them very quickly before we were to gather for lunch... 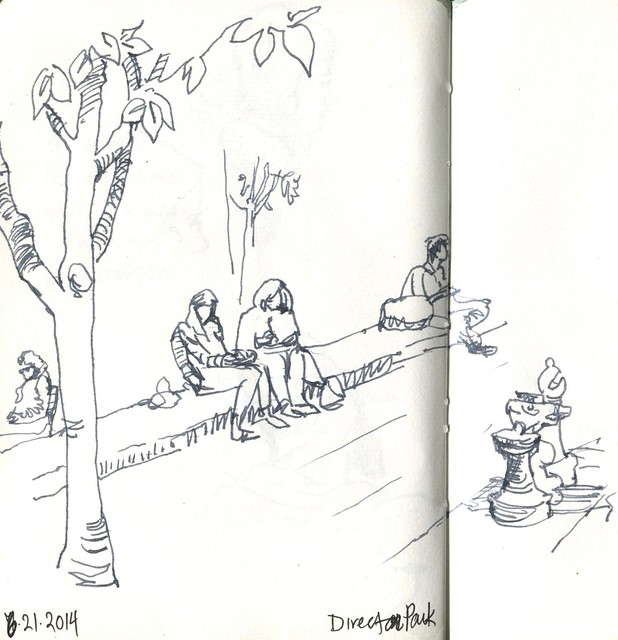 I'm really pleased with the participation we've been getting lately.  I've met quite a few wonderful people through Portland Urban Sketchers in the last year alone, have browsed many an inspiring sketchbook, and have shared tips and tricks and joys and woes with a lot of kindred artists. Thanks everyone!

Sketching/art opportunities this weekend and next week

Tuesday, June 24
6:30pm: Golden Artist Colors demo at Muse
Muse is offering a Golden paints demo to include a new watercolor, QoR, which purportedly offers "five times more pigment than traditional watercolors".  The demo requires RSVP and costs $10 but that fee goes towards any art supplies purchase made at Muse in the following week and there will be free samples.

We've scheduled an Urban Sketcher blogging workshop for Sunday, June 29, 11am.  We will help you get set up to share your work here at the Portland Urban Sketchers blog and also to share your images online in general. We have announced the location to our mailing list.  If you want to attend but are not on the mailing list and have attended at least one sketchcrawl or are meaning to do that soon, please email pdxusk@gmail.com for further information, you'd be welcome to join us.

Do you know of more events coming up this week? Let us know in the comments!
Posted by Portland Urban Sketchers at 9:44 AM No comments:

This was my first sketch after returning from vacation.
I think this is one of the prettiest displays they have had in the square.
For future reference,the Starbucks outside deck has a perfect view! 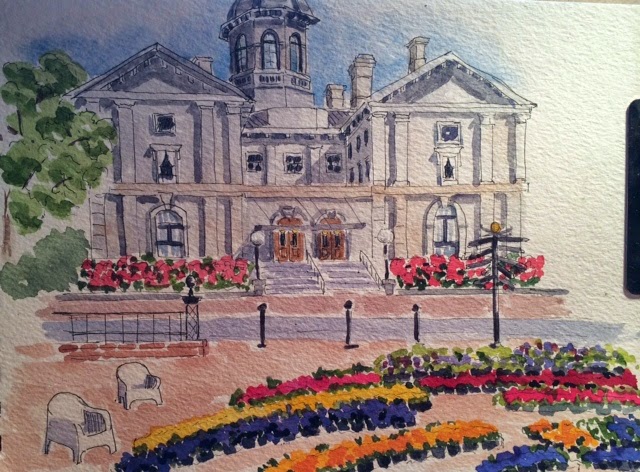 Posted by Dailysketches at 5:26 PM 3 comments:

Join us Saturday, June 21 (the summer solstice!) for sketching in Director Park at SW Park and SW Yamhill.  There are many drawing options around there including the new skyscraper that's under construction on the neighboring block.  Hope to see you! 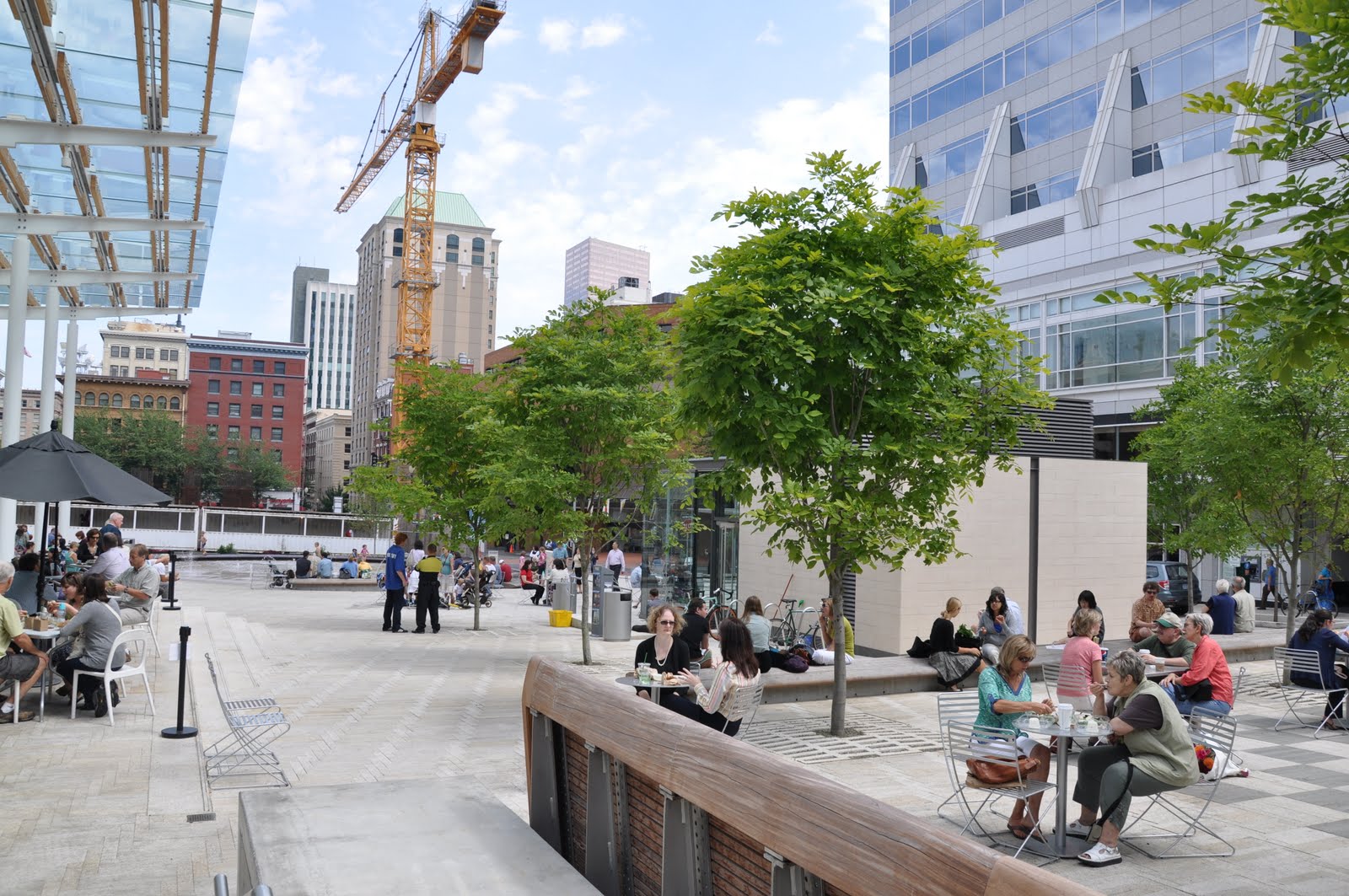 Portland to Seattle, Dock to Downtown, River to Ranch

In early May I took Bolt Bus to Seattle where the kind and excellent Red Harp escorted me to MOHAI to see Gabi's amazing show and meet up with Gail Wong and other Pacific Northwestern sketchers. Deb later joined us (she posted her sketches and notes from the day a few weeks ago).  It was great to see some familiar faces and catch up with Gabi after not having seen him since Santo Domingo.

The first sketch came out a bit abstract, in part because of the challenge posed by that massive red ship hull next to a mess of ropes and railings. The figureheads and lanterns and jug were sketched inside MOHAI's exhibit hall. 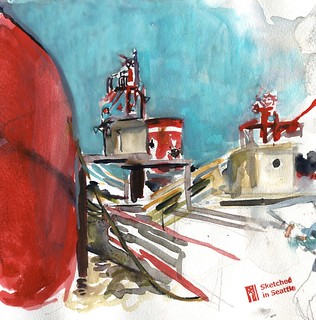 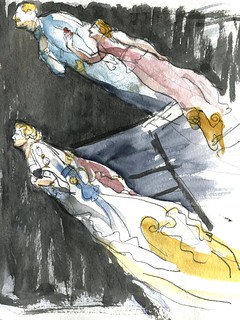 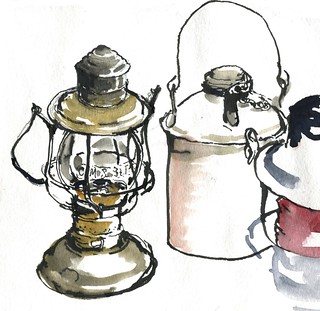 After lunch, we spent a lot of time admiring Gabi's exhibit, which includes space for sketching from the windows and we soon settled in to make use of that. My first sketch below captures esteemed colleagues Gail Wong and Frank Ching. 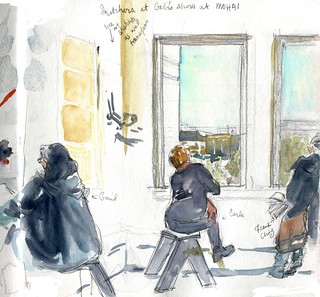 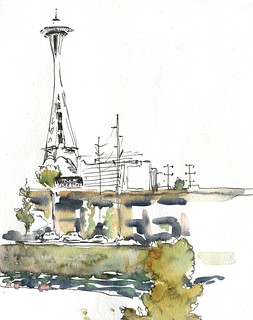 See Redharp's post to Seattle Urban Sketchers for more views of the day!


Then on May 17, the Portland sketchers met up for a sketchcrawl in Downtown Milwaukie. The Avalon Theatre and nickel arcade caught my eye with its bright yellow and red 5 cent posters. 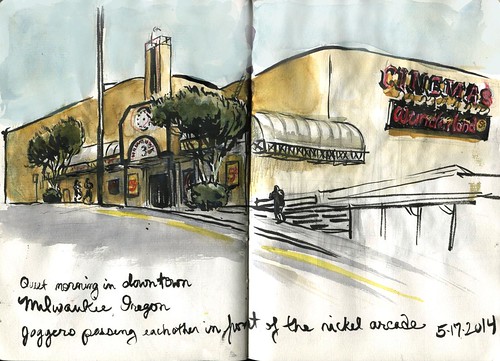 Next I sketched the library which was situated under a magnificent, richly toned tree. 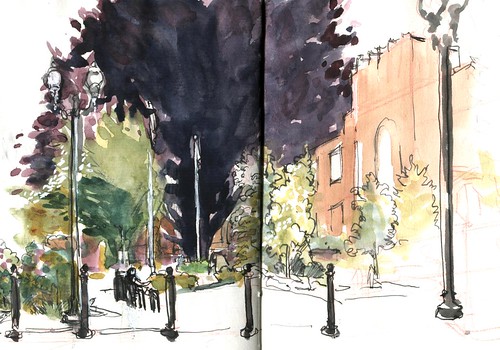 The week after that we had a visitor, sumi artist and painter Yuming Zhu who is based east of Seattle. I had attended his sumi workshop in April and was delighted to discover he's not only a sketcher with a strong urban sketching habit, he's also friends with Urban Sketcher Don Colley, and a friendly and creative person. I invited him to join us for sketching whenever he's in town, and in late May we got our chance!  A few of us Portland Urban Sketchers met up with him and visited the Eastside Esplanade, where we sketched from right down on the water. 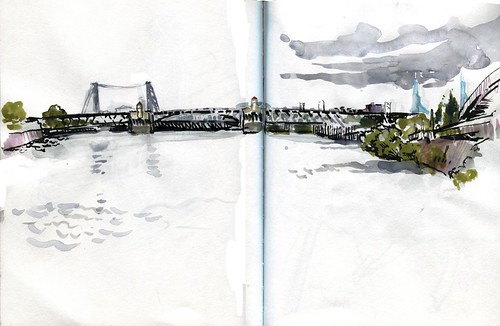 Next we moved up onto the Esplanade proper, and this view where the walkway passes under the Morrison Bridge seemed like a great opportunity to play with water soluble graphite. 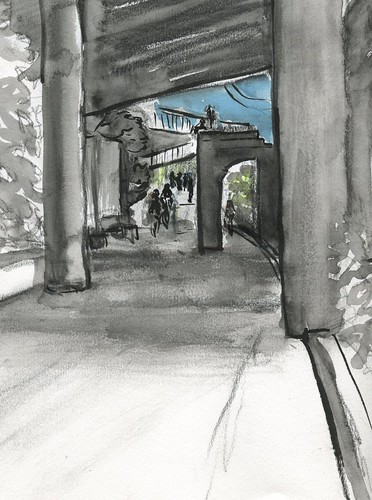 Yuming's style with a Pentel Pocket Brush appeals to me a lot, and as we head into the summer, you can bet I'll be experimenting with how I move my brush and how my line can capture my body's motion and make it part of the thing I am sketching.


Last year some good friends finally achieved their long-time dream of owning a farm. It's in Ridgefield, Washington, and on a recent Friday after work I hopped on a bus and set out to visit them there for the first time. 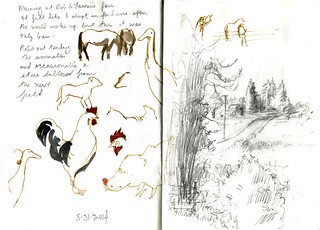 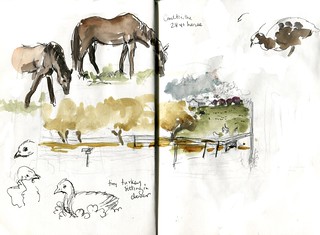 They have a massive 28 year old horse, and an old horse-drawn carriage that they sometimes pile into as a family (with their three kids). The other horse is very talkative, as is the rooster. Their ducks are of a variety that is surprisingly vertical - Indian Runner ducks, if memory serves. There were also chickens and fledgling turkeys. I tried to sketch my friends' youngest son but he got interested in my brush pens so we had some play time instead. ("It's like paint!" he exclaimed with surprise, delighting in the deep black of the ink from a Pentel standard brush pen). It was a lovely visit. 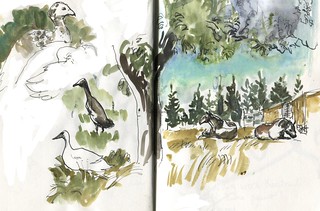 The two horses here are actually the same horse; he kept rolling around in the grass and kicking his legs out, seemingly frolicking just as a dog might.

Before putting together this post, I had been thinking I didn't get out much in May...
Posted by Portland Urban Sketchers at 1:50 PM 6 comments:

When it's Rose Festival time, it's always fun to see the dragon boats... 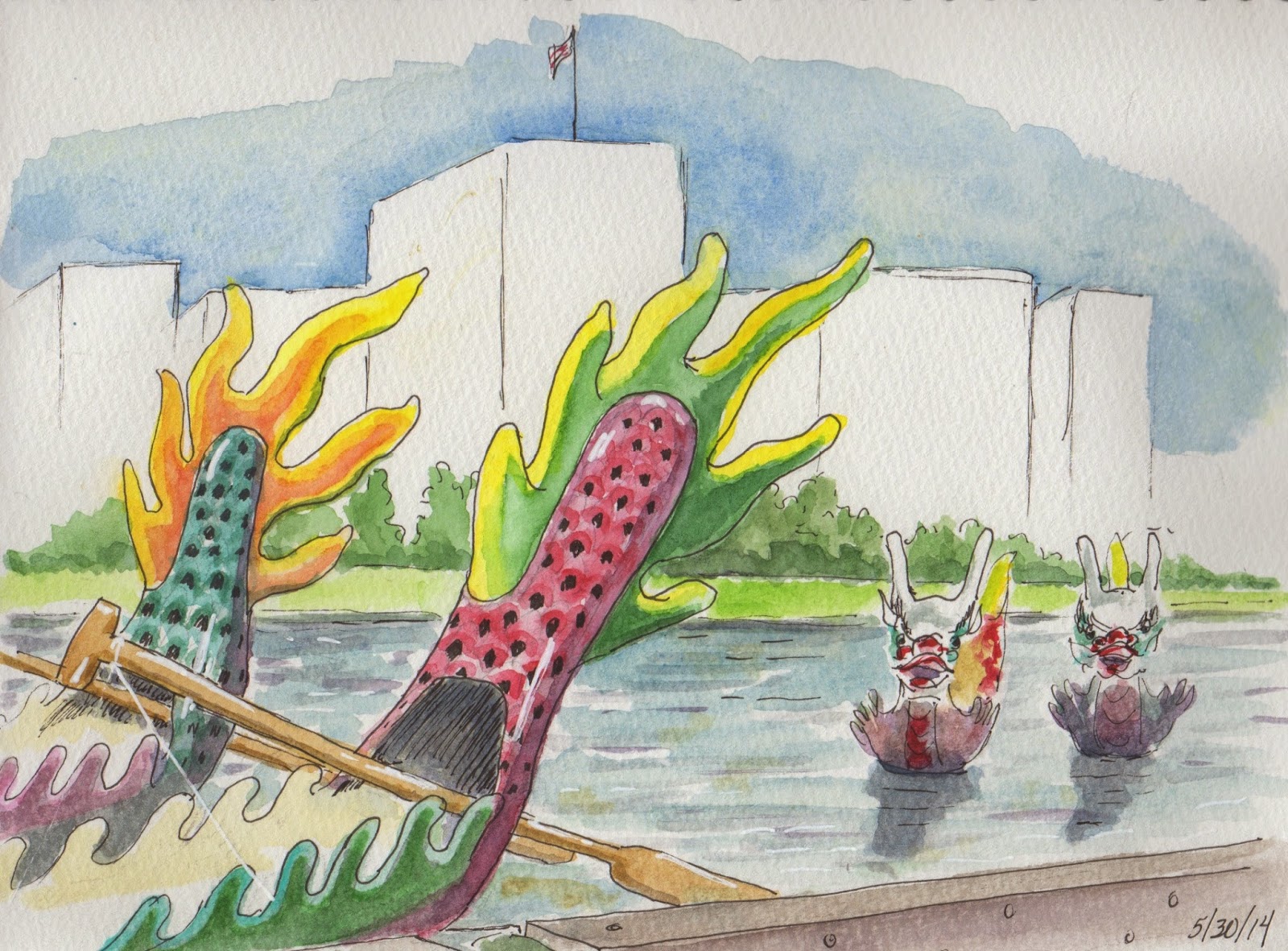 and the Festival of Flowers at Pioneer Courthouse Square... 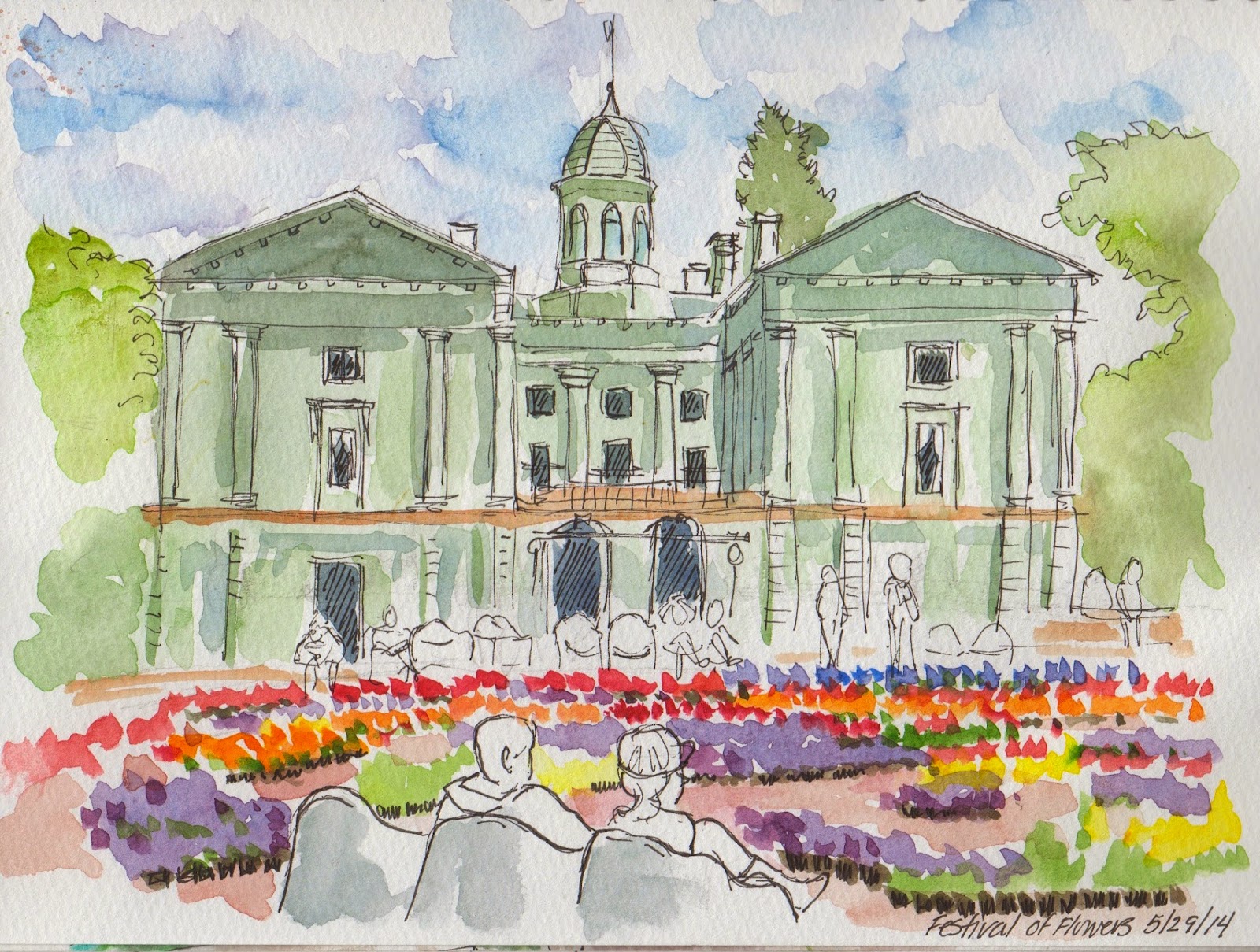