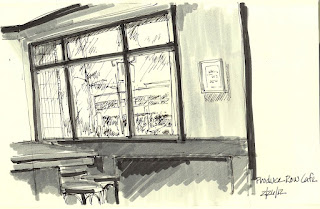 On Sunday four of us met at the Produce Row Cafe. I always like to be able to do some outside drawings but it was so cozy and comfortable that I stayed in to draw these interior views. Oh... and BTW the food was excellent! Alanna brought her copy of Gabi's 'Urban Sketching' book and I drooled over that (not literally) for a time too. 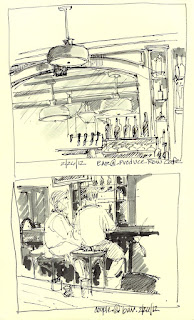 I have used both Noodlers Black & Lexington Grey and my big Pitt pens to get a some depth and tone in the drawings and on the whole am pleased with the results.
Posted by deb rossi at 6:29 PM 2 comments:

Met up this afternoon at the Great Harvest Bread Co and had a lovely time sketching loaves and chatting with Vicky and Alanna. 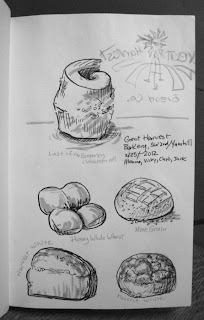 When the time was ripe, we migrated to the Hawthorne Bridge to catch the Urban Iditarod, a spoof sled-dog race where 100 teams of people dress in absurd costumes and push decorated shopping carts through the city, pouring into downtown. It was fun to see quite a few groups of people huddling around the bridge and the bike path, trying to stay out of the drizzle, eagerly anticipating a cascade of craziness. 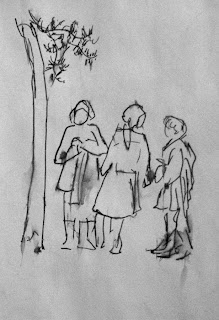 It would have been a difficult task to draw the race as it came pouring by--I've never seen a disco hot-tub on wheels moving so fast, nor so many people dressed like Mario Brothers running past (I think there were something like 20 Marios among the roughly 500 participants). We just laughed our heads off, and gave high-fives to the folks dressed like TSA agents, square dancers, and "The 1%."

But I did follow the race for a short distance, where they stopped for a gigantic dance party outside of an Irish Pub. So, even though these sketches are pretty runny with drizzle and can't catch the full degree of chaos and magic of the event, it's a tiny glimpse of some of the costumed creativity. 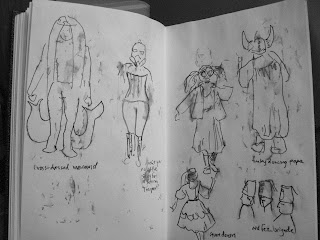 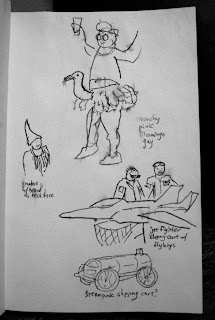 My favorite element of all, hands-down, was the shopping cart that had a pulpit built on top of it, with a the funky dancing Pope giving his groovy blessings to all those present. I had no idea that the Pope was such a good dancer! 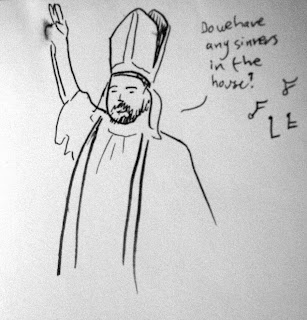 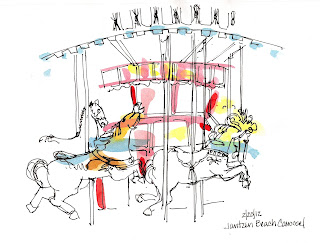 I have to say this was a pretty good sketching opportunity and lots of fun. Not exactly an easy session but there was so much to take in and lots of things to draw. The carousel horses were a fantastic and the structure in itself was very over the top...mirrors and lights and bright colors! 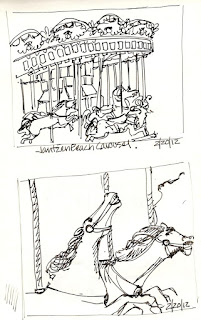 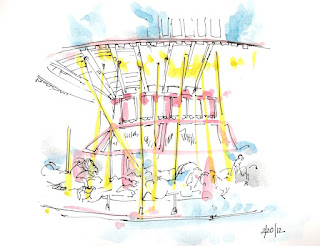 I got there a little early so be sure to have some time before the Carousel got started.  I started in Pencil but went back to Pen and Ink Wash for most of the outing. 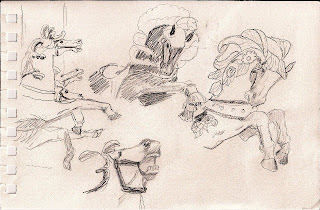 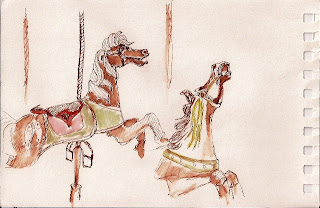 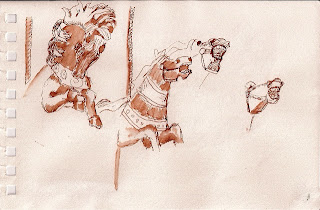 I decided to try using Sketchbook Pro for our sketch session at "My Chai Te" in the Sellwood neighborhood. I think what I liked best about using this program was it made me draw with a more relaxed feeling. I just had fun. 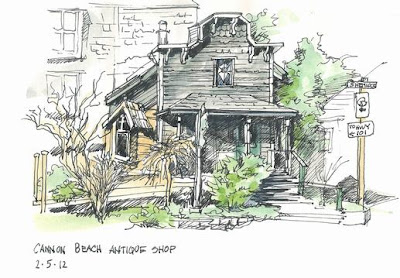 I stayed at Cannon Beach over the weekend ( along with my hubby and our dog) and finally got to do at least one sketch of one of the many charming buildings that inhabit the town! It was such a great weekend, weather-wise, that we spent a lot of time just walking on the beach. There are a lot more funky houses and shops to sketch but my dog had other plans!

Even though our group is called 'urban sketchers'....I think a day trip to this coastal town might be a fun excursion someday. We could picnic on the beach and come home with lots of interesting sketches. Just sit on a bench in town for a few minutes and you see dozens of dogs and their owners...more perfect subjects!

Hopefully, there will be other perfect weekends ahead....Linda E
Posted by Linda at 4:21 PM 1 comment: