Saturday, April 12 - Crystal Springs Rhododendron Garden
(Note that this is the 2nd Saturday of the month.)

The Rhododendron Garden should be beautiful in the next couple of weeks. Let's go draw some flowers, bridges, trees, and other lovely things. Maybe ducks and swans too. Hope to see you there!

Cost: $4 for entry to the Crystal Springs Rhododendron Garden. Plus any food or drinks you want to buy at First Cup or Laughing Planet.

Keeping with the southeast theme, let's go to historic downtown Milwaukie in May. Posted by Andrea at 8:56 PM No comments:

On one of our first comfortably pleasant spring mornings, Portland Urban Sketchers joined up with one of our favorite repeat visitors Laura Frankstone to sketch cherry blossoms along the Waterfront.  I finished the last pages of my Canson sketchbook, working with pink ink and fountain pens and brushes...

Next I started into a watercolor sketchbook,  and it's taking a bit of work to get used to watercolor paper again after filling a Canson book; watercolor paper is just an entirely different beast. In this sketch, I tried to capture the two different paths existing next to each other: the road into daylight, and the shady path below the trees. You take the high road, and I'll take the low road.


As usual I attended the regular Dr. Sketchy figure drawing session, which this month had a theme of H.P. Lovecraft to go with the upcoming H.P. Lovecraft Film Festival. You can click through to see more, but head's up, Not Safe For Work.


A few nights later I attended oil painter Michael Hussar's "Roadshow", at which he created a kind of sideshow figure art milieu for sketching purposes which he painted as we sketched and listed to music and drank alcoholic beverages.  Most impressive was that even the goth kids came armed with sketchbooks. Go, goth kids!

This was an unusual event; it took place in a small indie club and had some focus on the celebrity of the artist as the main attraction, but really it was about making art with props and live performance that were of Hussar's selection and style.  It would be wonderful to see more events like this, where the entertainment is based on an assumption that people will want to not only look at it and photograph it, but sketch it.

Earlier this month, I had a dream that I became excited about painting (as opposed to drawing or casual sketching) and was particularly obsessed with the moment of the brush touching the paper.  That was the moment in which I wanted to live.  As a result, when local art store Muse announced a sumi painting class taught by Yu Ming Zhu, it seemed like the perfect thing.  That class took place on Friday.

While most of my "art" from the day of the workshop is just repetitious attempts at brush strokes in which I tried to get my hand to hold the brush and move in a different way than it is accustomed, I did produce these horses (copies from a famous sumi work, though I've forgotten the name of the artist). The paper on the left was highly absorbent and sported gold flecks that are lovely in close-up; the paper on the right was machine made and held the strokes better but had a less interesting texture.


The workshop was great fun.  As a sketcher, my "specialty" is working fast and loose, but sometimes that means lazy as well, and it was satisfying to really focus on the properties of the brushes and the paper.  I think the ideas of center line strokes and side strokes, along with the basic intent with sumi of capturing physical action in the stroke, will stick with me for a while, and I'll integrate some new information into my normal, fast-moving urban sketches.

Towards the end of the workshop with Yu Ming Zhu, I mentioned Urban Sketchers and Yu Ming said, "oh, then maybe you know Don Colley!" Don Colley is an urban sketcher, and has visited our Portland group in the past. Yu Ming has met up with Don Colley to sketch on various occasions, and they have a presence in each other's sketchbooks.  We also discussed sketchbook work, and I was not surprised to learn Yu Ming uses a Pentel Pocket Brush in his accordion book (along with fountain pen, watercolors and various other materials).  It would be a pleasure to sketch with him some day, and I highly recommend his classes.

Posted by Portland Urban Sketchers at 8:45 AM 3 comments:

I was so grateful to get in some Cherry blossom sketching on Thursday (with Vicky in between the showers and sun).
Admittedly the blossoms were well passed their prime....the latest rain has done its job and scattered them to the ground but there was enough on the trees to still get the essence.


The above was a quick sketch before I met up with Vicky at Floyds...a short sun break.


The one below is on my new Stillman & Birn- zeta series sketchbook. Like some of my fellow sketchers, I may become a fan of this brand. It handled the watercolor wash very well...more experimentation to follow.


After this last sketch I started another but just got some basics down when it started to rain in earnest...so off to Floyds again to dry out.
Posted by deb rossi at 9:18 AM 3 comments:

Visiting Urban Sketcher Laura Murphy Frankstone was along for the cherry-tree sketching earlier this month, and she has posted her sketches on her blog: Laurelines. 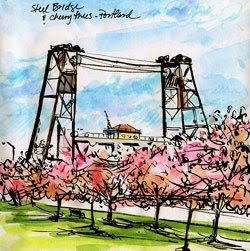 I couldn't resist cropping her blooming trees + bridge image down into our new blog-header, but you should really go check out the full-sized piece on her website, plus all the other charming scenes she captured that day too.

Thanks, Laura! And hurrah for spring. --Katura
Posted by Katura at 2:35 AM No comments:

I wasn't thrilled with my first sketch of the cherry blossoms when the Urban Sketchers were out... 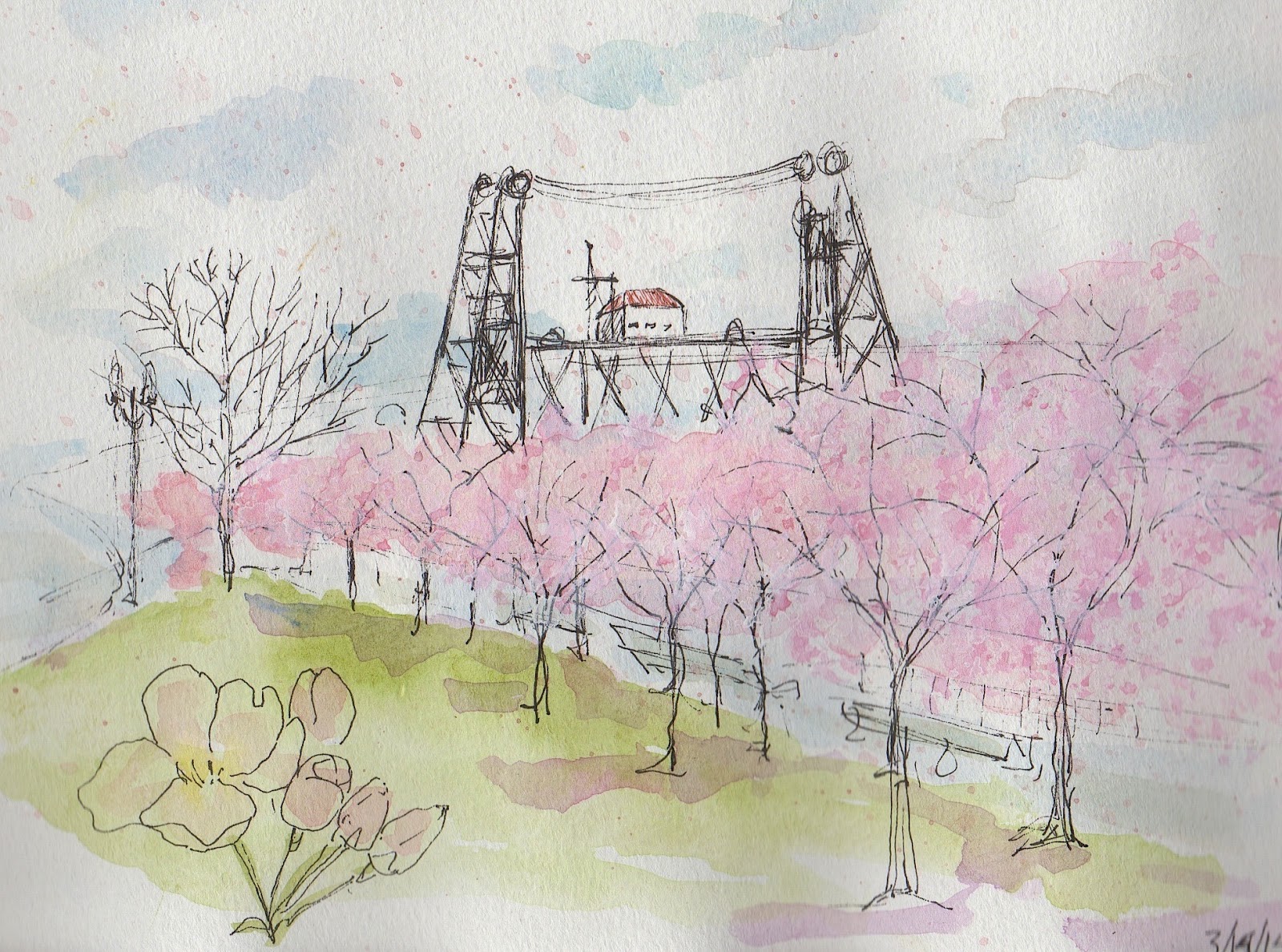 but last weekend, it was so hectic on the waterfront, I fled to some quieter corners of Portland... 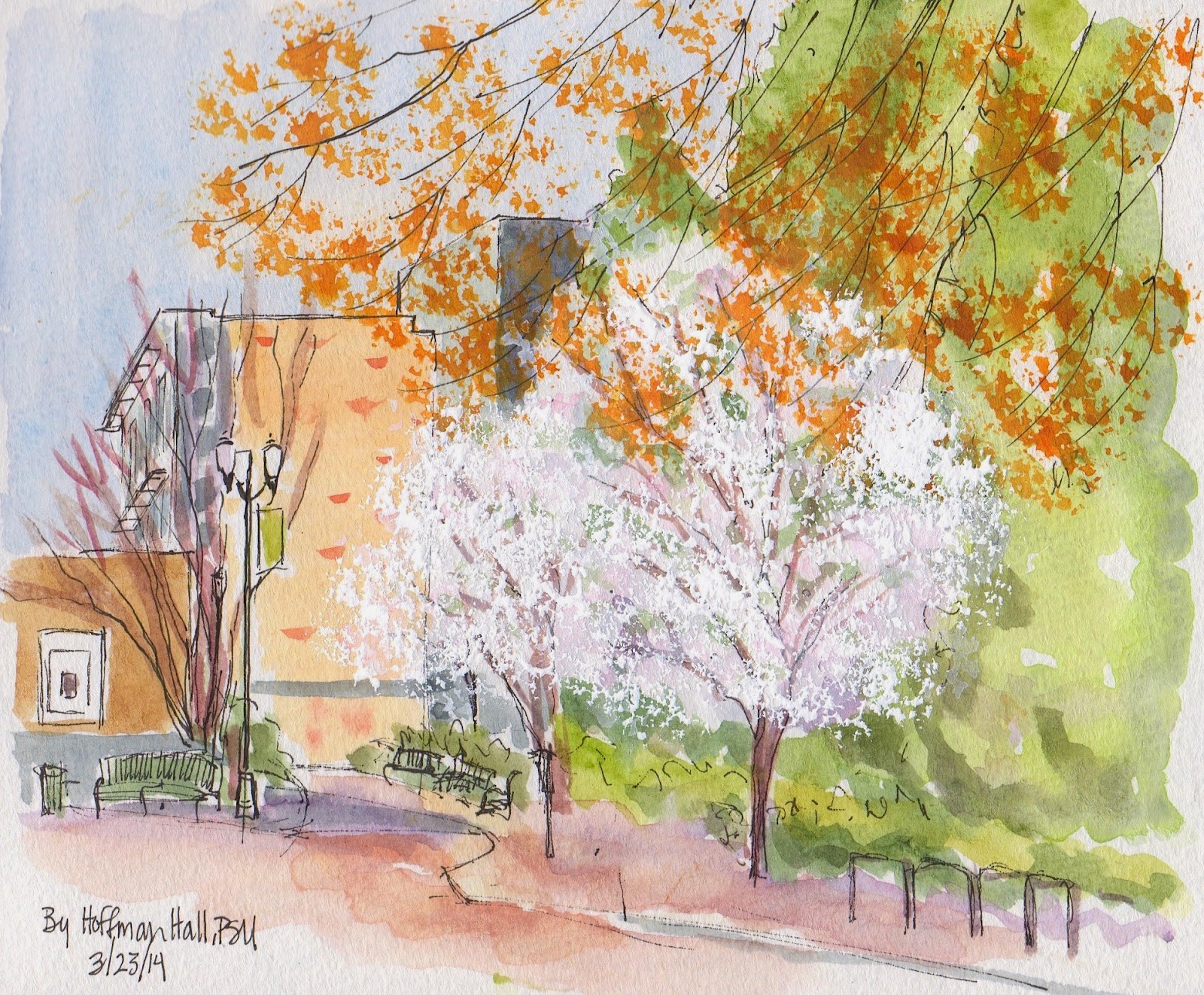 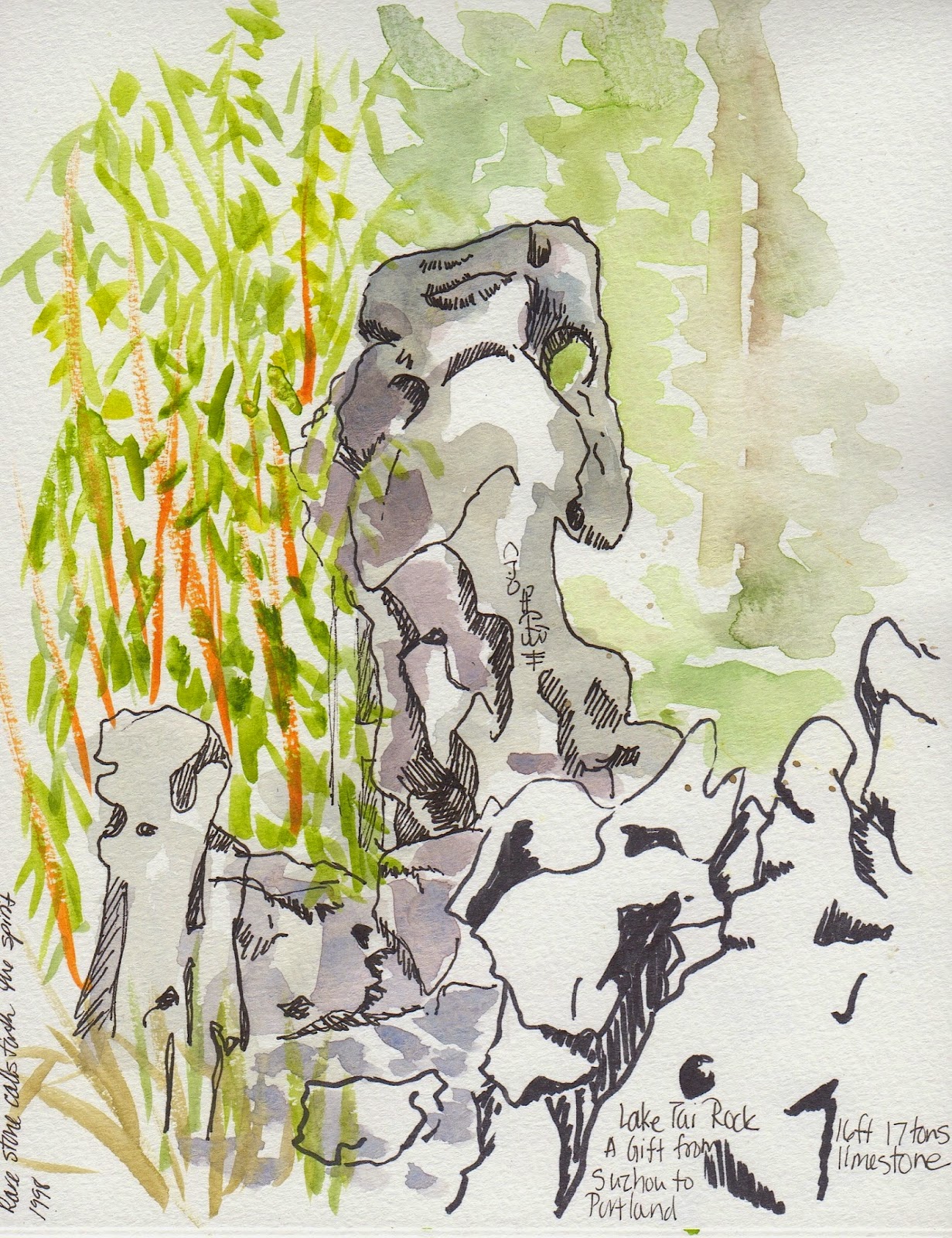 I'm still hoping for another trip to the waterfront: this Thursday afternoon for those who can join us and if the weather cooperates. 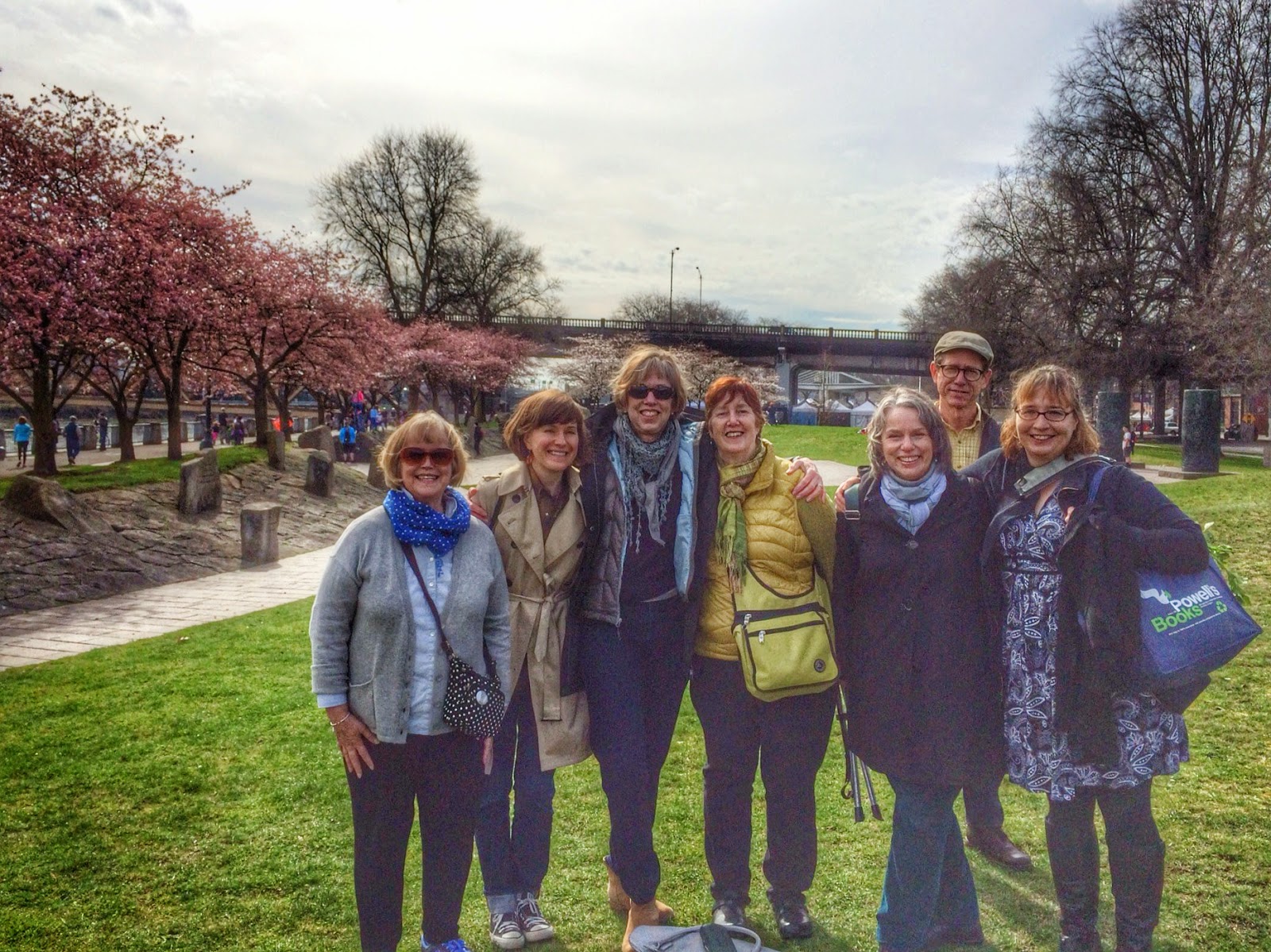 Here is an impromptu shot of some of the participants in the sketching session at Tom McCall Waterfront Park last Saturday.  It was such a lovely day of sketching! Next time, I will try to get a shot that includes everyone!
Posted by Christianna Pierce at 6:10 PM 4 comments:

What a great day.  Floyd's followed by cherry blossoms and anti-fascism protests on the Waterfront, Thai food for lunch, and then a great movie.  At the end of it all we played with Kalina's camera obscura.  It was a day of stimulation, community-feeling, and fun.

Here's my sketch offering from the day. 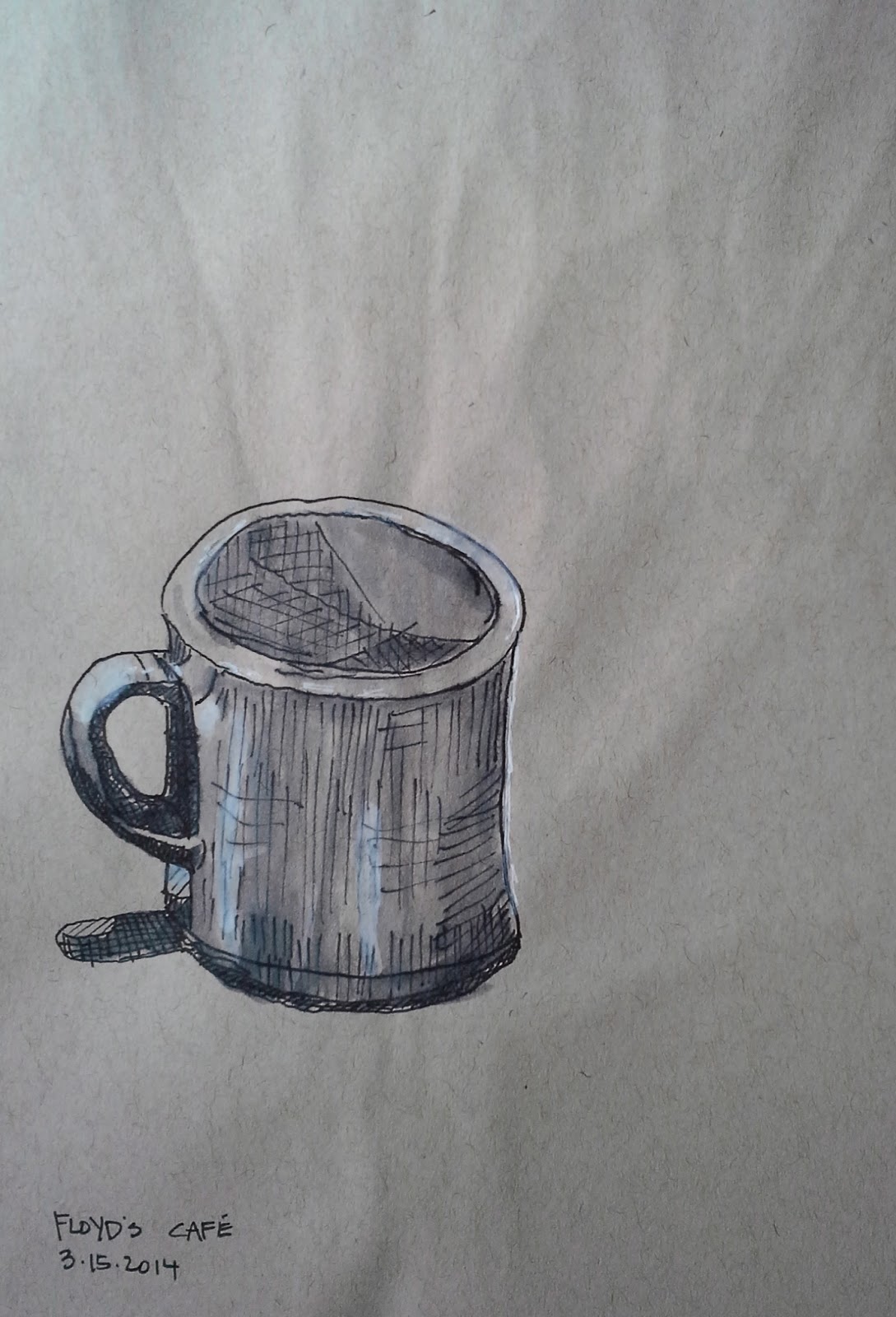 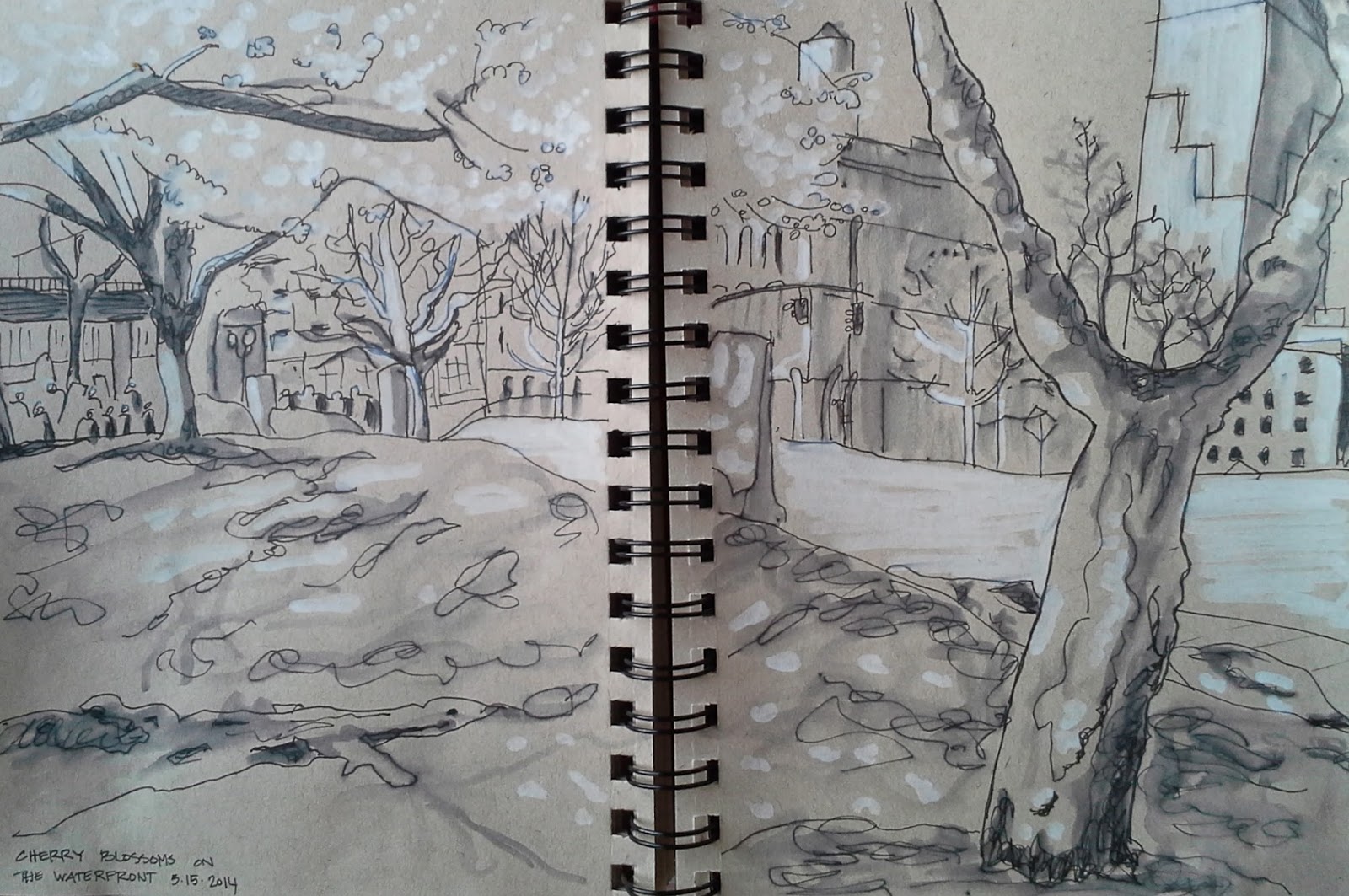 The one below is from a weekend at Breitenbush from a few weeks ago. 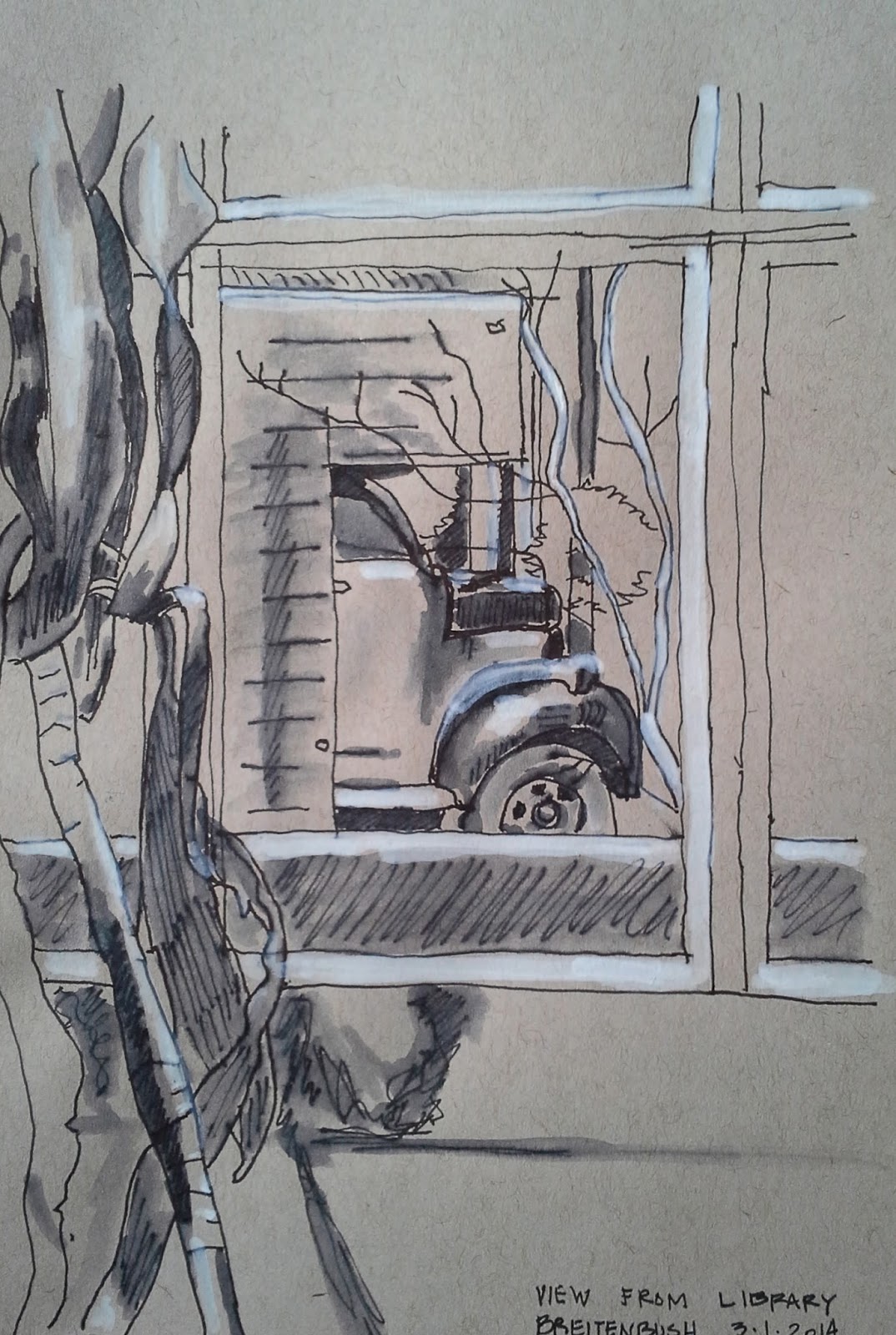 This one is from sketching at Pearl Bakery with Vicky last weekend. 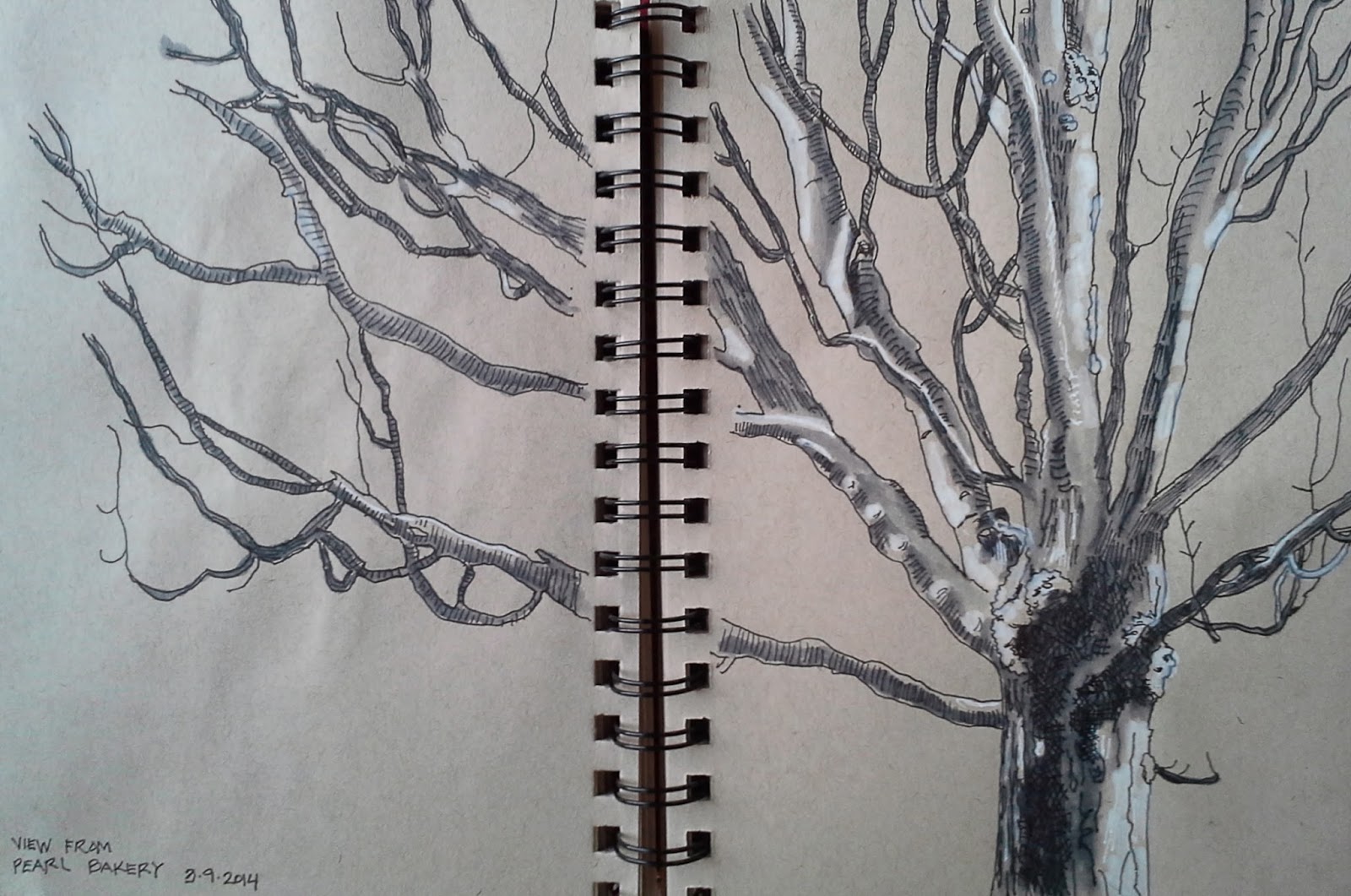 See you all next time!

Cherry blossoms are starting to bloom, so let's go sketch them!  Join us for a morning of sketching at Tom McCall Waterfront Park on Saturday, March 15! Cherry blossoms, Ankeny Fountain, Saturday Market, and Old Town/Chinatown are all nearby.  Laura Frankstone, urban sketching correspondent and lovely person, will be visiting that weekend too.