Here's the flyer for our next sketchcrawl! Please feel free to distribute. Right-click on image and select "save link as..." to download PDF.

Posted by Portland Urban Sketchers at 9:15 AM 2 comments:

I had fun working across two pages in my sketchbook for a sort of 'panoramic' view of the Portland skyline.

A great day for the worldwide sketchcrawl!
Posted by debR at 9:34 AM 2 comments: 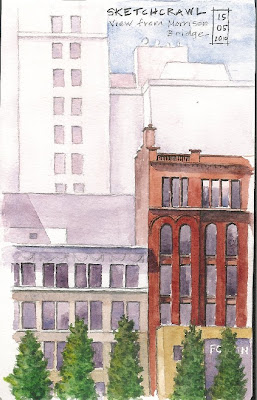 Our Portland sketchcrawl group had a beautiful sunny day for the Worldwide Sketchcrawl on Saturday.  We had twelve people participating--the most ever!  I sat with several others on the pedestrian/bike path on the Morrison bridge and did this sketch of downtown.  I started getting a serious sunburn and could only stay for part of the day anyway, so after getting a start on my sketch, I took a photo and finished it later.  My goal at future sketchcrawls is to take more of a 'quick sketch' approach but I did have fun with the interesting facades of these historic buildings surrounded by modern 'boxes'. 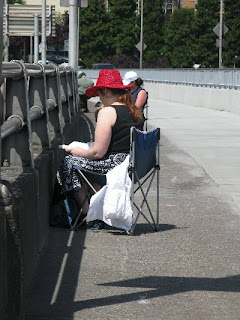 In the photo, Kalina, Alanna and Deb are sketching away.  It was a very fun day and the participants were most enjoyable to sketch with!
Posted by Janene at 8:47 AM 3 comments:

I love the view from the new bike/pedestrian path on the Morrison Bridge, especially since I get to enjoy it every day while walking to work. All those days, I have to keep going instead of stopping to draw, so it was a relief to finally get this chance to stop and record the view. The Waterfront, of course, is full of great views for sketching - this is the view looking down from the bridge. After our first meet-up, I sketched the meet-up location - Morningstar Cafe at SW 3rd & Washington - from the parking lot across the street. There are so many lovely buildings in downtown Portland, and I only managed to get started on the bottom of these ones! This was the biggest group of sketchcrawlers in Portland since I've been organizing it! We had 11 folks join us. We kind of had a 12th, but I think she was having a frustrating kind of day and didn't end up joining us. 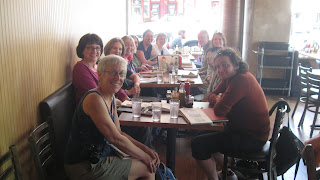 We had some new folks join us including Portland's own Bill Sharp! 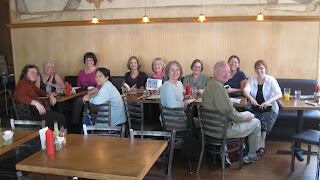 It's nice to have such a big group. Every body shares their favorite tools of the trade. 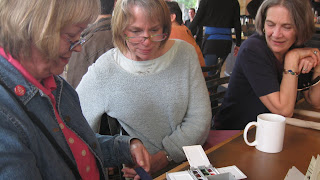 and we enjoy talking about sketching. 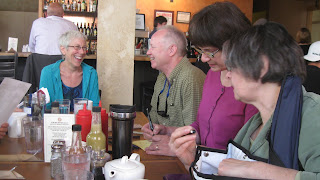 we also get to meet new folks, which is always nice. 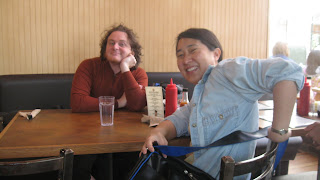 But mostly, we sketch. Here are mine:
My bagel and Deb sketching on the Morrison Bridge, looking west. 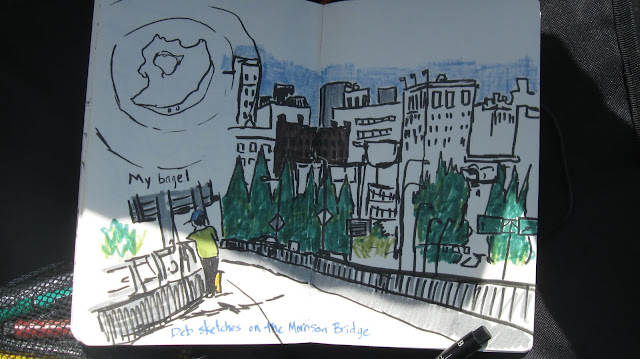 this one I actually did after the group dispersed. I went down to the south waterfront and sketched the Sellwood bridge off in the distance. 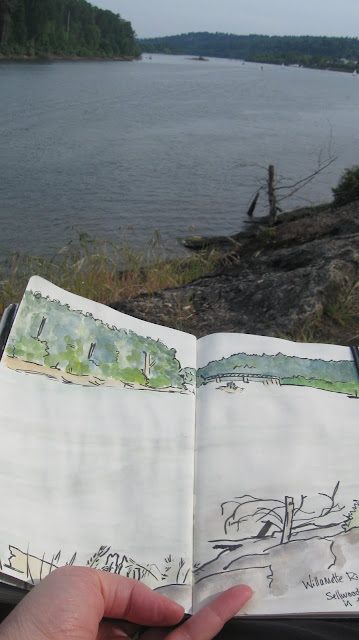 I put my feet up and decided to sketch what I saw. On the Morrison bridge:
[oh blogger, why are you turning my images forcing people to tilt their heads?] 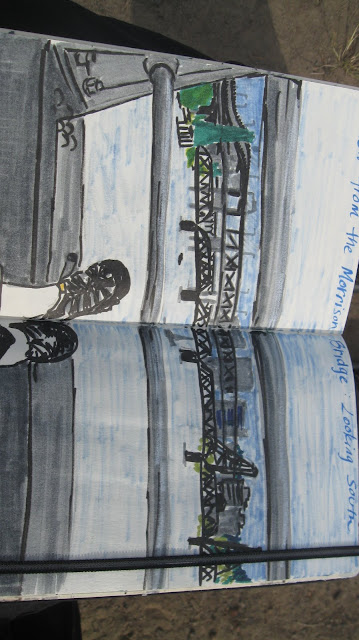 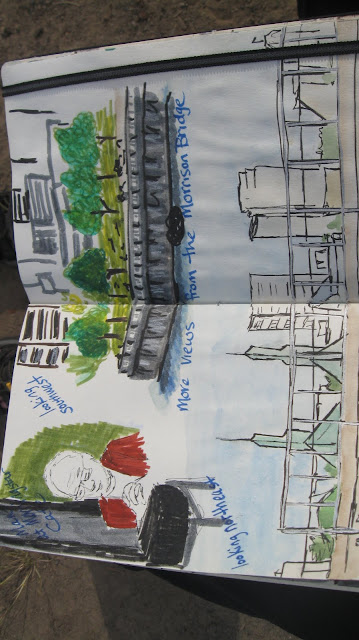 It was a great sunshiny day here in  Portland and I had a fun day of sketching. Gearing up for the big Urban Sketchers Symposium in July. Before that, though, the group is planning to sketch at King's Farmers Market on June 20. Come and join in on the fun!
Posted by Alanna Beckwith at 11:00 PM 4 comments: 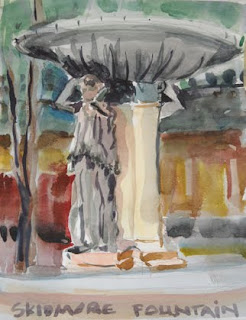 Just a few clouds yesterday, no showers - headed downtown and did  a little watercolor sketch of the Skidmore fountain. Named after one of the early residents of Portland, Fountain in his name is where early Portland residents watered their horses prior to the turn of the century.  Fountain is located just a block from the waterfront next to the West side of the Burnside bridge.
Posted by Unknown at 7:53 PM No comments: