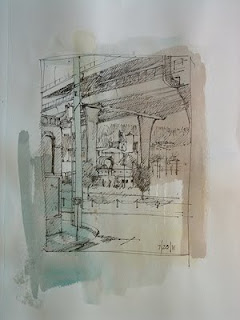 Vicky and I were starting our sketches of the White Eagle Saloon when a car parked and blocked our view....some poor planning on our part but we kind of felt that he could have chosen another parking spot one car back. Oh well! This drawing was well enough along to feel OK about it in this state. I then added a map of the site...I have been wanting to do something with maps for some time. It didn't exactly turn out as I'd hoped but the idea is still gelling and so there will be other opportunities. 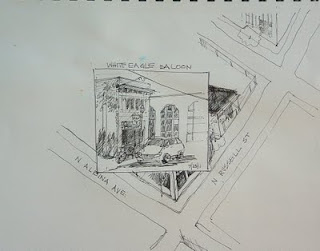 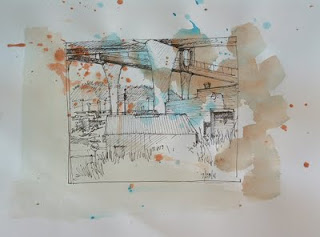 I loved the area around N Russell and think it has lots of potential so I will be going back there to explore some more. All told a 'good day'.
Posted by deb rossi at 8:49 PM 3 comments:

I joined a group of Portland Urban Sketches to take advantage of a rare sunny day and revisit the neighborhood near the White Eagle Saloon. 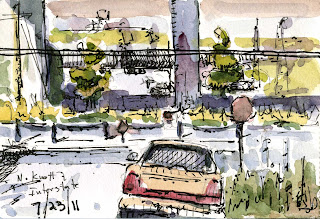 This neighborhood is sort of being gentrified but it's adjacent to freeway overpasses and rail yards that make it noisy and a brewery, which makes it smelly. 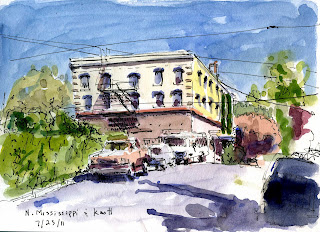 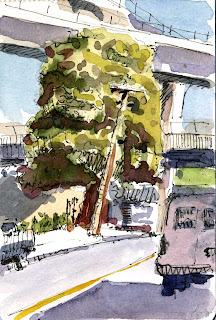 It was fun to see everyone and enjoy a day drawing in the sun.
Posted by Bill Sharp at 8:05 PM 4 comments:

Had a great time at Trek in the Park! 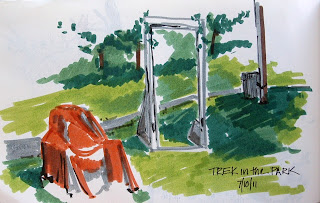 When I arrived around 2:00 I was surprised to see how many people were already set up and seated around the amphitheater 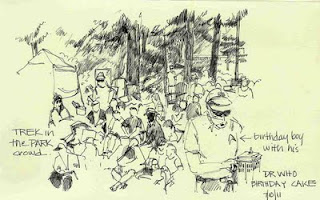 I found Kalina across the way though settled in a prime spot for viewing. This guy close by brought out a special Dr Who cake to celebrate his birthday (that day). The excitement was evident, everyone came prepared to have fun and enjoy...even if they had to be there hours before the main event. And the Atomic Arts group delivered a funny, clever and entertaining Star Trek episode Mirror, Mirror. A great day! 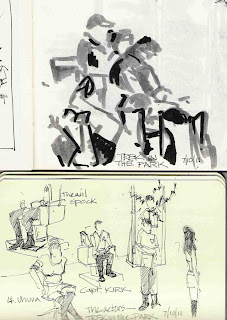 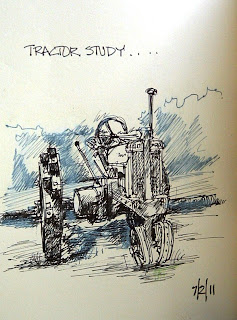 It was a pretty hot day at the Pumpkin Patch but there was some shade from which to draw some of the farm equipment and views of the hills. 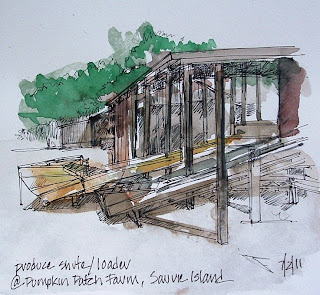 One of the other sketchers (Sidne?) identified these produce loaders for me...otherwise I hadn't a clue what they were. 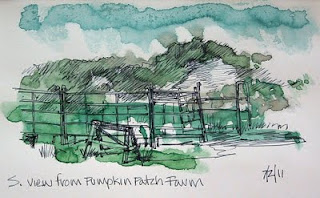 Recently four of us met up just north of Portland at Pumpkin Patch Farm on Sauvie Island, where we tried our pens at fields, the animal barn, and old farm equipment. A couple days later on the 4th of July, my partner and I headed south to Oregon City, the oldest incorporated town west of the Rockies. I tried to capture the complicated Willamette Falls and paper mills. Willamette Falls was originally a natural wonder, but now it's an industrial cyborg designed to harness energy for the mills. Complicated but fun to draw. Sticking with our Balloon Theme: Portland's 'Up' House

Today I went downtown to sketch Portland's 'Up' House. According to the Oregonian newspaper http://www.oregonlive.com/portland/index.ssf/2011/06/in_downtown_portland_a_lawyer.html, this 1894 Victorian was threatened by our public transportation agency with possession by eminent domain so that a new lightrail turnaround could be built. The lawyer who works in the house had refused to sell. Eventually, the surrounding property was purchased by Portland State University and a new residence hall is now being built around the house. The relationship between the attorney and the construction company is good and this week the company helped to anchor 400 helium balloons to a cord that runs through the chimney. As I was sketching, a few other people came by for photos. I heard one young woman say, "This is the kind of thing that makes me so glad I live in Portland." I have to agree. 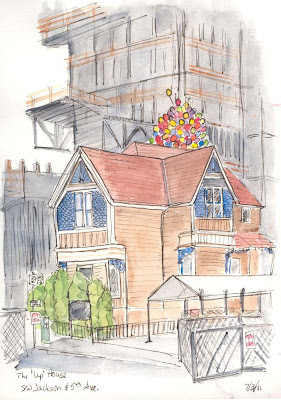 I did the sketch quickly while standing and it's kind of wonky, but I'm glad I was there to record it before the balloons deflate. Portland Urban Sketchers, you might want to get down to capture this--especially if you're an architect!
Posted by Vicky at 6:38 PM 3 comments: